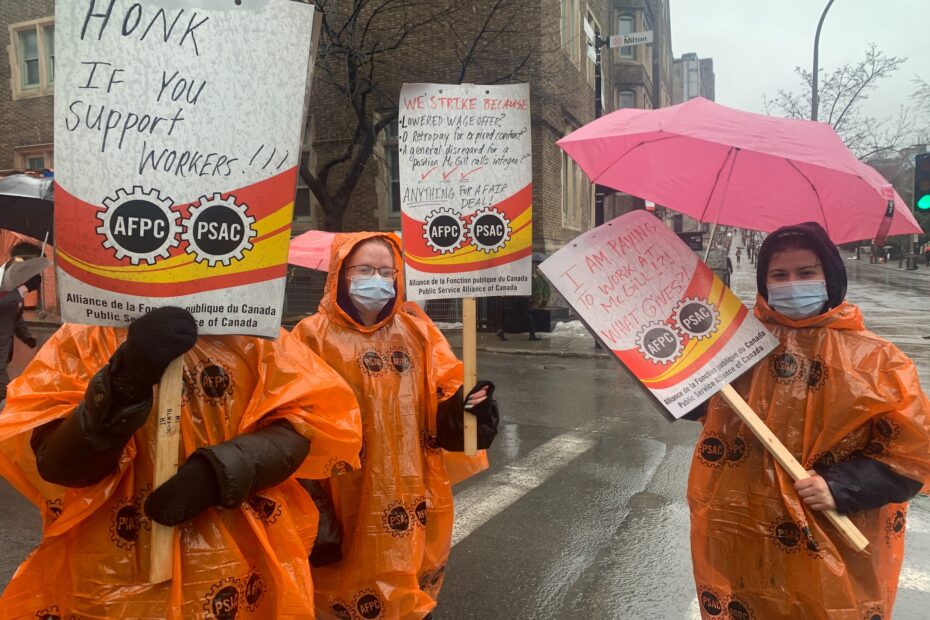 On March 7, floor fellows in the Association of McGill University Support Employees (AMUSE) voted in favor of a strike mandate. Negotiations with the university have been ongoing since June 30, 2020, when the union first met with McGill to discuss their priorities for the next Collective Agreement (CA) – the previous CA expired shortly thereafter, on July 2, 2020. The union’s proposals have included both monetary and non-monetary requests: among the monetary requests are raised wages, an improved meal plan, and retroactive pay for the bargaining period; the non-monetary request for McGill to allow harm-reduction practices in residence has been conceded for now, in order to focus on the union’s monetary requests.

As of writing, McGill has not met the union’s demands. The university is offering minimum wage – which is currently $13.50/hour – for 13 hours of work per week. In an interview with the Daily, AMUSE President James Newman explained that the union initially asked for $18/hour (the same wage which the Fédération des travailleurs et travailleuses du Québec is advocating for), to which McGill countered a $13.64/hour wage. Later, the university retracted this offer, returning to the minimum wage. As of May 1, the minimum wage in Quebec will be raised to $14.25/hour; Newman said that the university dropped their $13.64/hour offer in anticipation of this raise. McGill told the union that the provincial minimum wage increase exceeds the university’s initial bargaining mandate, Newman claimed. According to a presentation* by Student Housing and Hospitality Services (SHHS), SHHS makes $62 million/year, so the university should be able to afford an $18/hour wage, Newman said. “Suzanne Fortier makes $860,00 a year and she’s not even first aid certified,” he joked, pointing out that paying floor fellows $16/hour (what the union is currently proposing) would cost 47 per cent less than this salary.

McGill has pointed to the fact that floor fellows are provided housing as a justification for their low wages, Newman said. According to calculations which the university sent to AMUSE, the hourly value of housing, combined with the current hourly wage, amounts to around $30/hour for downtown campus floor fellows and around $25/hour for Macdonald campus floor fellows. In an interview with the Daily, VP Floor Fellow Christian Tonnesen highlighted that room and board is a taxable benefit, resulting in tax deductions from floor fellows’ pay checks. “We’re taxed at full fair market value, which […] is astronomically high,” Tonnesen said, estimating that his own taxes are around $1600/month. These deductions have resulted in net-zero paychecks for many floor fellows, and when the deductions exceed one paycheck, McGill deducts money from future paychecks. “We have a snowball effect of where we have high deductions and high taxes, which then cause a rollover to the next paycheck and the next paycheck,” explained Tonnesen.

When a floor fellow’s paycheck does not cover the high deductions for their housing, McGill may also deduct money from other university jobs held by the floor fellow: “Floor fellows who have other jobs are seeing their pay from those jobs deducted to cover the absurd deductions from their floor fellow jobs,” Newman told the Daily. “We have never gotten a clear answer from McGill about why this is happening […] People are paying for the privilege to work at McGill,” he continued. Tonnesen recounted that one former floor fellow had to take on multiple jobs at McGill to pay for the deductions associated with his floor fellow job, and claimed that he has spoken to many floor fellows with similar experiences. While this has been a common occurrence this year, it is highly unusual: “I’ve never had paychecks this low before […] having worked this job for three years I’ve never seen it this absolutely buck wild before,” Tonnesen said. However, the university has maintained that the way they pay for deductions has not changed, per Tonnesen.

Alongside housing, the university provides a meal plan to floor fellows; however, Newman drew attention to several shortcomings in the current plan which the union hopes to rectify in the CA. According to him, the meal plan has remained stagnant at about $4500 per academic year – by Newman’s calculations, this comes out to about one and a half meals per day, given the rising prices of cafeteria food caused by inflation. Moreover, the meal plan is only valid in McGill cafeterias, but not all residences have a cafeteria nearby: while Solin Hall includes kitchens in every unit and residents at the Macdonald Campus make use of communal kitchens, these residences lack cafeterias. As such, floor fellows at these residences must travel to the downtown campus if they wish to use their meal plan – and McGill does not compensate floor fellows for the cost of commuting to campus from a faraway residence, Newman said.

Tonnessen explained that in the case of Solin, floor fellows are provided with a saver meal plan, which has less money allocated to it than a traditional meal plan; the rest of the plan is made up of grocery cards. Newman also pointed out that the university did not change Solin floor fellow’s meal plans to account for remote activities during the 2020-2021 Academic Year – floor fellows still had to travel to campus to use their meal plan despite the lack of on-campus activities. The union has been advocating for the option of receiving half of Solin floor fellows’ meal plans in the form of grocery cards, but McGill has refused.

Furthermore, the fact that McGill houses floor fellows gives the university “a kind of leverage that very few employers have over their employees,” Newman said. During the strike vote, members raised concerns that the university may cut striking workers off from their meal plans or evict them from their dorms; anticipating these concerns, AMUSE requested that their parent union – the Public Service Alliance of Canada (PSAC) – fund alternative accommodations for striking floor fellows. During the strike actions of Saint Patrick’s Day weekend, PSAC arranged access to housing and food outside of McGill to “neutralize [the potential] threat” of McGill evicting striking workers, per Newman.

McGill is also refusing to retroactively pay AMUSE members, which Newman said “is highly unusual […] Retroactive pay is a basic component of every CA.” Typically, once a new CA has been signed, any new wage increases will be made retroactive to the expiry of the previous CA – this way, employers do not get the advantage of a wage freeze, which may encourage them to stall negotiations so they do not have to pay higher wages. While refusing retroactive pay is unusual, McGill has now done it twice this year – McGill is refusing to retroactively pay MUNACA members who retire prior to the signing of a new CA.

Working an emotionally taxing job at minimum wage has led many floor fellows to become disenchanted and burned out, sources told the Daily. “McGill has never really come around to taking seriously the notion that what floor fellows do is work,” Newman said, adding that he’s gotten the impression that the university thinks of floor fellows as “special students […] who should be happy with whatever McGill gives them and jump at the opportunity to do extra work.” He added that the university’s opposition to harm-reduction practices has caused “moral injury” to many floor fellows, who are now being treated as “discount security guards” mandated to report drug paraphernalia despite their opposition to criminalizing drug use. “If you’ve ever been curious about what burnout is like, apply to be a floor fellow.”

AMUSE is circulating an open letter which students can sign to support the strike efforts. Newman hopes that the AMUSE strike empowers other workers: “We are hoping for a victory here that will inspire other workers, especially residence assistants in universities without unions to organize and fight for a living wage and fair working conditions. Your support for us today will pay dividends for all workers tomorrow.”

*this presentation was not leaked to the Daily by Newman or Tonnesen.

Updates provided by Christian Tonnesen: Tonnesen would like to issue a correction that the value of the room is around $1600, with his taxes averaging closer to $750 per month. However, that tax rate is still wildly above what someone paid at $13.50 per hour should pay.Tonnesen would like to clarify that while he cannot confirm that a Floor Fellow took on multiple jobs, it is not outside of the realm of possibility. It is confirmed, however, that many Floor Fellows have dropped jobs at McGill as it’s not worth it, given the pay is just deducted to cover Floor Fellow deduction.
Tonnesen would like to clarify that the proposal made to McGill by the Union at the time of publishing opted to give Solin Floor Fellows the option of receiving half of their meal plans entirely in the form of grocery cards, not the entirety of the meal plan.