We have always known about McGill’s predatory professors 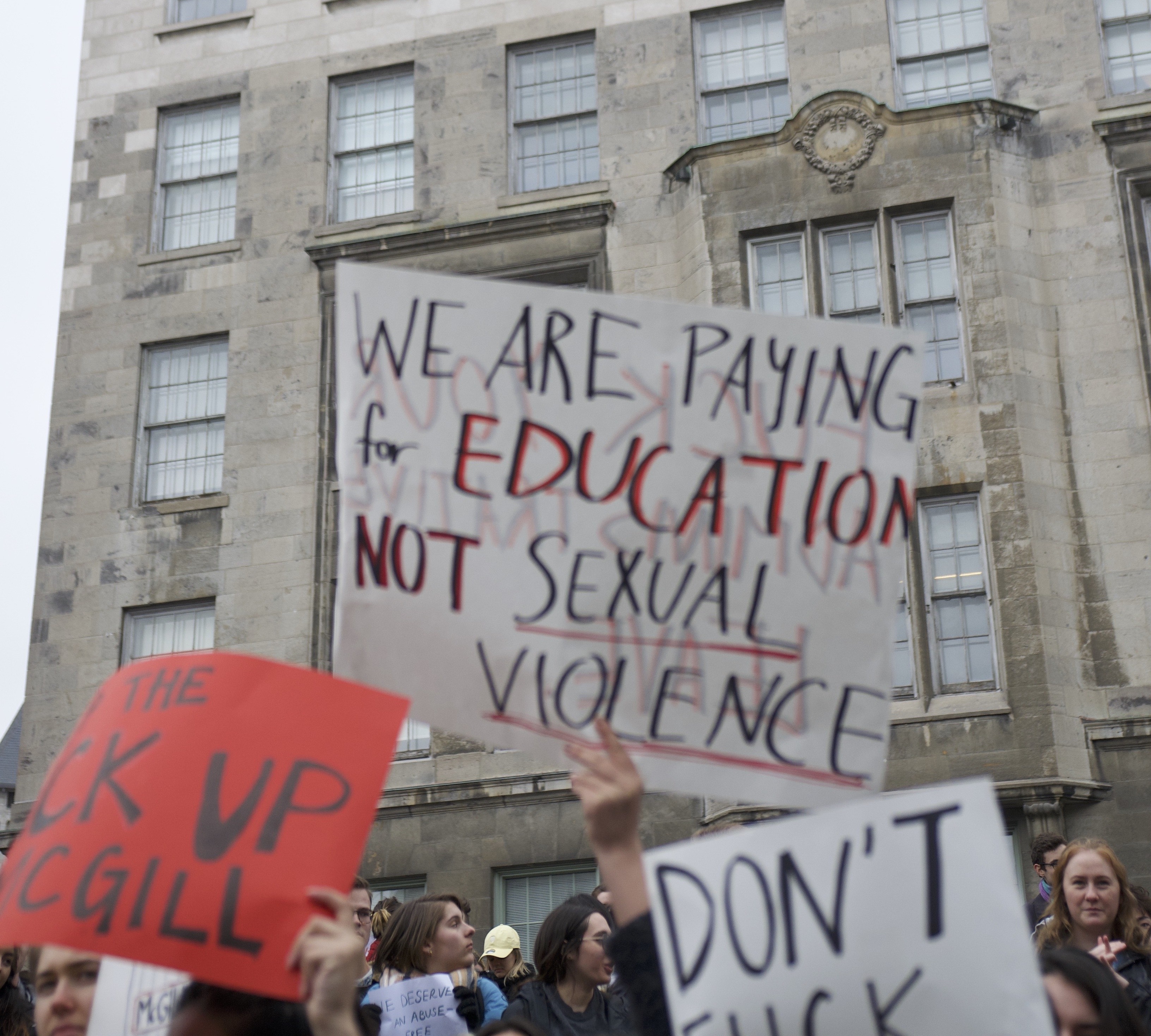 “… but don’t you think McGill cares about students?” a reporter for CTV News asked. He seemed unconvinced by the McGill Daily’s account of administration responses to alleged acts of sexual violence committed by professors. On April 5, 2018, SSMU held a press conference for external media outlets regarding the student-circulated petition requesting a third-party investigation into the mismanagement of student-professor sexual violence allegations on campus. For the world outside of the McGill bubble, this story might have seemed groundbreaking.“McGill faces its own #metoo moment” read the the CBC article’s headline, as if McGill was new to disclosures of sexual assault. 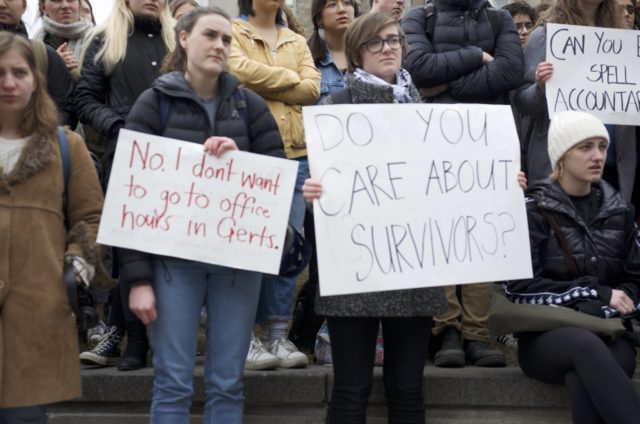 Picture by Claire Grenier of the April 11 McGill+Concordia students walk out in protest of the universities’ mismanaging of cases of gendered and sexual violence committed by professors.

The phenomenon is hardly new, yet disclosures have only recently been brought to the attention of newspapers, blogs, and other formal media sources. One of the most well-known articles, “Let’s talk about teachers,”  reported on the subject as early as September of 2015. In the years following the piece’s publication, a series of annual disclosures touching upon gendered and sexual violence in university have been published by the Daily, the CBC, and even professors themselves. (“Let’s talk about grey areas”, “The vicious circle of professor-student relationships”, “McGill professor accused of sexual misconduct”, “Islamic Studies Institute in the spotlight following abuse allegations against professor”, “McGill’s Shame Continues”, “McGill’s dentistry faculty criticized over its handling of sexual assault, harassment allegations”).

The lack of documentation of survivor accounts does not warrant McGill’s silence. If anything, it highlights the difficulty of reporting, disclosing, and engaging with the administration as a survivor on McGill campus. Oftentimes disclosures are made even more difficult, especially in the academic context, due to the constant lack of belief in survivors and their experiences with gendered and sexual violence. Given the overall despondency of the administration, survivors are left with few other places to turn in order to report their experiences, seek accommodations, and alert their peers of possible dangers on campus. When the institutions that are meant to protect students do not, students are pushed to resort to their own tactics to create spaces on campus that will.

The lack of documentation of survivor accounts does not warrant McGill’s silence. If anything, it highlights the difficulty of reporting, disclosing, and engaging with the administration as a survivor on McGill campus.

On April 9, the McGill Daily sent out a survey to collect testimonies from students confirming the existence of these systems of reporting gendered and sexual violence through “word of mouth,” or student to student warnings. Dozens of testimonies flooded the Daily inbox within the span of 48 hours, and many more are still coming. The scale and specificity of this system attests to the degree in which McGill has neglected its students’ outcries, as well as the long history of student solidarity on campus in the face of McGill’s ongoing negligence. Included here are some of these testimonies:

These underground systems of communication and disclosure between students come as no surprise given the current reporting policy. When requested to explain the current policy for reports of sexual violence committed by professors, SSMU VP External Connor Spencer wrote to us:

“Normally a student, when making a complaint around sexual violence, would refer to the Policy Against Sexual Violence that was passed by the McGill Senate on December 1, 2016. However, because this policy is not a stand-alone policy and instead refers to the Code of Student Conduct, students cannot pursue complaints against faculty through this policy. Instead, they can refer to the Policy on Harassment, Sexual Harassment and Discrimination — which is a stand-alone policy — where an assessor, who may or may not have training in sexual violence, would receive their complaint and assess whether or not there is enough for them to go through a formal process. This policy, however, does not cover sexual assault, which would instead be processed through section nine of the Regulations Relating to the Employment of Tenure Track and Tenured Academic Staff.  Yet, [these regulations are part of] another policy over 20 pages long. All formal complaints are sent to the dean of the faculty where the academic staff is employed. How complicated, hidden, and inaccessible this process is, is shown by the fact that on the OSVRSE site there is a flowchart explaining how to report a complaint against a student, but none for how to file a complaint against academic staff.”

The process to report sexual harassment and assault perpetrated by professors is both convoluted and disjointed, as its steps are located across multiple jargony documents. It is nothing short of dysfunctional. Survivors deserve better. We deserve better. Without usable systems to hold professors accountable in place, students have been forced to implement their own peer-based warning system.

Without usable systems to hold professors accountable in place, students have been forced to implement their own peer-based warning system.

It seems to be that word of mouth, which is far from offering the protection of a stand-alone policy, is the only available system for students to protect themselves. McGill is guilty of nurturing a culture of gendered and sexual violence on campus by relying on a deeply flawed policy to report sexual harassment perpetrated by professors, and for responding poorly when reports of sexual violence at the hands of professors are submitted. The McGill administration hasn’t established a system that protects students in these situations, forcing students to resort to measures such as, illegal, public accusations against professors on stickers posted in McGill buildings. These are only the first symptoms of the deeply rooted student discontent and distrust in McGill administration’s intentions regarding gendered and sexual violence on campus.

This lack of trust in the administration has only been further bolstered by the administration’s insufficient response to SSMU’s request for a third-party investigation into the mismanagement of sexual violence allegations against professors within the Faculty of Arts. McGill administration’s response has been both inappropriate and, quite frankly, insulting. They first issued an overly generalized and standardized statement on McGill’s handling of sexual assault allegations. Later and more notably, Vice-Principal Manfredi’s individually addressed a statement to SSMU VP External Connor Spencer, dismissing the claims made in the petition and the gravity of the sheer number of signatures acquired. Vice-Principal Manfredi’s individual address conveniently neglected that more than 1,000 students and 40 student associations signed the petition at the time of his response. These actions are an insult to the student body. Not only was the petition moved by SSMU at large and not Spencer individually, but also it has received wide support across the entire student body.

Vice Principal Manfredi’s response to the student petition requesting a third-party investigation into the administration’s mismanagement of sexual harassment cases. The highlights show the two font sizes, the second being a copy from Manfredi’s individual address to SSMU VP External Connor Spencer.

The final response sent by the administration five days later on April 10, was yet another standardized statement about the general policy procedure with an added copy and paste (see image above) of Vice-Principal Manfredi’s message to Spencer (a mistake made clear by the fact that the font style and size of the later portion of the message had not even been changed). The administration’s response claims that “our University does not tolerate sexual misconduct in any form,” but the continued presence of professors commonly known to be predators indicates otherwise. The McGill community deserves a response that addresses the past and present failings of the administration, and actively supports survivors of gendered and sexual violence. McGill has to drop the act, and better agree to launch a third-party investigation into its mismanagement of cases of sexual violence, or find themselves hoisted by their own petard. This is bigger than another CBC article slamming McGill. The petition and the existence of this informal system of warnings between students are testaments to the pervasiveness of the violence perpetrated on our campus and McGill’s historic inaction. We deserve change. And we are demanding it now.

The survey entries have been edited for clarity.

*those names have been changed for anonymity

If you want to add your testimony to the survey about the informal system of warning between peers, we are still interested in hearing from you, simply click here!

You can sign the open letter calling for an external investigation into the office of the Dean of Arts here.

You can find more information on The Sexual Assault Centre of the McGill Students’ Society (SACOMSS)’s services here and here.

You can find more information on reporting, disclosures, and legal action at McGill here.