The curious case of the peaceful anti-police brutality protest 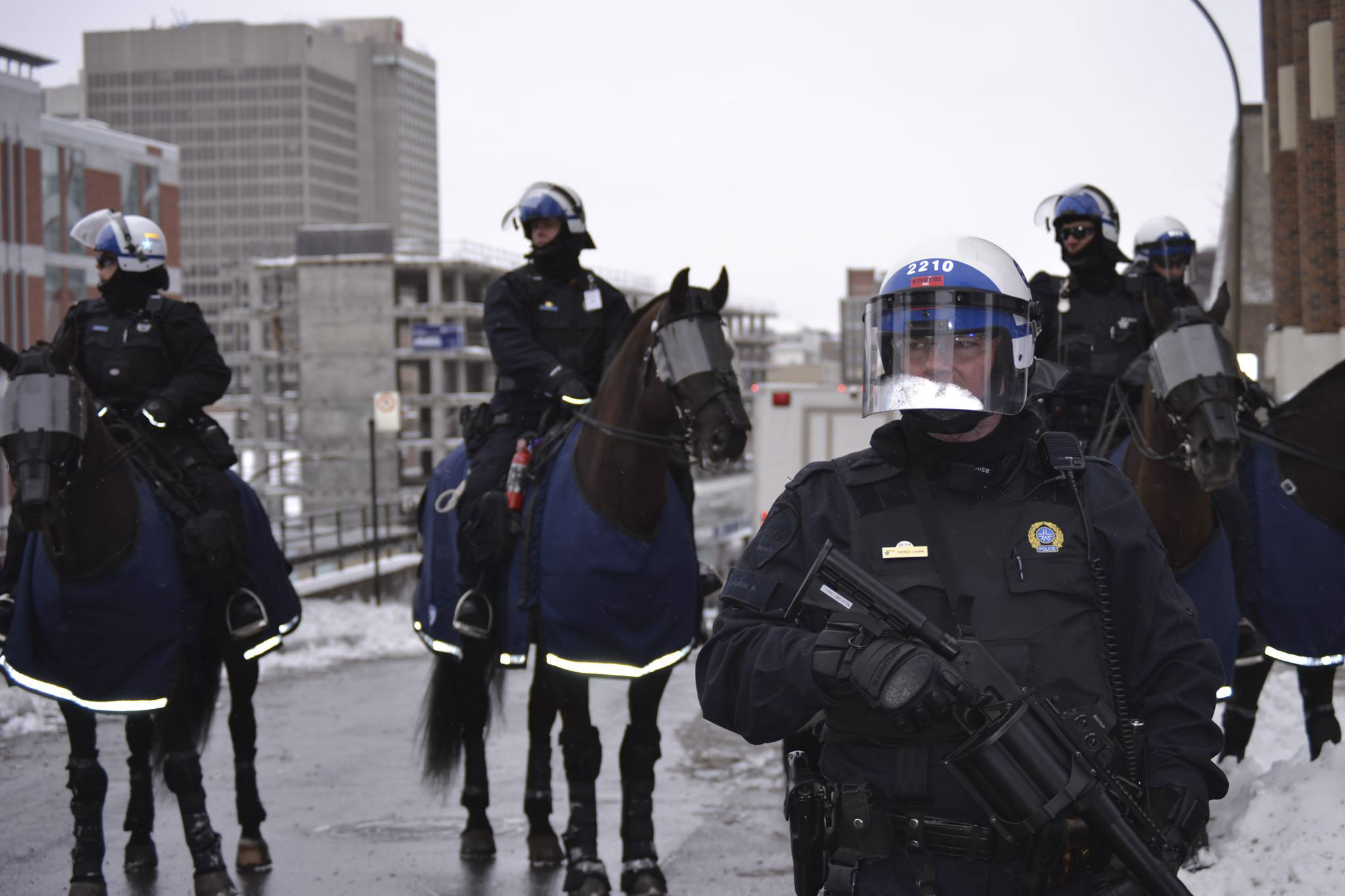 Two weeks after the march took place, demonstrators and journalists who regularly attend Montreal anti-police brutality events are still questioning why the police behaved so differently this year.

In an interview with The Daily, Jennifer Bobette, a Montreal-based artist and COBP sympathizer, said that the press conference held by the Standing Committee for the Support of Demonstrators (SCSD) the day before the demonstration “helped a lot.” SCSD called “on civil society to attend, whether to participate in the protest or to simply be a witness to what will occur.” SCSD reasoned that the SPVM would act with more restraint if they were aware that the march had a wide audience.

Bobette also spoke about the barbeque that took place at Parc La Fontaine right before the march. “[The barbeque was] to offer the family, the old people, the kids, […] a spot to exchange about police brutality in a calm atmosphere,” Bobette said.

“[The barbeque was] to offer the family, the old people, the kids, […] a spot to exchange about police brutality in a calm atmosphere.”

Franklin Lopez, who was covering the demonstration for subMedia.TV, told The Daily, “It was a peaceful march for the most part, people got their rage out, and then at the end, people got on the metro and went home.”Nevertheless, many who attended the demonstration claimed that protesters did not act differently from previous years. Matt D’Amours, a reporter at the Link who attended the march, told The Daily, “Before the march started, they had an effigy of a police officer as a pig, and it was a piñata that they whacked. So the tone, the discourse was hardcore, it was militant, it was anti-police.”

D’Amours, who has attended many demonstrations in Montreal, claimed that the difference this time was that the police were less visible. He believes that heavy police presence at the beginning of previous years’ demonstrations may have played a role in provoking violence.

Katie Nelson, a Concordia student activist, agreed. Nelson told The Daily, “In one of the most violent protests that happens in Montreal every year, no violence happened because no police were there. I think that speaks a lot.”

Nevertheless, while the police were less visible this year, riot police still followed the march on parallel roads. For this reason, Jaggi Singh, a Montreal-based activist, believes that the police were not showing any restraint at all.

“In one of the most violent protests that happens in Montreal every year, no violence happened because no police were there. I think that speaks a lot.”

“This year was profoundly violent,” Singh said in an interview with The Daily. “The presence of hundreds of riot police, the helicopter, the history of this demonstration, meant that it was a profoundly violent place to be, not because of any particular actions of protesters, but because of the police.”

Singh was reluctant to speculate as to why the police acted differently this year. “I feel like we can’t know that unless we’re a fly on the wall in a police station,” Singh said. “And even then, there are a lot of independent factors at play.”

SPVM spokesperson Laurent Gingras told The Daily that the SPVM adjusts its strategies according to what happens, but Gingras did note one difference this year. “[The protest] was not legal in the sense that they did not give us an itinerary, but it was still nonetheless tolerated,” Gingras said.

Last year, the police immediately stopped the march by declaring it illegal according to municipal bylaw P-6, which requires an itinerary to be submitted to the police prior to demonstrations. Police also issued fines to individuals for “[obstructing] vehicular traffic on a public highway,” under Quebec Highway Code Section 500.1. However, the courts ruled in favour of many who contested these tickets, and in November 2015, a Quebec Superior Court judge ruled that the use of the section is invalid, claiming that it violates constitutional rights.

“The only reasonable explanation I can find is that they’re just trying to save public image.”

Aaron Lakoff, a community organizer involved in supporting the victims of police brutality and the news coordinator at CKUT Radio, said in an interview with The Daily, “The fact that they did not intervene in this demonstration is really based on the fact that they’ve been stripped of those legal mechanisms by which they were cracking down on us before.”

However, D’Amours, who has been ticketed by police for “obstruction of roads” at other demonstrations in Montreal, said, “In no way do I think that the police were hamstrung on the evening of the police brutality demo. They still have tons of tools at their disposal if they wanted to clamp down on a protest.” D’Amours instead pointed to “PR reasons” as a reason why the police allowed the march to take place this year without detaining, assaulting, or ticketing protestors.

The SPVM’s poor public image worsened in December when an undercover officer pulled out a gun at a protest. Nelson, who was hospitalized as a result of this protest, told The Daily that “the only reasonable explanation I can find is that they’re just trying to save public image.”

Reflecting on the SPVM’s worsening public image, Bobette said, “More and more the SPVM are fucking up [with] their profiling, their police repression toward ethnic people in Montreal North, or the social cleansing that they are doing downtown.”

Although the lack of violence at the March 15 demonstration was seen as a victory, D’Amours was cautious in assuming that the police will continue to behave this way in the future. “I’m not convinced that this is going to be the strategy, that [this] tactic is going to continue to be applied night after night,” he said.

Bobette was optimistic about a rise in attendance in future demonstrations. However, Nelson argued that protestors’ fear and anxiety will not disappear. “Even if they completely turn around tomorrow and apologize for all the injustice and all the violence and take accountability for all the things that have happened, I don’t think people will go into protests feeling safe,” Nelson said.