Organizers to hold another protest this week 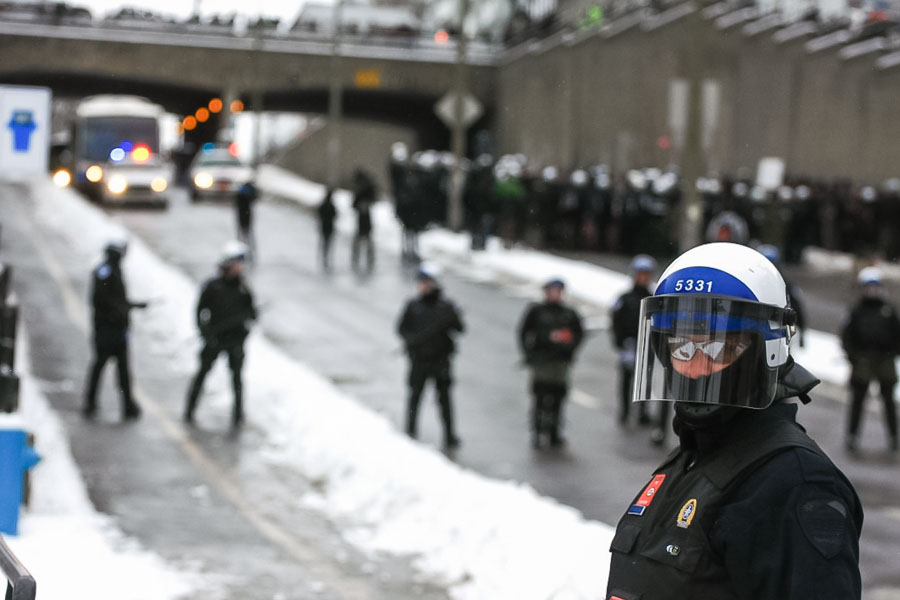 Around 100 demonstrators gathered yesterday at the intersection of Berri and Ontario to participate in the 19th annual anti-police brutality march. Alain Magloire, a man who was homeless and mentally ill, was shot and killed by a Service de police de la Ville de Montréal (SPVM) officer in February 2014 at this location.

“There is a [large part] of society that approves of police brutality, unfortunately,” one demonstrator, who wished to remain anonymous, told The Daily. “They think that it’s being done for them. It’s [as if] they live vicariously through the killings of others, carried out in their name by the authority.”

While the demonstration was planned to start at 3 p.m., more than forty police officers had already taken their places around Berri and Ontario by 2:30 p.m., including one squad of police on horseback and at least two squads of police on bikes.

At 3 p.m., the SPVM announced that the demonstration was legal because its location had been disclosed to them beforehand. However, the SPVM also declared that marching would be illegal, as a clear route itinerary was not provided.

Under municipal bylaw P-6, groups wishing to organize marches must provide their itinerary to the SPVM at least 24 hours in advance. During last year’s anti-police brutality march, nearly 300 demonstrators were kettled and fined $638 for participating in a march declared illegal under P-6.

Riot police trapped the demonstrators at the underpass nearby, where they were kettled for the rest of the protest. Two student journalists from The Link, Zach Goldberg and Jonathan Cook, were among those who were kettled.

As the kettling took place, two other demonstrations were happening elsewhere: one on the corner of Maisonneuve and Berri, and another on St. Laurent. A total of 95 people were arrested, 92 of whom were arrested under article 500.1 of the Highway Safety Code, which makes it illegal to “occupy the roadway […] so as to obstruct vehicular traffic.”

According to the SPVM’s Twitter account, the demonstrations were dispersed around 4:30 p.m.. The kettling on Berri had ended and the street was re-opened to traffic by 5:30 p.m..

The Collective Opposed to Police Brutality (COBP), which organizes the annual anti-police brutality marches, is planning to hold another demonstration on March 22, called La St-Patrak, to coincide with Montreal’s St. Patrick’s Day Parade.

According to COBP’s website, La St-Patrak will take place on the same day as the parade because the organization wishes to “denounce the fact that we no longer have a right to protest in Montreal.”

Speaking at a news conference on March 12, Montreal mayor Denis Coderre hinted at possible repression of the demonstration. “Let’s be clear, [the parade is] a celebration and nobody, nobody, will prevent this magnificent celebration,” he said.

“People who are going to attend the parade have nothing to fear from us,” COBP noted on its website in French. “But they should, maybe, be wary of the police officers, who are known to be armed and dangerous to the population, especially to those who are activists or marginalized.”