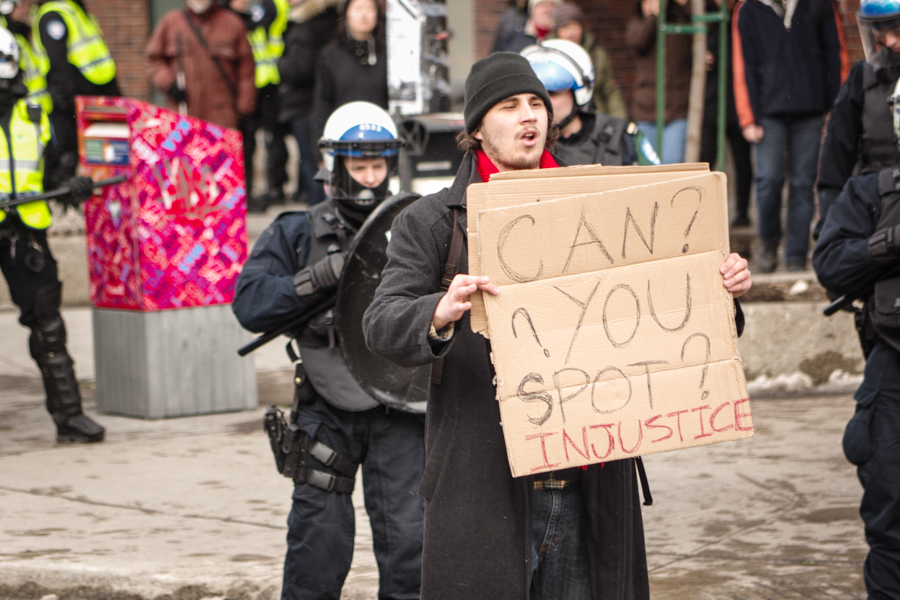 The 18th annual anti-police brutality march ended this Saturday not long after it started, with riot police descending on the scene and kettling demonstrators under bylaw P-6. According to CTV, nearly 300 demonstrators were handed fines of $638 for participating in the demonstration that was declared illegal merely minutes after its start.

“This is a paramilitary response to a completely legitimate anti-police demonstration,” community organizer Jaggi Singh told The Daily while observing the line of riot police. “There’s a pattern that the police have established with this particular demonstration on March 15 where they try to shut it down right away, they did last year and they’ve just done it right now.”

“Obviously the police will treat a demonstration that targets them directly differently than other demonstrations,” Singh added.

“They’re trying to establish a pattern where people are going to be be scared and stay away from these demonstrations. […] We have to show people that we’re not scared and that we’re going to continue to show up.”

A little after the protest’s 3 p.m. start outside of the Jean-Talon metro station, the march was declared illegal under bylaw P-6, which requires organizers to give the protest’s itinerary and route to police 24 hours in advance.

Riot police, including some mounted officers, from the Service de police de la Ville de Montréal (SPVM) and the Sûreté du Québec (SQ) pushed around 150 protesters onto Chateaubriand and Jean-Talon, where they were kettled for the duration of the protest.

“There [were] two people who had banners, they went into the street and said, ‘À qui la rue?’,” a protester who identified only as Cécile told The Daily, referring to a popular protest chant. “Then the cops just smashed [them], took the banners out, and pushed everybody, [on the] sidewalk and street, to Chateaubriand.”

A group of protesters quickly regrouped, and faced off against the riot police controlling access to the kettle. One protester seen confronting riot police was subsequently arrested and placed in a police cruiser.

The group of protesters was eventually dispersed by a line of riot police who charged at the crowd.

“This is a paramilitary response to a completely legitimate anti-police demonstration.”

Passengers inside Jean-Talon metro station were kept in the station by police during the protest, and an announcement from the Société de transport de Montréal (STM) blamed interrupted service on an “incident.”

Along with the hundreds kettled and fined, five people were also arrested at the march. Those in attendance pointed out to The Daily the unequal nature of the police intervention.

“The police […] intervene quickly, and I think that they’re pretty merciless,” said Vincent Roy, a protester who told The Daily that he was attending the march for the first time. “There are definitely more armed police officers, ready to attack, than there are protesters.”

Commenting on why many people don’t come to the protest, Roy said, “I think that most of us aren’t ready to get beaten with a nightstick, or get arrested, or receive an impossibly expensive ticket, for a cause that doesn’t concern us directly.”

“I think it is important for there to be a demonstration every year against police brutality, it’s a clearly established reality,” Singh said. “I hope this year is a tipping point where folks that are perhaps more mainstream, and not necessarily folks that will come out to a demo like this, will say that it’s totally inappropriate for these demonstrations to be shut down.”

“They’re trying to establish a pattern where people are going to be be scared and stay away from these demonstrations. […] We have to show people that we’re not scared and that we’re going to continue to show up.”

The protesters largely dispersed by 5 p.m., two hours after the beginning of the protest. The kettled protesters were processed and released by 6 p.m..

– With files from Carla Green