March ends in arrests and tickets 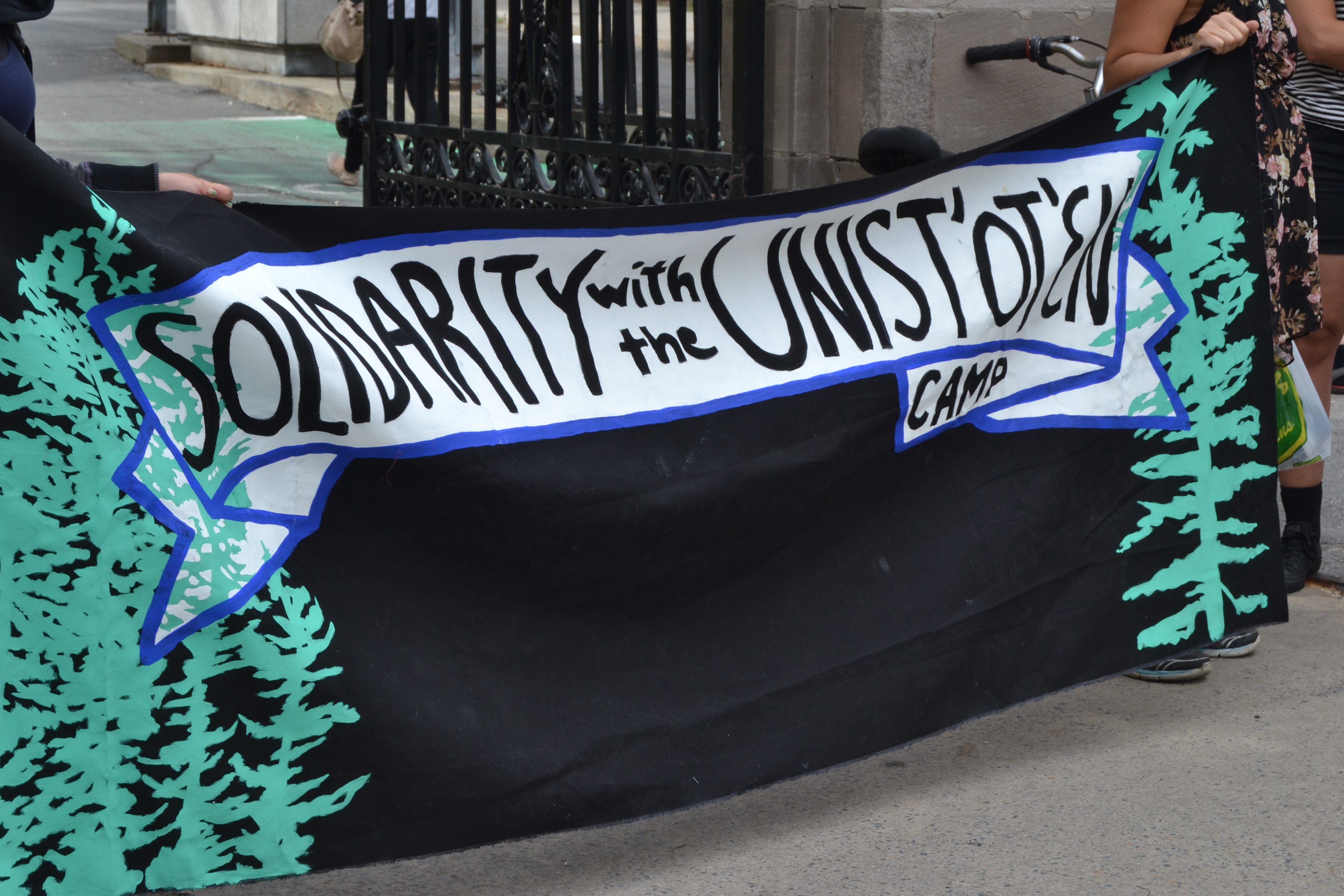 Around twenty protesters met in front of McGill’s Roddick Gates on July 24 to demonstrate support for the Unist’ot’en Camp in British Columbia and to protest the recent actions of the Royal Canadian Mounted Police (RCMP), which has increased its efforts to enter the camp and has, allegedly, threatened the camp’s volunteers.

The Unist’ot’en Camp is set in the unceded territories of the Wet’suwet’en First Nation, which are currently endangered by 11 different pipeline proposals, including Chevron’s Pacific Trails Pipeline project. For several years, the volunteers at the camp have been setting up checkpoints in the territory and determining whether or not visitors are allowed access.

Speaking to The Daily, one organizer, who wished to remain anonymous, explained that the Unist’ot’en and the volunteers at the camp have been practicing “free prior and informed consent protocols,” a method that involves asking potential visitors what they are planning to do within the territory.

“[The Unist’ot’en have] made it very clear that […] Chevron is not allowed in the territory and the RCMP, who is just acting to enforce this capitalist agenda, is not allowed on their territory either.”

In a pamphlet handed out to passers-by, the organizers explained that “the context of police brutality is one of maintenance and protection of the settler-colonial invasion.”

“We refuse to tolerate the police abuses of power and the day-to-day acts of police violence that allow for the continued colonization of Turtle Island [an Indigenous name for North America] and the environmental devastation of capitalist expansion,” the pamphlet concludes.

Police response to the protest march

At around 5:30 p.m. on Friday, the protesters started to show up at the designated meeting point, where ten Service de police de la ville de Montréal (SPVM) cars were already waiting. The protesters then began marching westward on Sherbrooke.

The procession turned left at Mansfield Street and then at Maisonneuve, continually marching westward. As they approached the corner of Maisonneuve and Stanley, one of the police cars overtook the procession by driving through the bike lane. The SPVM then proceeded to surround the protesters.

According to the anonymous organizer, six people were arrested and three people were ticketed “for demonstrating and exercising their free speech.” The SPVM, however, stated that one arrest had been made and eight tickets issued.

Among those ticketed was Link reporter Matt D’amours, whose alleged offence was “having occupied a road used as an alternate route for traffic diverted from a public highway by placing an obstacle so as to obstruct vehicular traffic on the road without authorization,” under article 500.1 of the Highway Safety Code.

“The police brutality that we witnessed today has become the norm in Montreal.”

“I do admit that I was on the street at certain points, because as a member of the press, I had to be as close to the story as possible to see what was happening,” D’amours told The Daily.

“What’s interesting, though – I did eventually make it to the sidewalk. The police had come near the curb in between the cement to get on the bike path […] and I was moving in that direction and was actually on the sidewalk, when a police officer came up to me and grabbed me by the arm, and asked me, first of all, to turn my phone off while I was live streaming,” he continued.

Speaking to the reaction of the SPVM to the protest, the anonymous organizer said, “The police brutality that we witnessed today has become the norm in Montreal. But also, police brutality has always been used against marginalized communities and it’s not that surprising that [police] would target a protest that’s in support of Indigenous peoples’ struggle, because all these [police forces], especially the RCMP, have been established to enforce the colonial state’s policies.”