Demonstration Against RBC Held at McGill 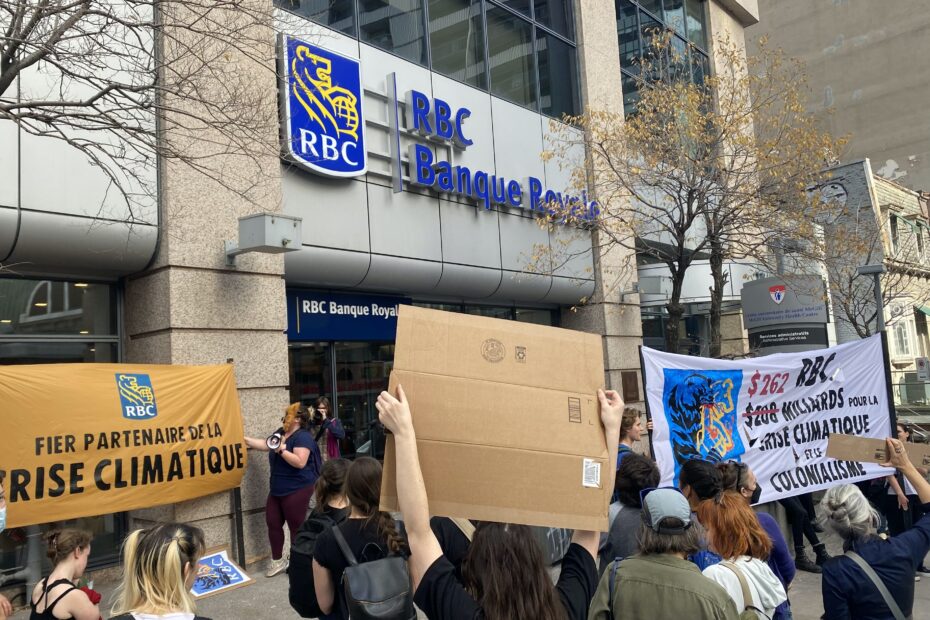 On Saturday, November 5, protestors gathered in front of the Royal Bank of Canada’s (RBC) “On Campus” branch at McGill to object to the bank’s investment in the Coastal Gaslink (CGL) pipeline. The group Decolonial Solidarity organized the protest in response to a call to action from the Gidimt’en Checkpoint in Wet’suwet’en territory, which stated that drilling for the pipeline was ready to begin under the Wedzin Kwa (Morice) river.

“Working together is the only way we stand a chance to force this incredibly powerful and influential bank to abandon short term profits and divest from the CGL pipeline,” said one organizer speaking to the crowd. “RBC is in violation of Indigenous rights. Wherever RBC bank is, it will hear from the allies of those who its investments hurt.”

According to this organizer, the CGL pipeline will impact Wet’suwet’en people’s access to fresh water and food sources. The finished pipeline will cross over 600 waterways in BC, and has already been flagged for multiple environmental violations, including possible disruptions to fish habitats and potentially damaging water quality non-compliances. The pipeline will also contribute to the global climate crisis: the speaker stated that the pipeline is projected to move up to five billion cubic feet of natural gas a day – the equivalent of 585 million pounds of CO2.

“Where you put your money actually has an impact,” said Seph, a masters student in biology at McGill who works with Divest McGill. He wants McGill students to be aware that the CGL pipeline funded by RBC runs through unceded Wet’suwet’en territory; “they never gave consent for that so this is an issue both of Indigenous sovereignty but also climate destruction.”

The organizer with Decolonial Solidarity cited the UN Declaration on the Rights of Indigenous Peoples Article 10, which states that “Indigenous peoples shall not be forcibly removed from their lands or territories. No relocation shall take place without the free, prior and informed consent of the Indigenous peoples concerned and after agreement on just and fair compensation and, where possible, with the option of return.” The BC government passed UNDRIP into law in 2019.

“There are RBC branches all over Canada and every time there’s a demo like this it makes their brand look worse and worse and they need to respond to their investors who care very much what they do with their money,” Sepi, a protestor standing with the crowd in front of the On Campus branch, told the Daily. “Even if RBC doesn’t care, investors care.”

There are RBC On Campus branches at both McGill and Concordia, and according to one organizer, the McGill student union and many faculty groups bank with them. RBC is also currently collaborating with McGill to offer a  personal finance class in Desautels, and has sponsored frosh for the Faculty of Arts and Science.

Una Sverko, a first year law student at McGill organizing with Decolonial Solidarity, wants to ask the McGill administration to divest from fossil fuels: “Divest has been saying that for over 10 years now, so it’s about time you listen[…]listen to your student body,” she said. She also asks that faculty groups currently banking with RBC look for an alternative bank or credit union.

Of the On Campus branch and the collaborative course, Sverko said: “it’s allowing RBC to actively try to filter McGill students into their talent pipeline and actively allowing RBC to kind-of poach us as their customers.”

After a few short speeches, organizers from Decolonial Solidarity led the group in chanting: “Our climate, we’ll fight for that, RBC no time for that” and “Pipeline spills, RBC kills.” The protestors then marched to the RBC On Campus branch at Concordia, continuing to chant. When the group arrived, organizers spoke again, offering actionable steps for those looking to continue to protest RBC’s involvement in the pipeline project.

“There is so much you can do, just yourself and one other friend, that is safe and that is beautiful, and that keeps bringing the message out” said Una. She suggested participants could sit in front of RBC branches, hand out flyers, set up information booths, or create sidewalk murals with chalk or washable paint. “We will share your stuff, it will spread, people do see the images of all of these actions, and it brings a lot of hope, so please do if you can.”

According to Una, there were similar protests on November 5 in at least 16 cities across six provinces, including Montreal, Victoriaville, and Valleyfield in Quebec. Despite this, Coastal Gaslink seems to be proceeding with construction. On Tuesday, November 8, security guards blocked Wet’suwet’en Hereditary Chief Na’moks from entering the Wedzin Kwa site to monitor the drilling. As of November 11, Decolonial Solidarity has not publicized any new information about upcoming actions in Montreal.