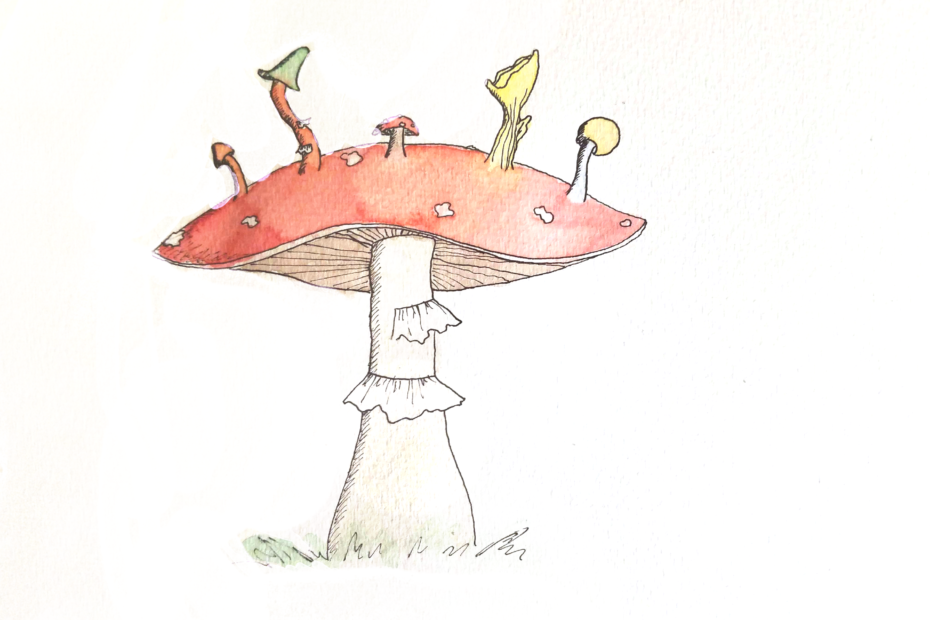 The Concordia Mycological Society (CMS) wrapped up its first student-led informational session on January 26, and it’s safe to say that more than a few people came away as newly minted mushroom-heads. The two-part series set out to “demystify fungi,” and although myths were dispelled, mushrooms remain as mystical as ever.

Mycological societies have been popping up all over in the last few years, with members going on foraging expeditions and sharing their passion. Part of the mushroom frenzy might be explained by how quickly the field is expanding after a long period of banned or under-funded research. As interest in mushrooms increases, events like the CMS informational sessions are determined to convert us from mycophobia to mycophilia.

Environmental Science student and presenter Francisca Spedding summed up her interest in mycology, the study of fungi: “When I was studying biology I just found out how wacky [fungi] are […] and how much potential they have.” With a shelf of plants in her zoom background basking in sun-lamps, she gave an overview of fungi, which only became classified differently from plants in the 1960s. In fact, genetic sequencing has revealed that animals are more closely related to fungi than to plants. Spedding explained how fungi can be “hard to nail down,” ranging from unicellular and invisible to the naked eye, to some of the largest living structures on earth.

What we often think of as mushrooms are really just the reproductive organs, generating spores so prolific and resilient that they can be found inside glaciers, deep sea vents, the stratosphere, and even brain channels. But the vast majority of a mushroom’s biomass is underground, in mycelium networks that can move information through an ecosystem so efficiently and expansively that they are now being mapped on a large scale. The symbiotic relationship between mycelium and the roots of plants, referred to as mycorrhiza, make up networks which are exceptional at stabilizing environments and transporting life-sustaining nutrients over vast distances. The way plants communicate through this multispecies network is still being explored. Eugenio Garza, a student specializing in cellular molecular biology, emphasized another way that fungi are instrumental to the survival of our ecosystems. Partially because they are the only major organism that can break down lignin, a component of all vascular plants, fungi are the primary decomposers of plant material on the planet. Digesting their nutrients externally, fungi help with the creation and maintenance of new soil. By offering this key process in the biogeochemical cycle, they recycle the planet’s limited resources.

Because they’re so diverse, fungi can interact with other species in unpredictable ways. In 2016, two species were discovered to be producing cathinone –  an amphetamine – and psilocybin – a hallucinogen – in cicadas,  sending the insects into a sex-fuelled frenzy. Cordyceps, also known as the zombie fungus, can be detected by ants, who escort any infected ant elsewhere, kill it, and then kill themselves to prevent the colony from being infected.

Mycophiles come from disciplines just as diverse as the fungi they study. Meryem Benallal, political science major and co-founder of CMS, explained how to recognize poisonous mushrooms to avoid mycetism (mushroom poisoning), of which there are around 150 cases in Canada each year. Mycetism has a long list of symptoms that can consist of anything from vomiting, diarrhea, stomach pain, hallucinations, speech impairment, and nausea, to symptoms as deadly as seizures, coma, destruction of muscle tissues, unquenchable thirst, or failure of vital organs. Although treatment has improved, there are still no proven antidotes for mycetism, which in some species can be brought on by a single cap. Despite the lack of funding to support these skills, Benallal noted that mushroom identification can be a lifelong pursuit.  Expert and amateur mycologists can draw upon a wealth of experience and information, much of which is drawn from Indigenous peoples and knowledge systems.

Humans have long used fungi for healing, such as in psychedelic-based therapies. Entheogenic mushrooms, discussed by speaker Phillipe Lavoie, are psychoactive mushrooms taken to produce a mystical or spiritual experience. Psilocybin, the most common entheogen, is found in at least 144 species of mushrooms. Psilocybin has been linked to neurogenesis and an increase in neuronal connections. Attendee Aaron Moore used an analogy of sledding: it’s easy to fall back into grooves you’ve already carved in the snow, but psilocybin can provide a fresh layer of powder. This process may allow new habits and behavioral patterns to form.

Some of the first depictions of mushrooms may refer to their entheogenic capabilities.  Cave paintings in modern-day Algeria, believed to be 7 to 9 thousand years old, show a connection of mushrooms to the head – theorized to represent the perceptual shift they effected on people. In the Americas, many Indigenous populations integrated psilocybin mushrooms into their culture. One Nahuatl word for entheogenic mushrooms is teonanácatl, literally “god fungus,” referring to their ability to establish a link between the divine and the physical. Following the Spanish invasion of the Triple Alliance and surrounding nations in 1519, firsthand reports from European merchants of entheogenic mushroom use preceded Christian condemnation and punishment of the practice, believing the visions brought on to be demonic. This prohibition pushed psychedelic ceremonies underground, and the secret was so closely guarded that among non-Indigenous people in early 20th century Europe and North America it was believed that reports of Indigenous entheogenic mushroom use were mere superstition. It wasn’t until 1955 that ethnomycologists Valentina Pavlovna and R. Gordon Wasson traveled to Huautla de Jiménez, Oaxaca, to attempt to understand the spiritual and medical traditions surrounding mushrooms. A pediatrician, Valentina approached the traditions from a medical point of view and posited that if the active agent in these mushrooms could be isolated and a supply assured, it could be a vital tool in the study of psychic processes, as well as help treat drug addiction, mental illness, and terminal diseases. The two experienced a traditional ceremony organized by María Sabina, a Mazatec Curandera, or Healer, who used psilocybin mushrooms for a medicinal and spiritual experience of purification and the divine called Velada. María’s natural healing ceremonies were vital to her community. With a boom in psychedelics in the 1960s, Huautla de Jiménez received so much tourism that it raised police suspicions that María Sabina was a drug dealer. The high traffic of foreign tourists threatened the Mazatec community, and to Sabina, took the sacredness out of the medicine. She died in extreme poverty, ostracized and largely unrecognized for her contribution to psychedelic history. It was later revealed that Wasson’s 1956 expedition had been funded by the CIA’s mind control project MK Ultra. In 1971, then-president Richard Nixon signed the controlled substances act into law, branding LSD and psilocybin as dangerous, highly addictive, and having no medical benefits, contradicting all previous studies on the substances. As Canada and the UN followed with similarly draconian policies, the psychedelic era came to an end.

Today, entheogens are being researched for use in treating PTSD, depression, substance abuse, end-of-life anxiety, OCD, eating disorders, and Alzheimer’s disease. Special access programs allow healthcare professionals to request certain drugs that are not usually prescribable if conventional treatment is not a suitable option.

Following an ancient, worldwide tradition of using mushrooms in healing, a wide variety of fungi outside psilocybin mushrooms are being researched for medical use. Hericenones and Erinacines, from Lion’s Mane mushrooms, induce increases of up to 60.6 per cent nerve growth factor synthesis in nerve cells, which are essential for neuron growth and differentiation. Cordyceps, long used in Ayurvedic medicine, can be used in treating HIV, due to cordycepin’s immune promoting and anti-inflammatory effects, and in 2017 a study found it could also fight leukemia cells. We could even use fungi to protect ourselves from radiation – Cryptococcus neoformans was discovered in 1991 to be uniquely thriving in radioactive conditions, unlike other organisms living in spite of them. As more species are discovered and more genomes sequenced, there is incredible potential for new molecules. Furthermore, metagenomic techniques make it possible to sample genetic material directly from the environment, disrupting fungi as little as possible.

The world of mushrooms is an expansive and rewarding one. You can become a part of it by supporting the decriminalization of psilocybin and sensible drug policy in general. For those interested in ending the stigmatization of the use of psychedelics, the Canadian Psychedelic Association conducts research on psychotherapy and seeks to “connect and serve all facets of the psychedelic community and movement in Canada.” Canadian Students for Sensible Drug Policy “advocate for the decriminalization of drug use and believe that drug use should be an issue of public health, not criminal justice.”

For non-Indigenous readers, we can also learn more by respecting Indigenous knowledge systems, and by recognizing traditional medicine and First Nations titles to ecosystem management and regulation.

If you want to get involved yourself, find your nearest mycological society, and when conditions permit, you can meet and share a drink, some knowledge, and head out to forage together. CMS, from whom all of this information was adapted, aims to “contribute to a greener future” in doing so. By destigmatizing the use of psilocybin and promoting education about the magical world of mushrooms, we can go from mycophobia to mycotopia.