How Watching Abed Nadir Made Me Feel Seen

On Community’s ground-breaking representation of autism 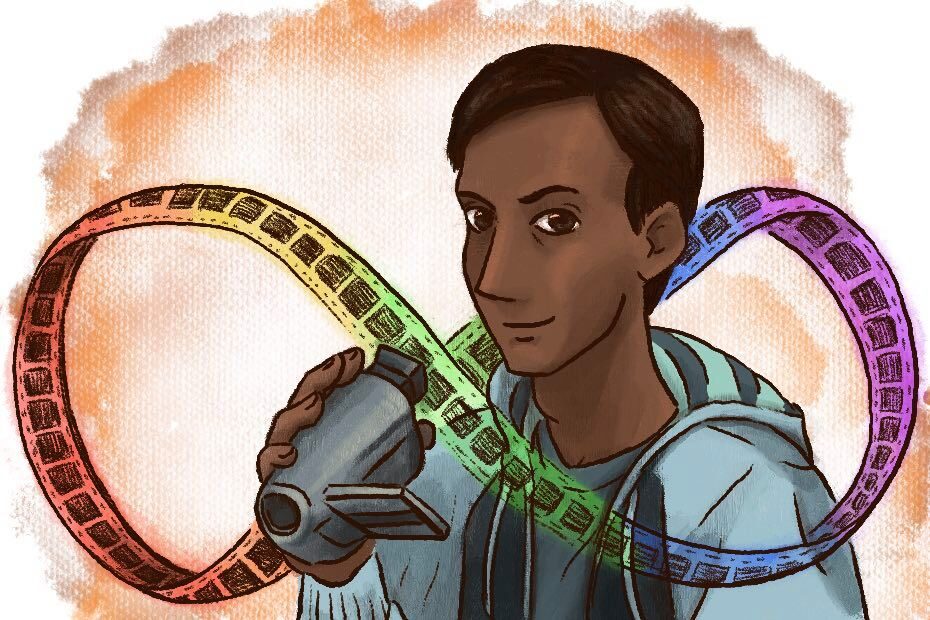 I was diagnosed with autism at age 20 – late, all things considered, but not uncommon for people who were assigned female at birth. Being diagnosed felt like letting out a huge sigh of relief – I finally understood who I was, and I wanted to learn everything about autism. I started looking everywhere for characters who were like me, and that’s how I found Community.

I immediately connected with Abed. This was a character that got me – I watched him dump his life story on Jeff before he even introduced himself in the pilot episode, and it was like seeing myself on television in the best and most confusing way.

Though Abed is never explicitly labelled as autistic, the series often hints at this aspect of his identity. In the pilot, for instance, Jeff tells Abed, out of anger: “Yeah, well you have Asperger’s.” (Asperger’s is an outdated term for autism spectrum disorder without language delay). In the season 3 episode “Regional Holiday Music,” Abed says “On the spectrum? None of your business” during his “Christmas Infiltration” rap with Troy. Abed’s autism is generally accepted by Community’s fanbase; Dan Harmon even discovered that he was autistic himself while writing Abed’s character.

Just a note here: autism is a spectrum made up of many traits and characteristics that each autistic person embodies to different extents – here’s a pretty cool comic that explains this. Abed may be the perfect representation of autism for me, but that doesn’t mean he fulfils that role for every autistic person.

Abed has a special interest in TV and film, and he attempts to understand the world through pop culture references. This resonates with me deeply as a person who understands others through the media I consume; I adopt much of the way I talk from my favourite books, TV shows, and YouTube videos. Abed speaks in movie quotes, uses movie marathons to connect with friends, and imagines himself as various film characters to problem-solve.

Unlike in many depictions of autistic people, Abed’s friends accept and encourage his interests, instead of making fun of them. In season 1, Britta pays for Abed’s film class when his father refuses to, allowing him to pursue his aspiration of being a filmmaker. In the season 2 episode “Critical Film Studies,” Abed’s friends throw him a Pulp Fiction-themed birthday party. Abed even meets his girlfriend, Rachel, when she picks up on the rom-com-inspired “Two-Timer Date” scenario that Abed is pulling while she is working the coatroom at their school dance.

Despite Abed’s in-depth knowledge of pop culture, the show doesn’t portray him as a savant – an autistic person who has “extraordinary” abilities in a specific category, a trope that is present in most portrayals of autism in the media, but that represents less than ten per cent of the autistic population. Abed loves making films, but he also struggles with his craft. He can build an impressively large blanket fort and memorize countless movie references, but he doesn’t know how to pay parking tickets, can’t tell his left from right without mouthing the Pledge of Allegiance, and can’t read an analog clock. He is multifaceted and imperfect, considered as neither a charity case, nor a superhuman.

What sets Abed apart for me is the fact that his loved ones are patient with him when he misinterprets social situations and struggles to connect with others, while simultaneously holding him accountable when he messes up. When Abed fights with his girlfriend because he lies to her about wanting her to move in, she expresses her disappointment in him, but remains understanding of his difficulties with relationships. Abed’s friends give him pointers on sarcasm and teach him how to understand certain social cues, but they don’t excuse his manipulative behaviour as him “not knowing better.”

While I love this character in so many ways, I am also upset by the show’s reluctance to confirm his diagnosis. In a media landscape with so few autistic characters, especially autistic characters of colour, Abed would have been meaningful representation. By skirting around his diagnosis, the writers seem to communicate that autism is a “bad thing,” rather than simply a neurotype that differs from the dominant one. Television is a space where autism can be spoken about openly, which makes it a tool to decrease the stigma around being autistic.

Nearly six years after the end of Community, I struggle to find an autistic character who is as accurately depicted, well-rounded, and as fun as Abed. As Autism Acceptance Month begins, it’s important to uplift the work of autistic individuals and advocate for meaningful representation in the media. Series like Everything’s Gonna Be Okay (in which autistic actress Kayla Cromer plays an autistic girl named Matilda) and films like A. S.imple D.ate (written by and starring autistic actress Rebecca Faith Quinn) are essential media.

Seeing Abed Nadir on Community was a genuinely life-changing experience for me. For the first time, I felt truly seen by a character, and we can infer from Abed’s massive Twitter fanbase that many other people relate to him as well. Abed remains one of very few, well-written, autistic characters on television, but he can’t be the sole representation of autistic young adults, particularly when the traits and experiences of those on the spectrum vary so widely. Autistic people deserve meaningful representation that reflects the diversity of our lived experiences.