In Support of Status for All

March demanding migrant rights and protections announced for this summer 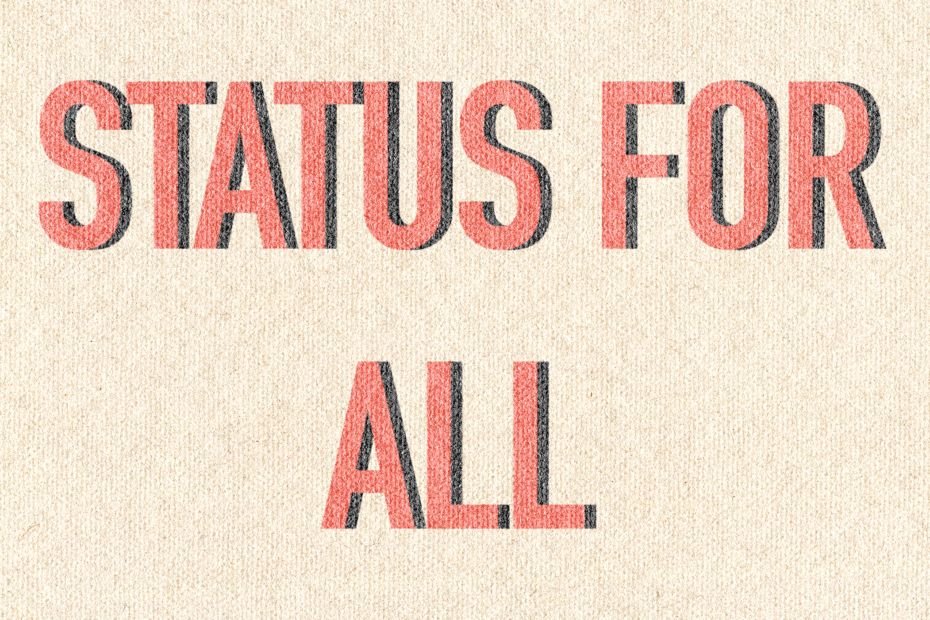 On March 27, 2021, migrant advocacy and allied groups gathered outside of the Federal Government Offices in Montreal to announce a march taking place this summer between July 18 and July 25 from Montreal to Ottawa. The march is a part of a movement that calls “for an ongoing, comprehensive regularization programme for all migrants with a precarious status.”

Regularization here refers to the creation of programs that assist migrants in applying for permanent residency. Although there are a variety of ways to approach regularization, migrant justice organization No One is Illegal calls for a regularization program that provides “immediate access to unrestricted and unconditional permanent resident or landed immigrant status in Canada.” The grassroots organization proposes a free application process that does not prioritize arbitrary requirements, such as the number of years spent in the country. This regularization program would also allow for the option to apply anonymously, so that migrants without residential status would not be criminalized or deported during the application process. Migrants who do hold a status, such as a temporary work permit, would also be able to apply.

Besides advocating for permanent status, the work of these groups seeks to address how the pandemic exacerbates precarious conditions many migrant individuals experience as a result of their residency status. During Saturday’s announcement of the march, representatives from the FFQ criticized the Canadian government, explaining that migrants must deal with “the constant fear of deportation” while being exploited by systems that capitalize off their labour. Samira Jasmin from Solidarity Across Borders agreed, asserting that “[migrant workers are] on the front line of danger, but there is no one who recognizes their efforts.”

Many sectors of the workforce rely heavily on migrant labour. Despite benefiting from this labour, the Canadian government continues to make the process of achieving residential status difficult and unjust for migrant workers. Everyone has a right to healthcare, financial security, and a place to live, but migrants in Canada are denied these despite the government’s reliance on migrants to bolster their economic interests – this is a clear violation of human rights.

While the federal government announced that it will grant exceptions to front-line healthcare workers who are asylum claimants, this new pathway to permanent residency still comes with strict requirements. These include needing to “have claimed asylum before March 13 2020,” meeting “existing admissibility requirements [regarding] criminality, security and health,” and having “6 months of experience in the designated occupation.” Migrants should not have to put themselves at risk in order to survive. Furthermore, all migrant workers deserve security regardless of which sector they work in. Fair and transparent regularization programs would ensure the accessibility of pathways to residency regardless of status or employment.

While migrant workers have been exploited long before the pandemic, it is important to note that many migrants were not allowed to apply for CERB, denying them crucial financial support throughout the intermittent provincial lockdowns. “By excluding undocumented people and many migrants who don’t have social insurance numbers, the CERB redraws notions of “‘essential work’ along nationalist lines.” Additionally, as stated by the World Health Organization (WHO), “migrants and refugees are disproportionately vulnerable to exclusion, stigma and discrimination, particularly when undocumented.” These vulnerabilities include access to healthcare, which is essential even without a pandemic. This lack of accessibility is concerning as migrant workers are more susceptible to illness, especially considering the overcrowded and unsanitary conditions of detention centres, “overcrowded camps, settlements, makeshift shelters or reception centres.”

Migrants deserve access to the same rights and protections as those with citizenship. These protections include access to healthcare, affordable housing, and safe working/living conditions. Furthermore, the Canadian government needs to prioritize migrant people by granting them status the same way they have prioritized labour programs that exploit migrant labourers. It must also be acknowledged that “Canada” is a settler-colonial state that upholds arbitrary notions of citizenship and belonging while continuing to perpetrate violence against Indigenous peoples.

To support migrant workers, sign the Migrant Rights Network Petition, which calls for “a single-tier immigration system, where everyone in Canada has the same rights.” If you have the means , consider donating to Justice for Migrant Workers and Solidarity Across Borders (SAB). For more information, you can check out the IMD Digital Day of Action Toolkit, which contains educational resources and ways to contact local representatives, including email templates. Lastly, if you require legal assistance related to migrant status and working in Canada, consider consulting the following resources:

We must continue to advocate for concrete change and improvement of material conditions for migrant workers, in part by holding the federal government accountable. It is imperative that those in positions of privilege show up to support and uplift migrant voices at this march.