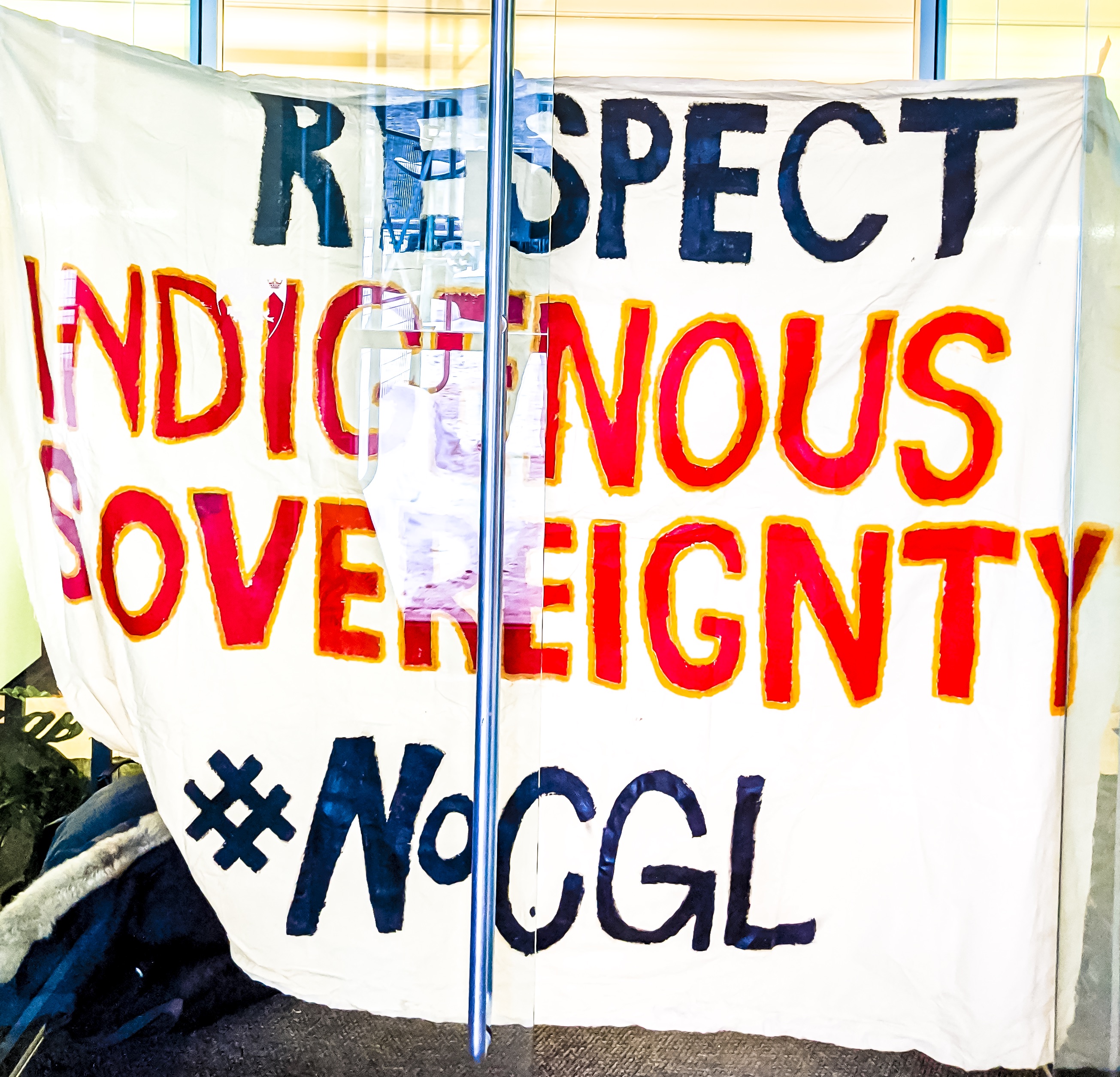 At 8:30 a.m. on Tuesday, February 18, students affiliated with Divest McGill and Greenpeace McGill entered the James Administration building on McGill’s downtown campus, blocking the entrances and preventing any further staff or students from entering the building. Administrators and building staff who were already there were free to leave at any point during the day. Within a few minutes, signs were posted on all exits that read “James Administration closed for the day until fossil fuel divestment. Thank you for understanding :)” Within 10-15 minutes, the building was locked down at all access points including exterior entrances and annexes.

According to members of Divest McGill, the purpose of the blockade was to prevent the Committee to Advise on Matters of Social Responsibility (CAMSR) from meeting in the James Administration building. The scheduled meeting was planned to “develop an implementation plan to operationalize the approved recommendations.” The recommendations in question come from CAMSR’s December 3, 2019 recommendation to the Board of Governors, advising decarbonization – not divestment – from the University’s endowment. Although CAMSR was not able to convene in the James Administration building, the meeting occurred as scheduled – albeit after a short delay – in the Macdonald Engineering building.

Students participating in the blockade presented flyers to all staff remaining in the building – including Deputy Provost (Student Life and Learning) Fabrice Labeau and Vice Principal (Administration and Finance) Yves Beauchamp – and posted them on all exterior doors. The notice outlined Divest’s demands, explaining that “Divest McGill will not allow the university to continue its business-as-usual operations while the university funds companies causing immense human and environmental harm […] Given the current violence towards Indigenous peoples and the urgency of the climate crisis, disruption to the university’s operations is necessary.”

Divest’s demands refer to the University’s nearly $6 million investment in TC Energy, the company responsible for attempting to build a pipeline through the Hereditary land of the Wet’suwet’en Nation in British Columbia. An injunction was approved on December 31, 2019 by the Supreme Court of British Columbia, opposing an eviction notice posted to Coastal GasLink employees by Hereditary Chiefs of the five Wet’suwet’en clans. Since the injunction ruling, the RCMP have been illegally invading the Unist’ot’en and Gidimt’en camps, violently arresting Indigenous land defenders and allies, as well as enforcing a media exclusion zone. Divest affirmed that their actions are allied with demonstrations across the country, stating to the Daily that “We are responding to the call for solidarity from Wet’suwet’en by demanding immediate divestment from Coastal GasLink.” McGill’s investment in TC Energy makes up only $6 million of the more than $40 million that was invested in other oil and gas companies as of March 31, 2019.

At approximately 10:00 a.m., McGill security arrived and posted themselves outside each exit. Divest explained to the Daily that “once we communicated the main intention of this blockade [through a security liaison], which is to prevent access, [security] blocked off from outside of the doors.” Press – including student publications – were not allowed in, and the CBC was also blocked from entering.

In the early afternoon, McGill security inquired about the student’s plans in the event of an emergency evacuation, concerns also voiced by Labeau and Beauchamp earlier in the day. Students explained that people were allowed to leave the building, but no one could enter. Staff who remained in the building began leaving at approximately 2:00 p.m. At this time, security was seen near an alarm panel, causing concern among students that McGill Security would purposefully trigger the emergency alarm system to force an evacuation.

The Daily eventually got past security and were able to enter the building. When asked about the significance of the event, blockaders explained that “It’s just not enough to prioritize individual change. We have to target people who are making the major decisions.” According to students at the second checkpoint, despite frustration from many of the building’s staff, “there were also a lot of people who were extremely supportive. For example, one of the employees here was very kind to us, offered to make us hot chocolate, [and] was checking in on us.”

The blockade is part of a history of protests by Divest McGill. On the importance of these protests, Divest explained that “blockades and actions like this are a way to have our voice heard and demand action on issues of injustice. Like the Coastal GasLink pipeline. And we encourage students to get involved with Divest McGill active projects on campus which are taking away the social licence of destructive companies.”

The blockade ended at 4:00 pm; students inside left of their own volition. At the time of publishing, McGill administration and CAMSR have yet to comment on the demonstration. Though the demands of the blockade were to block off the building until McGill agreed to divest, the demonstration ended with the work day, and further steps to meet these demands are unclear.