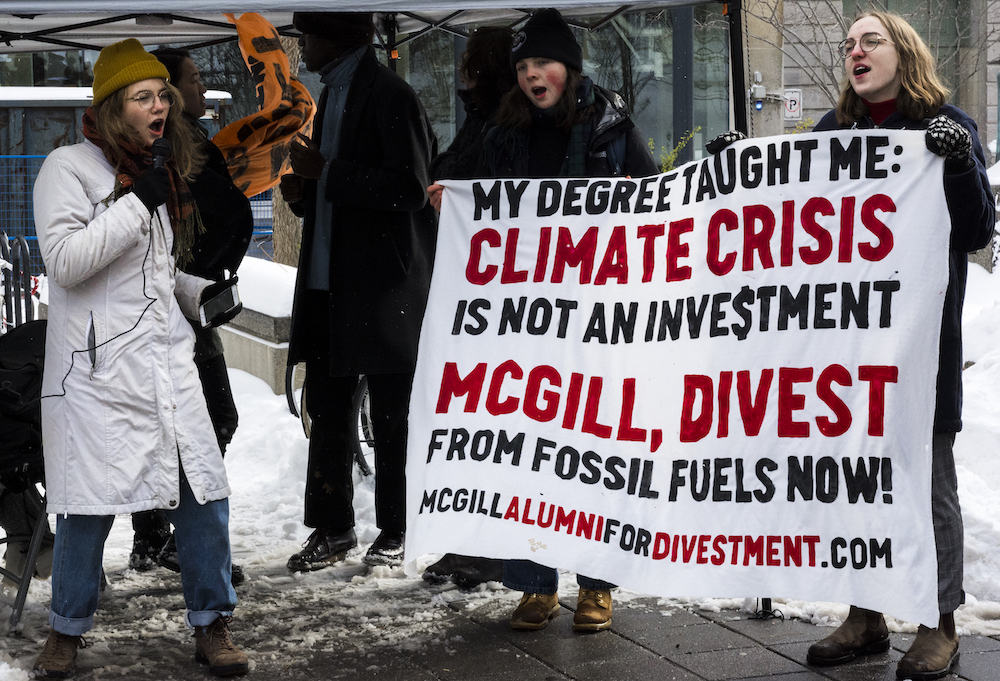 On December 3, the Committee to Advise on Matters of Social Responsibility (CAMSR) released their report to McGill’s Board of Governors (BoG), “[concluding] that absolute divestment from the fossil fuel sector is not advisable” and issuing recommendations to “reduce the overall carbon footprint of the University’s investments.”

This is the third time that CAMSR has debated fossil fuel divestment. They first discussed the matter in 2013, after Divest McGill submitted a petition calling on the University to do so. However, the committee rejected the petition on the claim that “Divest McGill had failed to demonstrate that social injury (as defined in the terms of reference) had occurred due to the actions of a company involved in either oil sands or fossil fuels.” In 2016, CAMSR debated the matter again. As former BoG and CAMSR chair Stuart “Kip” Cobbett stated of the decision at the time, “We found that although there was certain injury caused, that it did not meet the test of ‘social injury’ as defined in the terms of reference of CAMSR.” He also stated that CAMSR viewed divestment as “not the most appropriate or effective way to improve the environmental situation,” or “to reduce the emissions of greenhouse gases.”

CAMSR’s returned to the topic following the McGill Senate’s resolution on divestment, which passed in 2018, calling for the BoG to “divest the endowment from all companies whose primary business is the extraction, distribution, and/or sale of fossil fuels; and from all mutual funds that invest in such companies.”

In the 45 page report, CAMSR lays out eight recommendations for the Investment Committee, including “decarbonization of McGill’s endowment portfolio”, investment in “low-carbon funds” and “fossil-fuel-free funds”, and “annual reporting on socially responsible [investments]” (SRIs). Compared to its total endowment of $1.6 B as of 2018, McGill has established a $5 million Fossil Fuel Free Investment Fund (FFF). In the total endowment, $105.1 M (6.4 per cent) is invested in the energy sector (other than coal and oil sands), $31.0 M (1.9 per cent) with direct exposure to coal and oil sands, and $6.4 M (0.4 per cent) invested with indirect exposure to coal and oil sands. The report argues that “For a Canadian investor to divest entirely from all fossil fuel investments would entail a loss of portfolio diversification and possible over-concentration in other sectors in the Canadian equity asset class, which would affect the risk/return profile of the total portfolio.”

The University’s news release maintains the CAMSR report “[supports] the continued evolution of the University’s investment portfolio towards a more sustainable and less carbon-intensive investment,” but does not mention divestment – partially or in full – from companies outlined in Senate’s resolution.

Despite other schools in the U15 Group of Canadian Research Universities, such as Concordia and the University of British Columbia, having already announced partial or full divestment, CAMSR recommends the BoD implement what they deem “Institutional Leadership”, and take on a leadership role in the policies and practices regarding socially responsible investing. How exactly they plan to do so, however, is unclear.

Student groups on campus – including Divest McGill, C-JAM, and Greenpeace McGill – have been advocating for divestment, both through demonstrations and by circulating a petition signed by students, alumni, faculty, staff, and donors, that pledges no donations until divestment happens. SSMU also passed a motion earlier this semester, establishing a policy that will not consider “Referendum questions for new Ancillary Fees, increases to existing Ancillary Fees, or any other new fees or increases to existing fees that McGill University wishes the Society to send to Referendum for approval,” until McGill chooses to divest.

At its meeting on December 5, the BoG will have the opportunity to approve or reject the recommendations. If they are approved, CAMSR will develop specific guidelines to be presented to the BoD by April 2020, including timelines and targets for decarbonising McGill’s investment framework.

Since the report’s release, students, climate activists, and SSMU senators have spoken out against the recommendations on Twitter and Facebook stating that “this is not divestment” as well as accusing the McGill administration of greenwashing.

Following the report’s release, Divest McGill issued a press release condemning CAMSR’s decision as “irresponsible,” and refusing to accept the University’s greenwashing. In the release, Divest mentioned the role that universities such as McGill play in influencing public policy. “Unlike divestment, today’s announcement fails to send a signal to policy makers that they should no longer support that industry through subsidies and loose regulations.”

Citing CAMSR’s “unreliable” procedures – the committee itself wrote that “methodologies for measuring carbon intensity are still relatively new and imperfect” and that the metrics used in their evaluation were “not precise” – as well as the conflicts of interest within the committee’s makeup (Cynthia Price Verreault, the chair of CAMSR, was a Petro Canada employee for 18 years), Divest maintains that they will continue their action against McGill’s investment decisions. Dissatisfied with what they deem a “weak proposal”, one member of Divest, Talia Martz-Oberlander, characterized the report as a “smoke screen for McGill’s ongoing complicity with the fossil fuel industry.”

This is a developing story. The McGill Daily will provide updates as information is released.