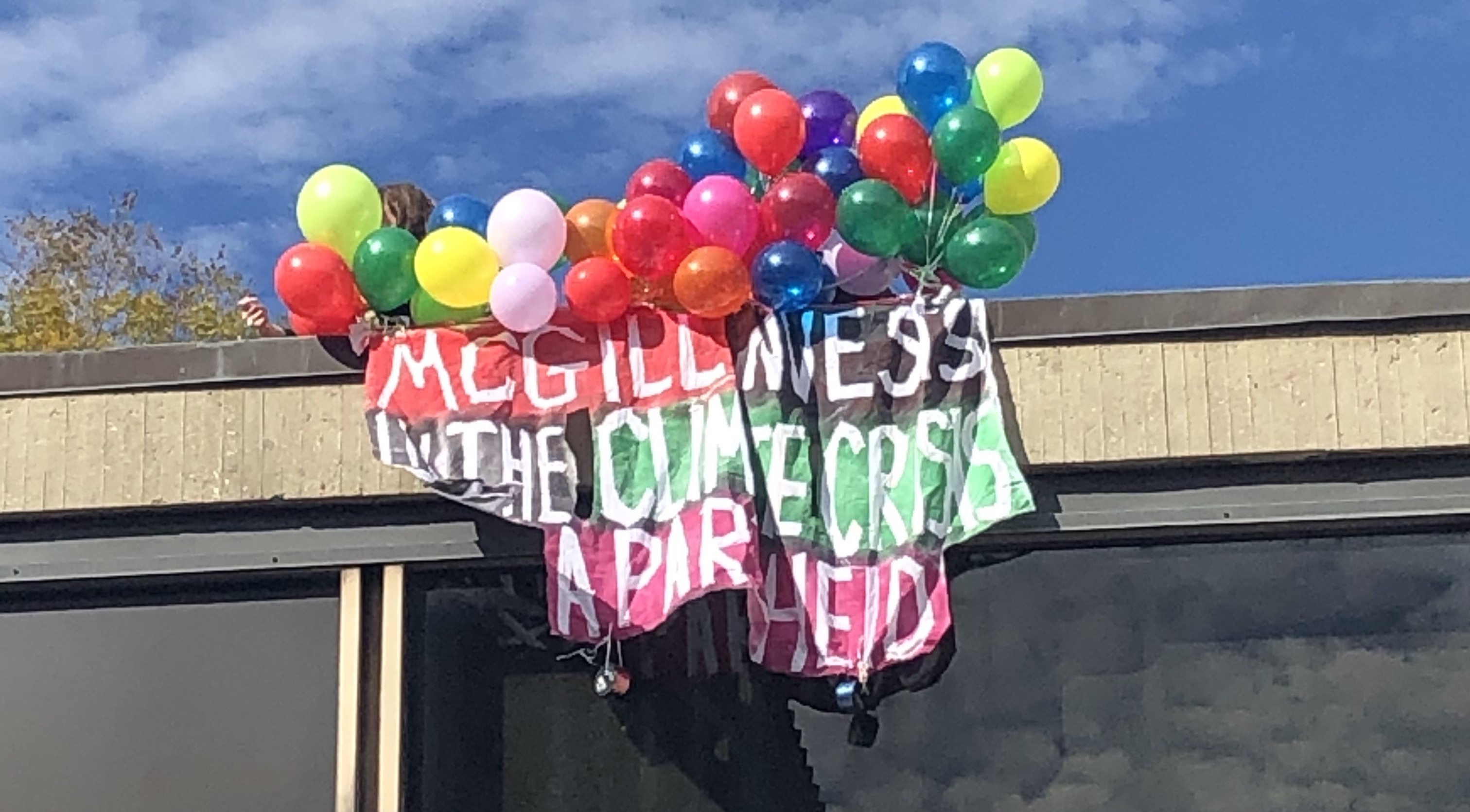 As approximately 7,000 prospective students and their parents arrived on campus for McGill’s Open House, a banner was dropped from the Leacock roof at 11:52 a.m., on October 20. Held in place by dozens of ballons, the banner read, “MCGILL INVESTS IN THE CLIMATE CRISIS + APARTHEID,” protesting McGill’s complicity in the climate crisis. Though the banner blew back onto the roof soon after it was dropped, it was readjusted later in the day, and remained on display until dark. It is unclear when the banner was finally taken down by security – a stark contrast to the quick removal of the “CHANGE THE NAME” banner dropped earlier this year. 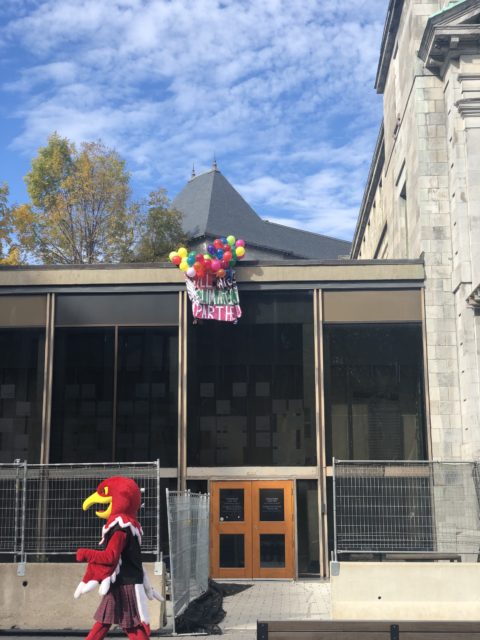 “As a historically colonial institution, founded on slave trade money, you would think that McGill would make a greater effort to disentangle itself from being complicit in further infringements of both social and climate justice.” –Speech given by coalition of student groups

Later that day, beginning at 1:00 p.m., a coalition of student groups gathered in front of the Arts Building, surrounding the site of James McGill’s reinterment. The coalition, which included members of the BSN, ISA, SPHR and was organized by C-JAM, held hands and circled the monument, displaying a banner reading “Here Lies James McGill, A Racist Slaveowner.” As prospective students passed the demonstration, they continuously repeated a speech speaking to the University’s “complicity in global conflicts for profit,” highlighting their investments in militarized weapons and real estate in occupied Palestine, as well as in the oil, gas, mining, and extraction industries. Interspersed between the speeches were chants of “divest now,” “free Palestine,” and “that’s bullshit, get off it, this land is not for profit.’’ 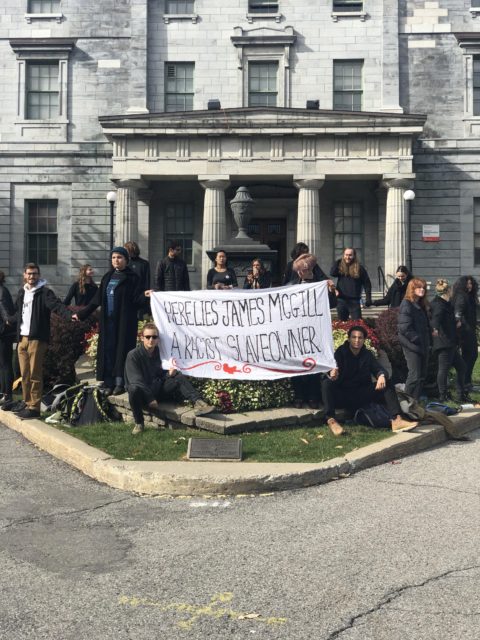 “As prospective students, you have a right to know how McGill spends your tuition money. McGill claims to be working towards sustainability but is funding climate destruction, they claim neutrality while being complicit in conflicts around the world.” –Speech given by coalition of student groups

According to student security facilitators Meg and Lucy, a member of McGill security was present for the entirety of the demonstration, but did not approach the students. The Event Coordinator for McGill’s Open House approached and questioned the students, inquiring about the motivations behind the demonstration and why they were protesting instead of “engaging directly with the administration.”

“McGill directly finances the exploitation of natural resources and the ongoing climate crisis, and maintains complicity in global conflicts for profit.” –Speech given by coalition of student groups

The weekend’s demonstrations were followed by a chalk and paint campaign run by McGill’s chapter of Greenpeace, covering the steps in front of the James Administration Building early on the morning of October 21. According to a press release by the chapter, the campaign was to “raise awareness on the intersectionality of the climate crisis,” timed to “greet the Committee to Advise on Matters of Social Responsibility (CAMSR) at their meeting on the Senate Resolution for the Divestment from Fossil Fuels.”

Students who wish to learn more about where their tuition money is spent, and how McGill is implicated by its investments can visit mcgillinvests.in.