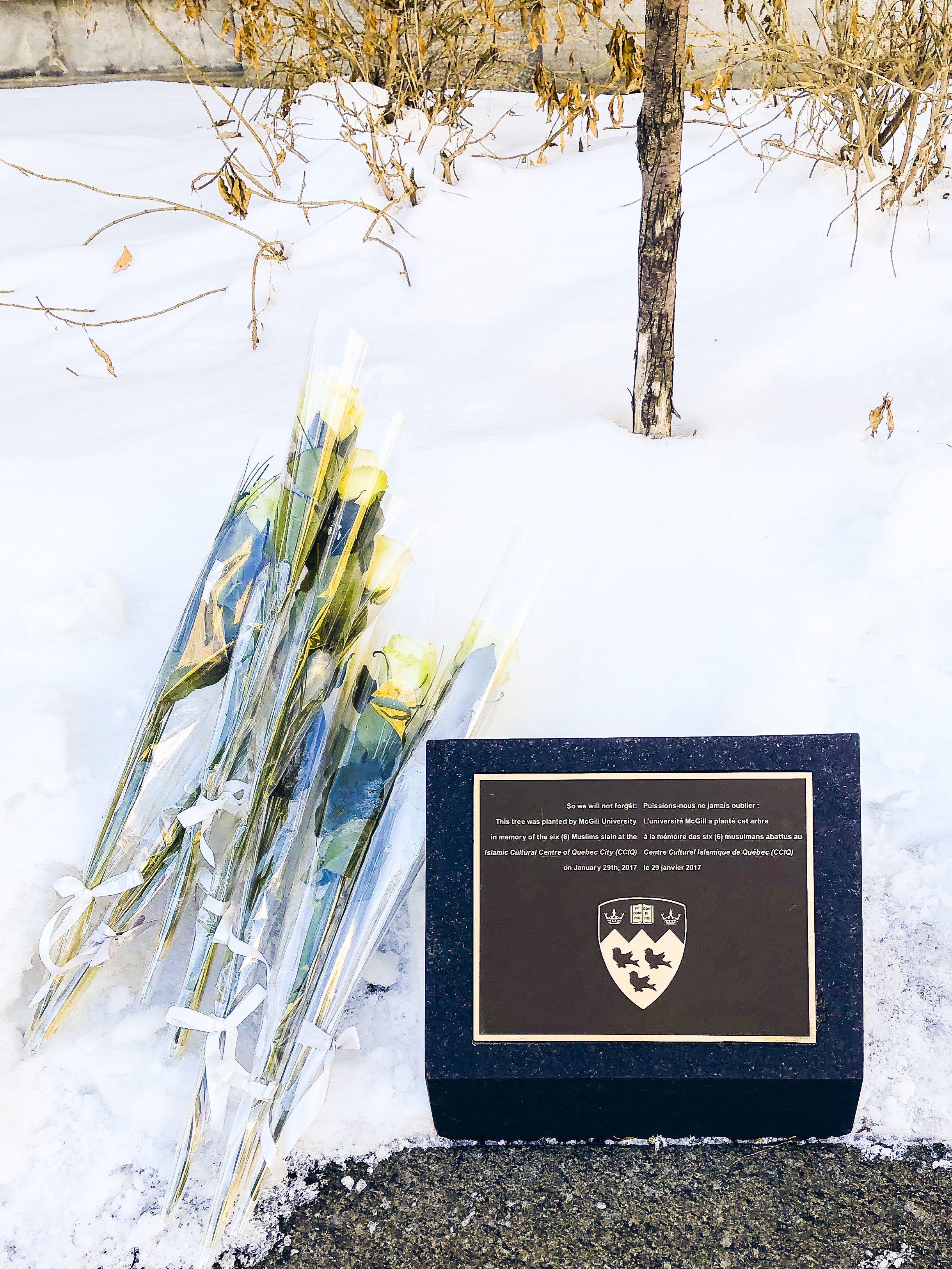 A small group of McGill students and Montreal community members gathered in the MacDonald Engineering Building mezzanine to honour the six victims of the Quebec City massacre on January 29, 2020 – the third anniversary of the attack.

On the same date in 2017, a shooter opened fire in the Islamic Cultural Centre of Quebec City mosque, shortly after evening prayer. Azzeddine Soufiane, Abdelkrim Hassane, Mamadou Tanou Barry, Ibrahima Barry, Aboubaker Thabti, and Khaled Belkacemi were killed, and 19 others were injured, including Aymen Derbali, who was paralyzed by the attack.

The commemoration was held in partnership with the second annual Muslim Awareness Week (MAW), which takes place in Quebec from January 25–31 each year. Ehab Lotayef, a member of McGill’s Board of Governors and coordinator of the MAW organizing committee, described the week as “an initiative by the Muslim community to try to go beyond just compassion and sympathy after what happened in 2017, and to take that to the level of trying to build bridges and connections.”

Provost and Vice-Principal (Academic) Christopher Manfredi and Caroline Savic, a representative of the Quebec National Assembly for Westmount-Saint-Louis, spoke on behalf of the McGill and Montreal communities, respectively. The Provost led a moment of silence.

Hamza Lahmimsi, president of the Muslim Student Association, spoke on the lasting effects this act of terror. “It is important to remember that no such tragedy occurs in a vacuum,” he stated. “Women were left widowed; children, fatherless. A whole community was wounded by the loss of their beloved friend. All Muslims were shaking at the realization that it could have been them in that mosque. How can a community be at peace when the place that gives them the most peace is no longer safe to enter?”

Professor Khalid Medani from the Institute of Islamic Studies emphasized the importance of accurate Muslim representation in the media to prevent the perpetuation of ignorance and prejudice. “We, of course, represent a diversity of different nationalities, points of view, ethnicities, and that is something that, surprisingly, is not always projected sufficiently in the media,” Medani told attendees. “We really want to encourage the media also to represent Muslims in a realistic way – that has such an important impact on how people percieve Islam in general, and Muslim-Canadians in particular.”

The event finished with a walk to the tree planted on campus in memoriam of the mass shooting. For each name read of the victims who lost their lives, as well as Aymen Derbali, who has been permanently paralyzed, an attendee placed a white rose under the tree. This portion of the event also provided time for reflection and prayer in front of the memorial.