One year later, few preventative measures have been taken 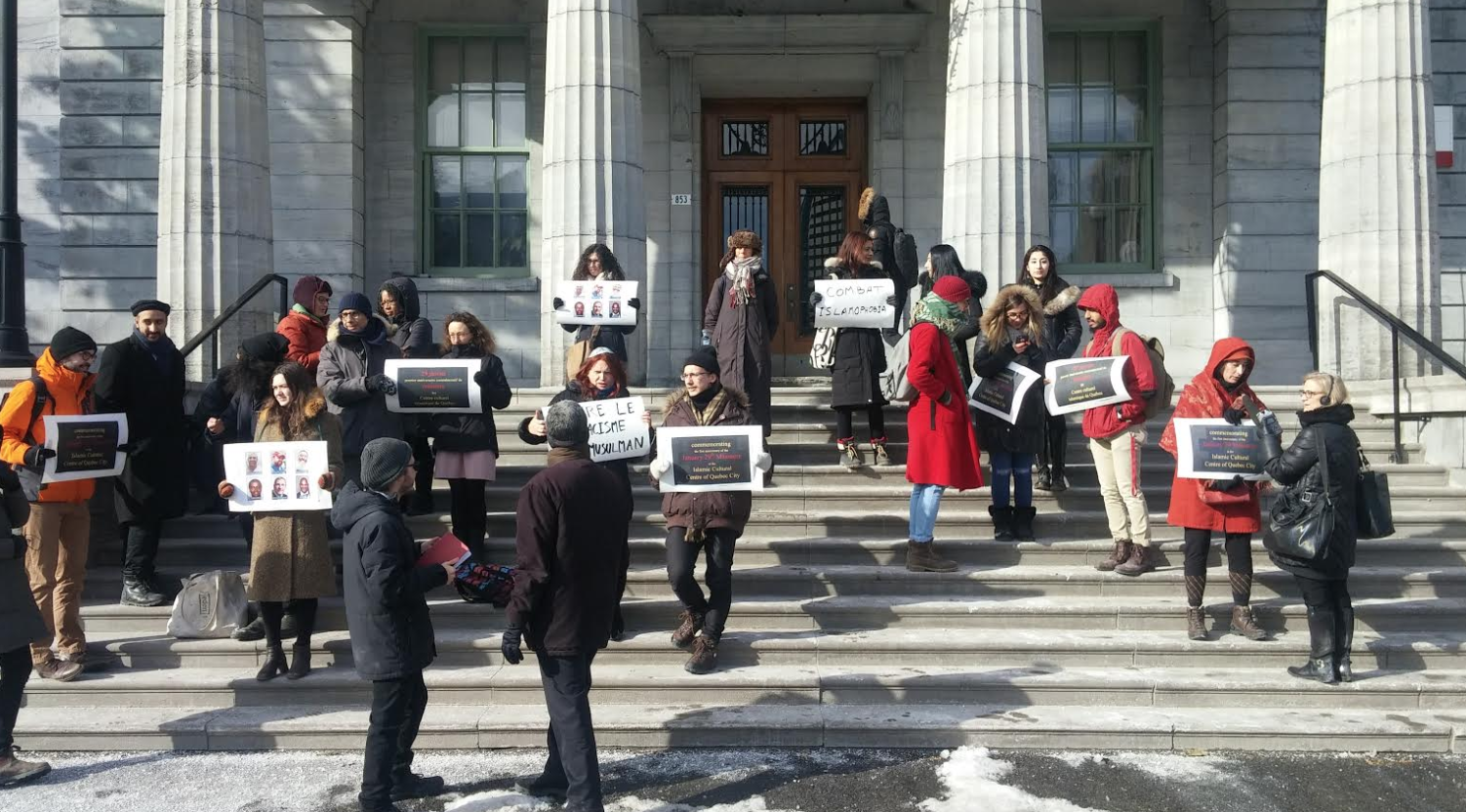 On Monday, January 29, approximately thirty students stood on the stairs of the Arts Building as part of a city-wide anniversary vigil to commemorate last year’s attack on the Grande Mosquée de Québec. The event, organized by the recently founded McGill Anti-Racist committee, was also intended as a means of explicitly denouncing Islamophobia in the province, with signs reading “Combat Islamophobia” and “Commemorating the first anniversary of the January 29th Massacre at the Centre of Quebec City.”

One year later: a rise in hate crime for Quebec and Montreal

The mass shooting, which occurred last January at a mosque in Quebec City, left six people dead and nineteen injured. In Montreal, a ceremony was held in City Hall on Monday, followed by community rallies titled “We Refuse to Forget,” which were attended by more than 1, 000 people in at least seven contingents.

The vigil’s speaker read the name of the victims, and a moment of silence was held for Azzedine Soufiane, Khaled Belkacemi, Aboubaker Thabti, Abdelkrim Hassane, Mamadou Tanou Barry, and Ibrahima Barry.

Francois*, a member of McGill Anti-Racist, spoke with The Daily about standing in solidarity with Quebec’s Muslim community and “mobili[zing] people against the rise of racism.”

“There has been a normalization of violence since last year against people identified as being Muslim,” said Francois.

In early December 2017, the number of hate crimes directed towards Muslims in Quebec City had already doubled from 21 attacks in 2016 to 42 in the first 11 months of 2017. Montreal has also seen a rise in hate crime after the mosque attack; a mosque was vandalized in the Montreal Pointe Saint Charles neighbourhood less than a week after the attack on January 29.

A McGill alumnus participating in the vigil, who wished to remain anonymous elaborated more on such a normalised violence.

“The election of Donald Trump to the American presidency has played a role in validating racism in the U.S., but also in Canada, Quebec, and elsewhere,” so it is important to “stand up against Islamophobia, and any form of prejudice.”

“Quebec city happened a year ago [and] it’s a toxic context that we have right now,” said Mary Ellen, one of the co-organizers of the Plateau Mont Royal contingent, in an interview with The Daily. “We’ve seen the rise of the extreme-right groups […] in Quebec. These discourses expressed by the extreme right, […] and these groups are now coming out with more determination.”

“We’ve seen the rise of the extreme-right groups […] in Quebec. These discourses expressed by the extreme right.”

“This kind of context,” they continued, “causes […] the politicians to then fall behind. They say to themselves, ‘We don’t need to protect the Muslim citizens of Canada, we’re going to do law Bill C-62, we will cancel the inquiry commission on systemic racism.’ Now more recently, when the Muslim communities requested […] the fight against islamophobia, most of the political parties and politicians deserted that idea. […] It’s problematic. […] We will not forget. Six people were killed. These were peaceful citizens.”

“We will not forget. Six people were killed. These were peaceful citizens.”

Reluctance from the Prime Minister’s Office

On January 5, 2018, the National Council of Canadian Muslims (NCCM) sent a letter to Prime Minister Trudeau’s office calling for the designation of January 29 as the National Day of Remembrance and Action on Islamophobia.

Quebec politicians on both the left and the right, including members of the Coalition Avenir Quebec (CAQ) party, and the Parti Quebecois (PQ), and Phillipe Couillard, leader of the Liberal Party of Quebec and the province’s current Premier, have voiced their opposition to a province-wide Day against Islamophobia, finding the language to be too “controversial.” Prime Minister Trudeau, while recognizing Islamophobia as the reason for the massacre, has not adopted a formal position vis-a-vis the letter.

“Many politicians appeared in front of cameras following the shooting, but they are not ready to take any concrete action for real change to happen. They do not understand the gravity of the situation when they dodge the question or outright say no to this idea,” said Ehab Lotayef, an IT manager at McGill.

Lotayef’s blog post, which calls people to voice their support in favor of the National Day of Remembrance and Action on Islamophobia, states that “establishing commemorative days or months are a tool to assert the need for action and solidify support for the downtrodden.”

“What will make Trudeau, Couillard, Mayor of Quebec City Régis Labeaume, or Mayor of Montreal Valérie Plante declare January 29, or any other day, a day against Islamophobia is not the killing of six, sixty or even six hundred people in cold blood in one incident,” insists Lotayef. “What will make them act is when they see 60,000 people marching in the streets of Quebec City, Montreal, and other cities across the province and the country on January 29, commemorating the Quebec City massacre, year after year.”

“What will make them act is when they see 60,000 people marching in the streets of Quebec City, Montreal, and other cities across the province and the country on January 29, commemorating the Quebec City massacre, year after year.”

In response to the letter, the PQ has pointed out that there already exists an international day for the elimination of racial discrimination, but some claim that the province’s electoral context might be playing a larger role in politicians’ response to the NCCM’s letter than many are willing to admit, what with provincial elections to the National Assembly looming in October 2018.

“Politicians just want to win far-right voters, and are afraid to lose some [votes],” said Lotayef. “Bill 62, which passed at the Quebec National Assembly in October 2017, is one example of this trend. The bill prevents any person with clear religious attire to be provided public service. This means that Muslim women who wear the niqab would not be allowed in public transport. It is simply not applicable.”

More to be done at McGill

The McGill’s administration has, in cooperation with the Institute for Islamic Studies, the Muslim Students Association, the SEDE Office, and the Joint Board-Senate Committee on Equity, organized a commemorative ceremony to remember last year’s events, but speaking with The Daily, Francois feels there is “a lot still to be done on campus.”

“McGill should do whatever it can to prevent islamophobic, racist, or xenophobic thought to foster within its communities and […] be supportive and inclusive of groups facing difficulties,” stressed Lotayef. “The situation is getting more and more complicated for Muslims in Quebec. It is dangerous in rare cases, [and] difficult in many cases. […] Actions such as this one [the vigil] show that people do not accept these acts and want Quebec, as well as Canada, to become more inclusive. We should do all that we can as citizens of Quebec and Canada to ensure equality and peace for everyone.”

“McGill should do whatever it can to prevent islamophobic, racist, or xenophobic thought to foster within its communities and […] be supportive and inclusive of groups facing difficulties.”