Bodies with Uteruses are Burdened Unequally 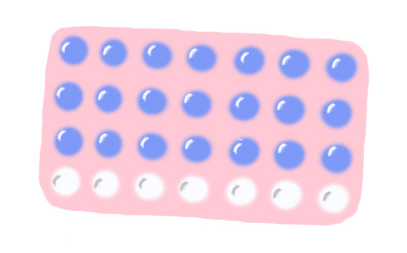 Few topics bridge the gap between labour, body, and care in the way that conversations about contraception do – the term labour itself holds the double meaning of referring to both work and the process of childbirth. Limiting access to contraceptive methods has historically been a way to limit the sexuality of cisgender women, and the different functions of each reproductive system are still being exploited to restrict the sexual freedom of people with uteruses. In areas where contraception is more readily available the labour of managing it is forced onto one group of people.

The sexual pleasure of cisgender men has long been prioritized over the comfort or enjoyment of their non-sperm producing partners. The historical idea that birth was controlled only by the uterus has perpetuated a plethora of unhealthy stereotypes, assumptions, and cultural ideas surrounding sexuality and women. Because pregnancy only physically affects people with uteruses, the role of the body that provided the sperm for fertilization is never brought into conversations about contraception, because their involvement is invisible. This has limited the ideas of pleasure for women; when abstinence is preached as the most effective form of birth control, that means abstinence for women, as they are the only ones who are burdened with pregnancy, and their male counterparts escape the blame. Due to the societal unwillingness to inconvenience people with sperm- producing bodies, gynecological systems have been and continue to be subjected to birth control methods.

The sexual pleasure of cisgender men has long been prioritized over the comfort or enjoyment of their non- sperm-producing partners.

Despite the wide range of birth control methods available to people with gynecological systems, the majority of these still have strong effects on hormones and overall health.

While contraceptive methods in the past were often bulky contraptions, modern science has allowed birth control to be much less invasive, albeit not invisible. The pill, the patch, and the shot (also known as Depo Provera) all rely on hormones that are pushed into the bloodstream to alter the hormonal balance of bodies with uteruses and stop the process of ovulation. The pill is taken daily, the patch is changed weekly, and the shot is typically re-injected every three months. While these forms of birth control seem simple, they wreak havoc on the bodies they inhibit. Weight gain, mood swings, spotting, headaches, and nausea are common side effects of all hormonal methods. Blood clots are also a dangerous long term side effect of the pill. These impacts are not to be taken lightly. 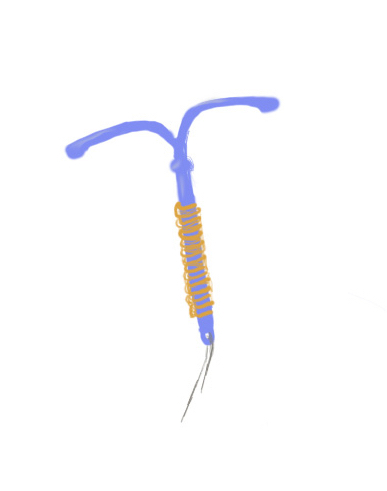 Hormonal Intrauterine Devices (IUDs) release small amounts of the hormone progestin into the uterus. The side effects may be less severe than with other hormonal methods because the hormone is localized. There are also copper IUDs available, which prevent pregnancy because of sperm’s aversion to the metal. IUD strings need to be checked every month, because the device can perforate the uterus if it becomes dislodged. This is a personal self-examination, and assuming nothing goes wrong, the device can be used for 3-12 years. Although the side effects of IUDs are less impactful, certain brands still might cause ovarian cysts which are painful and can result in infertility if left untreated. Additionally, when pregnancies do occur while someone has an IUD, they much more likely to be ectopic pregnancies – a type of pregnancy in the fallopian tubes, which poses a very high risk to the person. These methods of birth control require work to maintain their effectiveness. That work is placed exclusively and unequally on people with uteruses. Additionally, the financial burden that these methods impose is substantial, and often ignored. In the same way that the often prohibitive cost of menstrual hygiene products is ignored, birth control is often looked at as a non-necessity. Why is it that bodies with uteruses are forced to pay for the sexual freedom that sperm-producing bodies are afforded for free?

Why is it that bodies with uteruses are forced to pay for the sexual freedom that sperm-producing bodies are afforded for free?

The larger cost of hormonal birth control methods is their overall emotional toll. The most influential side effect of hormonal birth control is the hormones themselves. Emotional impacts of hormonal birth control have been tested and retested time and time again. In a 2004 study available on the website of the U.S. National Center for Biotechnology Information, the abstract blatantly states that “Current contraceptive use was associated with an increase rate in depression, divorce, tranquilizer use, sexual dysfunction, and suicide and other violent and accidental deaths. Despite the advent of more ‘user friendly’ contraceptives, the discontinuation rate secondary to side effects has changed little through the years.”

One type of body has been tasked with an amount of labour that is deeply disproportionate to their role in something that involves two people.

The threat of pregnancy has dictated cisgender female experiences of sex and sexuality for centuries. Partners not looking to conceive a child are both aware of possible outcomes, yet one disproportionately faces the emotional labour of an unwanted pregnancy, not to mention the physical toll. In addition to the pressure that pregnancy places on people with uteruses, using birth control methods effectively and safely requires labour. People with uteruses have been burdened with taking their birth control pills on time, checking their IUD strings regularly, changing their patches every week, and other measures that essentially translate to constant awareness of their own fertility. One type of body has been tasked with an amount of labour that is deeply disproportionate to their role in something that involves two people.

Hysterectomies are a more permanent solution for those who want it or have health concerns which necessitate it. A hysterectomy is the surgical removal of the uterus, preventing eggs from dropping into the uterus, and therefore putting a complete stop to menses. It is “the most common non-pregnancy-related major surgery performed on women in the United States, with one in three women having a hysterectomy by age 60.” Hysterectomies are still a major surgery, and recovery and side effects are still dangerous.

If we want to share the labour of contraception between more than one type of body, we need to change the conversations we have about safe(r) sex. 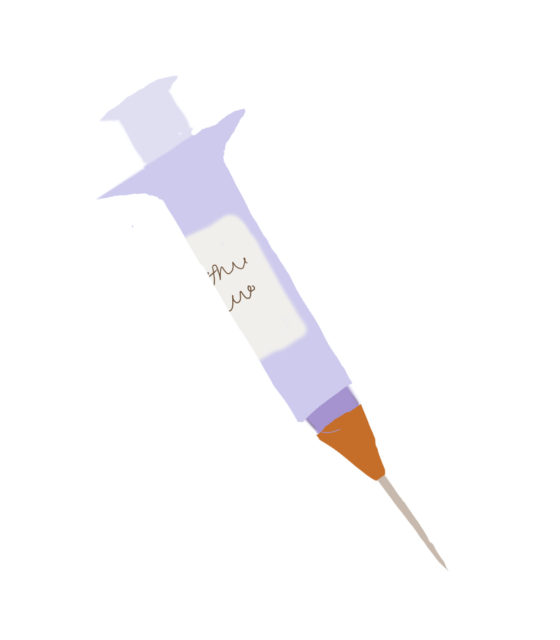 Hysterectomies are gender- affirming services for many people, and their role in allowing people to feel comfortable in their bodies is important to recognize. The societal emphasis on having biological children sometimes leads to people being cautioned by their doctors that they may regret their inability to give birth later. The aim of broadening conversations about contraception and sexuality is to ensure that everyone feels like they have a choice.

The stark contrast between hysterectomies and vasectomies is most visible in the side effects and dangers of the procedure. Between vasectomies and hysterectomies, the procedure associated with more danger, recovery time, and side effects is the latter. The dangers of hysterectomies cannot be overlooked in favour of perpetuating the assumption that uteruses must be controlled and not placing that responsibility at the source of fertilization: sperm. When looking for permanent forms of birth control, vasectomies should be considered as an option, as long as the sperm-carrying body can safely undergo the procedure.

Logically, the safest place to stop pregnancy is not in the uterus, but with the sperm; ensuring that sperm cannot reach the egg instead of focusing on inhibiting the egg- producing system. However, while vasectomies present a permanent solution for sperm control, they are not a realistic option for people looking to stay fertile.

So, what do we turn to? The currently available options for sharing the responsibility of contraception with bodies with penises are minimal, including condoms and a sperm-control pill.

Condoms are 85 per cent effective in preventing pregnancy, according to Planned Parenthood. This means that 15 out of every 100 couples who use condoms as their only method of birth control will get pregnant each year. These odds are often countered by the use of “the pill,” whose use is accompanied by negative side effects in many women.

Side effects associated with current birth control methods are tolerated because they mirror possible effects and complications of pregnancy, but are typically less severe. For example, birth control pills raise the risk of users developing blood clots, but pregnancy increases that risk ten times more – and so these pills are widely available despite the potential consequences. The tolerance for side effects in bodies without uteruses is much lower because the threat of pregnancy is not present. There are no differences between people with and without uteruses and their ability to tolerate pain or discomfort, but convenience for sperm-producing people has been prioritized above all else.

Results from clinical trials testing the efficacy of a male birth control shot performed published in 2016 show that the shot was an effective method of suppressing sperm release. The most common negative side effects described by the subjects were acne, injection site pain, increased libido, and mood disorders. Interestingly enough, many of these side effects are reported from people taking the birth control pill, and risks associated with IUDs can be even graver. Somehow, these possible consequences were not enough to stall the development and distribution of female contraceptive methods, while sperm control has been all but abandoned by the scientific community.

Since the US Food and Drug Administration (FDA) has no guidelines about what levels of safety and effectiveness a male sperm control pill would need to be approved, drug companies are unmotivated to back research in this area. If we want to share the labour of contraception between more than one type of body, we need to change the conversations we have about safe(r) sex. Sperm control is not an impossible goal for contraception – we just need to commit to making it happen. 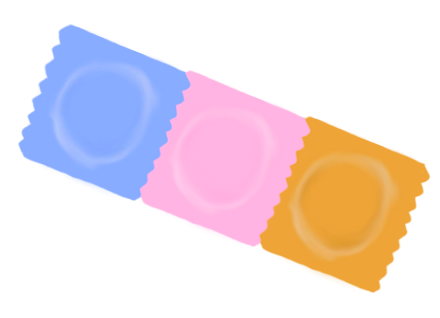 Sperm control is not an impossible goal for contraception – we just need to commit to making it happen.

Common contraceptive methods, apart from condoms, affect the hormones of the body that they’re used in to prevent the uterus from being hospitable to a pregnancy. These uterine birth control methods are uncomfortable and often painful devices that have a lower guarantee of effectiveness than forms of contraception that target sperm count. Sperm control would be a more effective and less invasive way of preventing pregnancy, but the idea that men should shoulder the responsibility of keeping their sperm out of their partner’s body is one that somehow never comes up in conversations about safe(r) sex. Bodies with uteruses are the only ones being tasked with preventing pregnancy, perpetuating a misrepresentation of how pregnancy occurs. Social emphasis on gynecological systems, and stopping fertilization within the uterus, results in forms of contraception that are biased towards one type of body. It’s time to redistribute this labour. 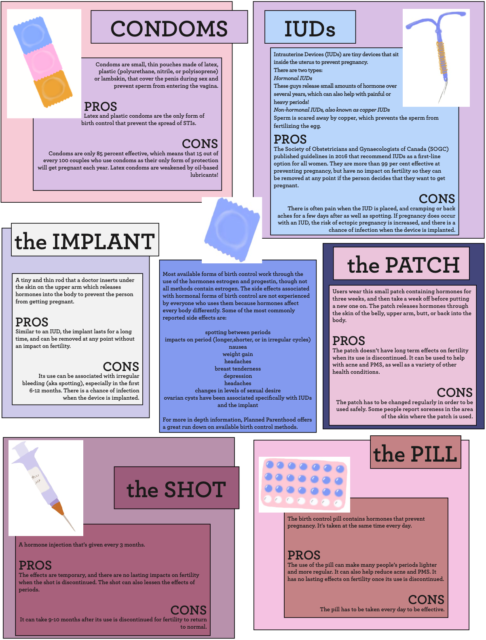 For more information on birth control check out our infographic on options for bodies with uteruses.

This article is a part of our joint issue with Le Délit on Labour, Body, & Care. To read their pieces, visit delitfrancais.com