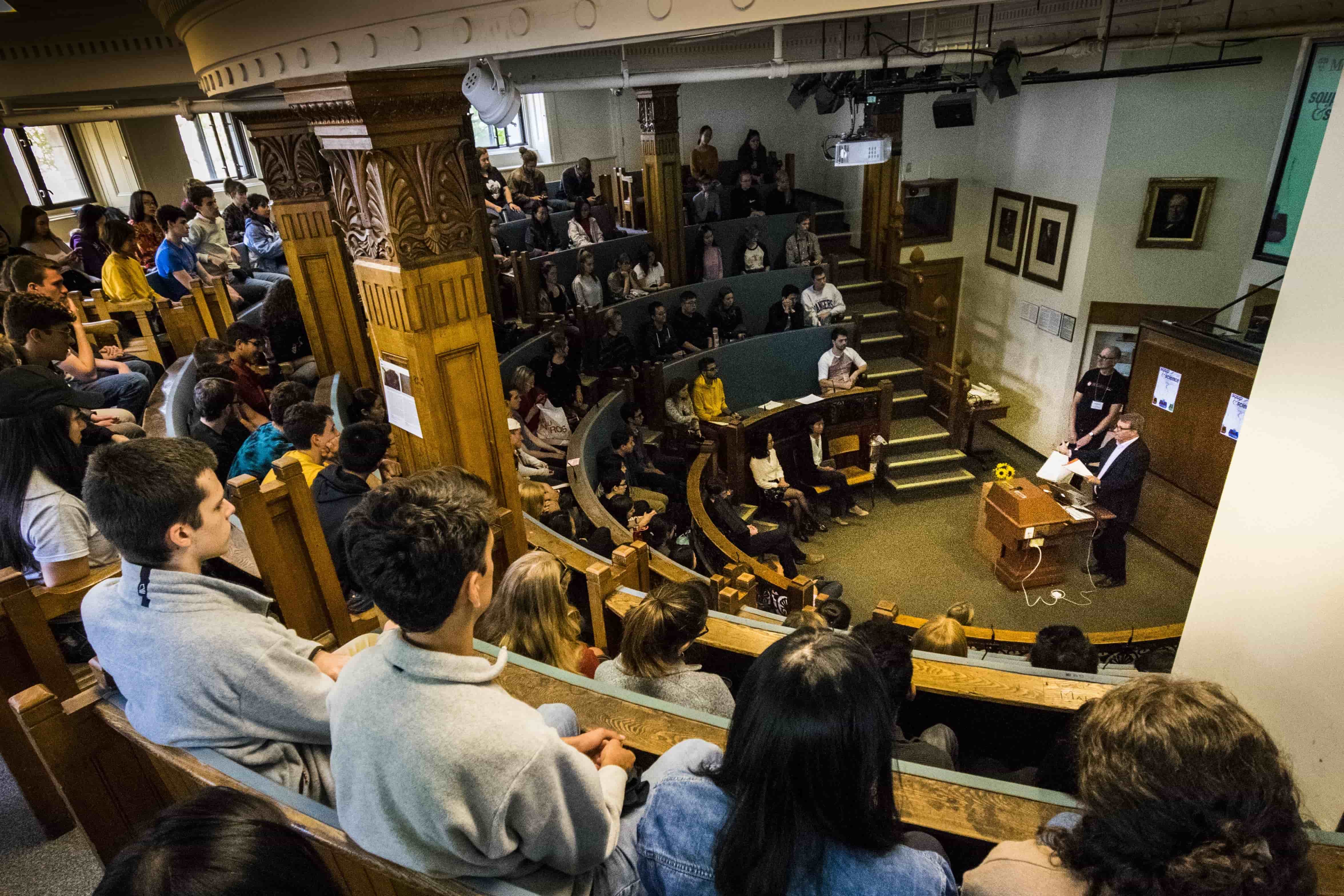 The 28th edition of Soup and Science, which took place from September 9 to 13, provided an opportunity for students to find out more about the scientific research being conducted at McGill from professors across multiple departments and disciplines. Held in the Redpath Museum every semester, Soup and Science is a collection of mini talks, giving each professor three minutes to present their research interests and current projects. After a brief question-and-answer period, students and faculty have the opportunity to start more informal discussions over refreshments (including soup, of course). In an academic setting where approaching professors and starting dialogues about research can feel constrained and awkward, Soup and Science offers a great opportunity for easygoing, accessible student-faculty interaction.

The event opened each day with a short presentation from an undergraduate research ambassador, who shared their experiences and advice to students wanting to get involved in research. One of the ambassadors, Daniel Krauss, an undergraduate biochemistry student working in the lab of Dr. Hanadi Sleiman, retold how he first came to be involved in the lab, encouraging students in the audience to reach out to professors regardless of department. He also spoke about the research being done in Dr. Sleiman’s lab, which revolves around DNA nanotechnology: using DNA strands as potential ‘building blocks’ in the creation of “unique 3D structures for uses in applications such as drug delivery and organization of other materials.”

In a similar vein, Dr. Paul Wiseman, from the Department of Chemistry and Physics, described his research as being at the intersection of physical science and biomolecular imaging. He explained his lab’s interest in the use of chemistry and physics as a way of looking at the “molecular mechanisms involved in cellular adhesion,” or the way cells stick together.

Another professor presented her work in computational medicine. Dr. Nicole Li-Jessen’s lab is focused on understanding vocal fold biology and wound healing, with an emphasis on how the larynx is “critical to our daily breathing, communication, and swallowing functions.” She explained that the goal of her lab’s work is to “advance personalized medicine in voice and upper airway dysfunctions,” by creating “patient-specific computational models” that would allow physicians to anticipate vocal fatigue and prevent vocal tissue injury.

For patients currently suffering from vocal cord damage, there are few diagnosis or treatment options that aren’t invasive and risky procedures. Dr. Li-Jessen’s lab is working on designing personalized injectable biomaterials that could replace the current solution of invasive throat surgery, which is accompanied by high risks and a long recovery time. Instead, this biogel could be easily injected into the patient’s vocal tissue, its regenerative properties working to repair the tissue. Dr. Li-Jessen’s lab is also developing methods of non-invasive diagnostics, as laryngeal disease is currently diagnosed through invasive procedures that “can cause irreversible vocal fold scarring.” These three projects would significantly improve patient care, and allow for physicians to treat vocal injury much more effectively.

An important area of interest for researchers at McGill is the understanding of biological molecules. Dr. Natasha Chang, an Assistant Professor in the Department of Biochemistry, presented her research, which focuses on understanding the molecular mechanisms that regulate adult stem cell function during tissue homeostasis and regeneration. Muscle stem cells are highly regenerative, which makes them useful as models for studying the deregulation of the cell cycle, which results in degenerative disease and cancer. Dr. Chang’s lab uses experimental visualization to examine Duchenne muscular dystrophy and rhabdomyosarcoma (a form of cancer) as models for understanding exactly why muscle stem cells become deregulated.

Dr. Gary Brouhard, a faculty member in the Department of Biology, studies another crucial part of molecular biology: microtubules, which are important structural components in a cell’s cytoskeleton. Microtubules are rigid but non-static polymers which can ‘shapeshift’ by constructing and deconstructing themselves depending on the cell’s structural needs. Experiments in his lab seek to understand the molecular behavior of these microtubules and what influences their polymer formation. Dr. Brouhard’s lab also examines how microtubules influence disease, with specific attention on a protein called doublecortin (DCX), whose mutations cause a heritable form of epilepsy (double cortex syndrome). As DCX influences the shape and function of microtubules, Dr. Brouhard’s experiments aim to better understand the role of microtubules in this disease in the quest to develop pharmacological therapy.

Dr. Jonathan Sievers, an Associate Professor in the Department of Physics, presented his research, which searches for the signature of dark energy in an attempt to better understand the birth of the first stars in the universe. He described the Hydrogen Intensity and Real-time Analysis eXperiment (HIRAX), a radio telescope array that can map nearly all of the southern sky, with the intent of measuring leftover ripples in the distribution of galaxies that are imprinted by the primordial sound waves that existed in the early universe. This can be used as a ‘ruler’ for charting the expansion history of the universe and for shedding light on the nature of dark energy.

For students interested in the environment, Soup and Science invited several researchers to discuss their more field-oriented research. From the Department of Biology, Dr. Laura Pollock presented her research’s take on ecology: working with quantitative “big data” to better model ecological systems and biodiversity. She cleverly pointed out that we tend to harbour our own biases toward animals we find “cute” or appealing, and that we invest our biodiversity conservation efforts into their survival, meaning many species in need of protection fall under the radar. With better modeling of our knowledge on biodiversity across different landscapes, Dr. Pollock hopes to answer the fundamental questions: “Which species are being overlooked, and how can we better address their conservation?”

From the Department of Earth & Planetary Sciences, Dr. James Kirkpatrick’s research also focuses on better understanding an aspect of the environment: earthquakes. With the interactive use of rock samples, Dr. Kirkpatrick explained that while earthquakes can be measured, they cannot be predicted, as the origins of earthquakes and other tectonic movements originate from over 10,000 kilometres below the surface of the Earth. His lab’s activities range from field observations in mountaintops to performing experiments in the F.D. Adams basement, all with the intent of developing knowledge on the mechanical response of rocks and how they react under various applied stresses.

Running for five days at the beginning of each semester, Soup and Science provides an invaluable overview of the various research activities going on across campus, and the opportunity to discuss and mingle with experts. For those who couldn’t make it, don’t worry: the next edition of Soup and Science will be held in January 2020.