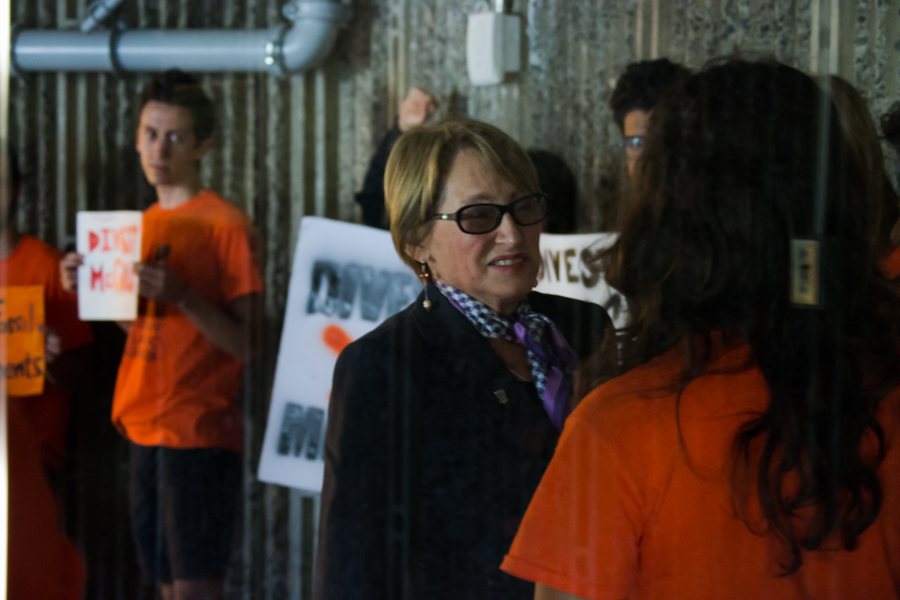 On September 24, McGill’s Senate convened for its first meeting of the 2015-16 academic year. The senators discussed, among other things, the probation of the undergraduate medicine program, three questions regarding McGill’s response to the Truth and Reconciliation report, McGill’s alleged violation of provincial Bill 100, and physical accessibility on campus. The senators also discussed the annual report on the Policy on Harassment, Sexual Harassment and Discrimination Prohibited by Law.

Before the meeting started, members of Divest McGill picketed outside the doors of Leacock room 232, where Senate meetings take place. The group was able to stop Principal Suzanne Fortier and talk to her before she made her way into the meeting.

Speaking to The Daily, Divest McGill organizer Kristen Perry said, “We had invited [Fortier] earlier in the week to come to some of [Fossil Free Week] events. And she said [that] she was looking out of her window, and [that] she didn’t see anything going on. And I think that’s really indicative of how disconnected she is from the university.”

“We have […] so many students, so many professors, so many community members out there in [Community] Square, supporting us and calling for a freeze on fossil fuel investments, calling for the Board [of Governors] to take the issue of divestment and climate change seriously – and she’s saying she sees nothing,” Perry continued.

Sam Quigley, another organizer with Divest McGill, explained that the group asked Fortier to support its request to freeze McGill’s investments in the fossil fuel industry when it was brought up at the Board of Governors meeting.

In an interview with The Daily, Fortier said, “My answer was that this is not only of my calling here. There’s a process. There’s a committee that looks after these issues. […] That’s where it would be considered. It would be inappropriate for me to express my own view. ”

Responding to the Truth and Reconciliation report

On June 2, 2015, the Truth and Reconciliation Commission (TRC) of Canada released its final report, after seven years of investigations regarding the colonial legacy of Canada.

In their written response to the question, Deputy Provost (Student Life and Learning) Ollivier Dyens and Dean of Students André Costopoulos talked about Portage McGill, a “new process to help [Indigenous] applicants and potentially other underrepresented groups gain admission to McGill.”

Speaking to Senate, Provost Christopher Manfredi said, “We’ve got, I think, an opportunity to be a leader in the full range from the […] recruitment and support of [Indigenous] students, to the research and teaching on […] Indigenous issues both in Canada and abroad.”

McGill has historically been hesitant to take symbolic steps such as moving the Hochelaga Rock to a more prominent position on campus or flying the Hiawatha Belt Flag on National Aboriginal Day. When asked by The Daily how the University is planning on becoming a leader in this area, Manfredi gave the example that Indigenous students are recognized as such when they graduate.

“We’ve [also] established the Indigenous Studies program. We’ve had an opportunity last spring to create some stability in that program by creating a tenure track position.”

In response to comments that most Indigenous rights initiatives on campus were led by students, Manfredi mentioned that the administration was receptive to student input throughout.

“I don’t think that’s true. With the Indigenous Studies [minor] I told the students that I had to be sure that students supported that program, and […] they rose to the challenge and they did it.”

Accessibility and universal design on campus

Rourke and Sobat posed another question: “What current processes and evaluation procedures are in place within McGill’s decision-making structures to ensure the prioritization of physical accessibility on campus?”

However, Campbell noted that she was unable to present a timeline for the projects.

In regards to the progress of accessibility, Campbell told Senate, “Our first meeting will happen in early November and it deals with things, not only physical access but also things like gender-neutral washrooms.”

Campbell also presented the annual report on the Policy on Harassment, Sexual Harassment and Discrimination Prohibited by Law. According to Campbell, “Last year, there were 23 cases brought forward, down from an average of 36 cases in the previous eight years.”

After Campbell presented Senate with various figures pertaining to sexual harassment at McGill, Fiona Ritchie, a senator and an associate professor in the Department of English, referred to The Daily’s feature “Let’s Talk about Teacher” (Features, page 11, September 1). She stated that at the end of the article, the writer expresses uncertainty with regards to what degree sexual harassment policy applies to student-faculty relationships, and that the writer’s “perception of the policy is that it is very unpleasant” for complainants. Ritchie went on to inquire if there was a problem with students not being aware that that policy was “something they [could] have recourse to,” and whether there could be something Senate could “do to change that situation.”

Campbell responded that “the policy is open to students and is used by students.” However, she added that they were looking “at ways to make the process not only more effective, but also […] to ensure that [those] coming forward [are] in circumstances that are safe for those who wish to make the disclosure.”

Another topic addressed at Senate was that of McGill’s undergraduate medicine program which was put under probation over the summer.

Dean of Medicine David Eidelman stated, “Every medical school’s dean’s nightmare is to be put on probation.”

However, despite this, Eidelman expressed that he was not extremely worried about the program staying accredited, as they intend to formally submit the plan to follow the accreditation body’s requirements by December 1, 2016. He also added that the Faculty of Medicine had quickly established a working chair in order to ensure that they had a response for each complaint.

Moreover, Eidelman added, “It’s a good opportunity for students [who have been] involved in every aspect [and] have been some of the most effective spokespeople.”