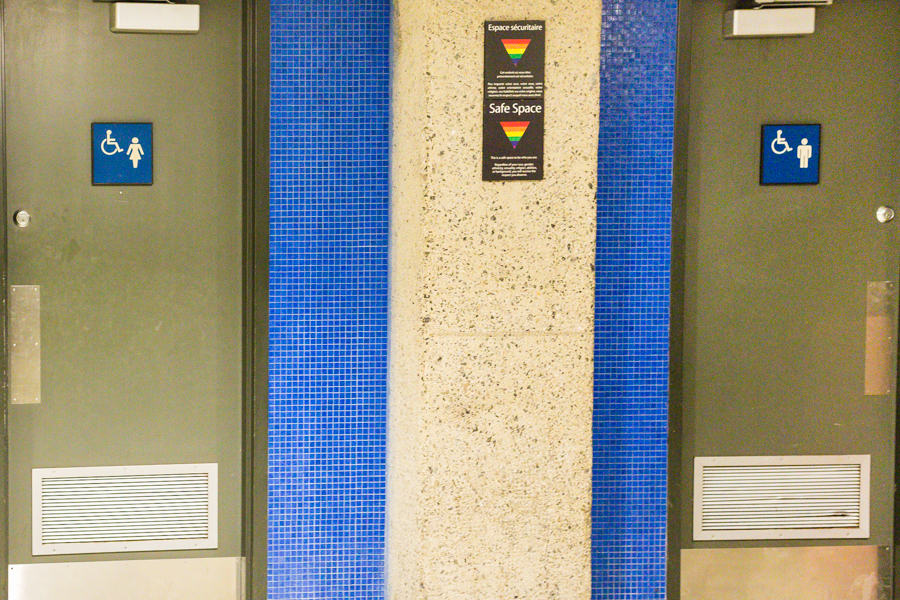 As part of the lengthy renovations of the Redpath Library, students can expect revamped washrooms – this time, with one that is accessible and gender-neutral. With partial funding from the Students’ Society of McGill University (SSMU) for the renovations, the construction of the washrooms will tentatively begin in May 2015, with a projected completion date of August 2015. The oversight committee for the Redpath Library washroom renovation project will oversee the planning, design, and implementation of new washrooms.

“The fact that there [are] gender neutral bathroom[s] means that people can just go evacuate bodily fluid without fearing for their lives,” Gabrielle Bouchard, the Peer Support and Trans Advocacy Coordinator at the Centre for Gender Advocacy, told The Daily.

According to the Social Equity and Diversity Education (SEDE) Office’s website, “A gender-neutral washroom is a single-person facility which is not labelled male or female but rather is available to anyone, no matter what their gender identity or biological sex.”

Reflecting on their personal views, Leela Scott, the co-op coordinator for the Union for Gender Empowerment and a representative on the oversight committee, wrote in an email to The Daily, “These spaces are important because despite being in an academic institution surrounded by people who would like to think of themselves as very educated and accepting, there are still a lot of really toxic behaviors and opinions present.”

“Even in universities, trans and gender non-conforming people have been subjected to physical, sexual, and emotional violence for using what someone decides for them is the ‘wrong’ bathroom,” they said, adding, “More commonly, a well-meaning person telling someone ‘I think you’re in the wrong bathroom…’ can be very traumatizing for a trans or gender non-conforming person.”

The Redpath Library renovation project did not always include plans for a gender-neutral washroom. Faced with problems securing funding, the Library approached the Library Improvement Fund last year, which is a SSMU fund of student fees and alumni contributions allocated toward capital improvements in McGill’s library.

“As the goal of the fund is not to take over the financing of operational projects from the University, we felt that it would be inappropriate to cover the cost of the entire renovation,” explained Erin Sobat, the Library Improvement Fund Coordinator, in an email to The Daily. “The committee that allocates the fund, which is comprised of student fees matched with alumni contributions, agreed to provide partial seed money in March ‘on the condition that a gender-neutral washroom be included in the redesign.’”

The majority of the members on the oversight committee for the renovations – which will review architectural plans, budgets, and timelines among other things this year – are university staff, but there are also three students, a significant inclusion according to Sobat.

“I’m a bit disappointed by the seeming lack of knowledge and research many of the others have. Obviously I know not everyone is interested or has the time to know everything, but gender is a part of this project (as it is with any project, really) and I think it’s their responsibility as paid employees to be aware of these things.”

“I thought the teamwork between the SEDE Office, our office [CSP], and the students was really great,” said Adler. “I think it’s a good sort of framework for the University to advance.”

Over the next year, Adler said that CSP will be looking at securing funding for signage, locks, and other basic changes so that they can further convert washrooms on campus.

When asked whether the University has plans for having gender-neutral washrooms in every building, Adler said, “We haven’t projected that far down the road yet […] we’re going to follow the priorities of [SEDE’s report]. That will probably take us through the next year or so, and I guess we’ll reassess it with SEDE to see if we’re still missing needs or not.”

Scott felt that McGill’s progress still left a lot to be desired. “Unfortunately, change comes rather slowly in an institution like this,” they said. “While policy says they’ll strive toward having a ‘gender-neutral’ washroom on each floor in each building, right now some buildings have none, and many others only have [one].”

Scott added that they had raised concerns about the original plan for the Redpath Library renovations, which was to have men’s and women’s washrooms along with a single-stall washroom. The committee changed the design to include two gender-neutral stalls, but Scott pointed out that this overlooked the potential for safety problems, adding that they were looking into implementing multi-stall, ‘all-gender’ washrooms along with Sobat.

However, overall, Scott said that the renovations were a good step. “Access to washrooms is something that is often overlooked when thinking about how to make an institution safer because it seems so basic, but really – how many times a day do you go to the washroom? When it’s something you can do easily, without fear, you don’t think about it. But when it’s difficult and/or unsafe it can really affect your life and that’s really unfair.”