Right to sell sandwiches central to AUS’s negotiations with University 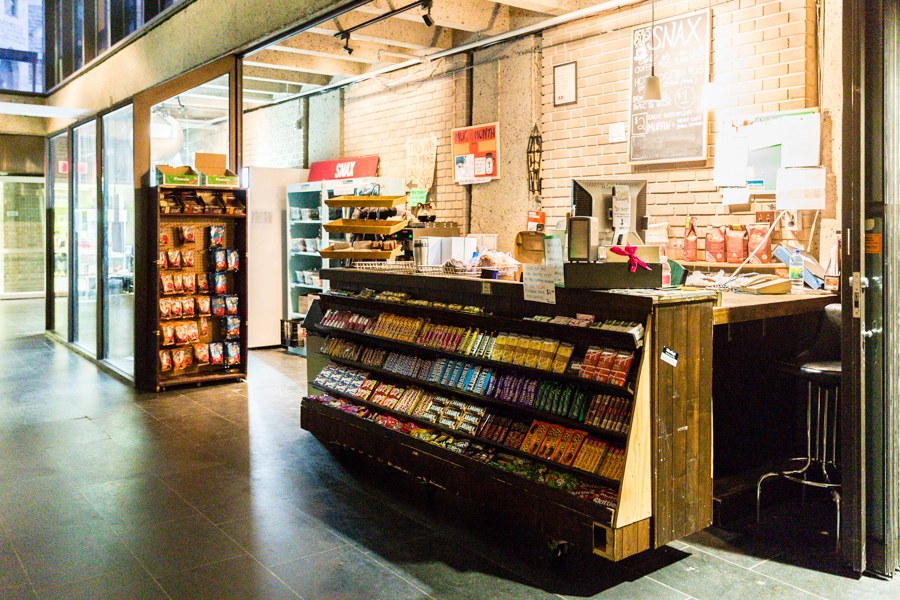 SNAX employees, students, and supporters gathered on March 11 in the Leacock building to protest the McGill administration’s current position against sandwich sales at the Arts Undergraduate Society (AUS)’s food stall, and to visibly assert that student-run spaces are an essential and valuable aspect of campus life.

A cease-and-desist order on sandwich sales has been in effect since November, when AUS received notice from the administration that it was violating the terms of its Memorandum of Agreement (MOA) by selling the sandwiches. Since then, the subject has become a site of conflict in AUS’ ongoing MOA negotiations with McGill.

The sit-in, attended by roughly fifty participants, was organized with the intention of attracting the attention of both the administration and the student body at large.

“We want the administration to know that there are other people [than SNAX employees] on campus who think that this is something that’s important,” SNAX Assistant Manager Emma Meldrum told The Daily.

Deputy Provost (Student Life and Learning) Ollivier Dyens hosted a “meet and greet” style lunch in Redpath’s Première Moisson during the sit-in hours, but did not respond to The Daily’s request for comment about the sit-in or to tweets from the sit-in directed at him under the hashtag #SaveOurSandwiches.

The article continues below.

Meldrum told The Daily that the inclusion of sandwiches in the official list of things that AUS is allowed to sell is the only change that SNAX is seeking from the negotiations.

“I think our goals remain the same, and I think the sandwich issue has kind of compounded and reminded us of the goals of SNAX,” said Meldrum.

“We are a service for students, so we’re trying to think of how we can give better service for students, and the sandwich issue has reminded us that part of our role is offering an actual meal to people; they don’t just need snacks, they need an actual, affordable meal that suits their dietary needs,” continued Meldrum.

The initial concern presented to AUS and SNAX by the administration highlighted liability concerns linked to the potential dangers inherent to SNAX’s nature as a food provider and the potential costs the University could incur if something went wrong.

AUS President Ava Liu denied the claim that SNAX might become a risk to the University.

“First of all, it’s just plain not true. AUS is a non-profit corporation, we have our own corporate status in the Quebec government, we have our own insurance policy. So that’s not true, and he knows that.”

In response to the initial concerns raised about liability, the SNAX team completed Quebec’s health inspection and certification process and compiled evidence to indicate that liabilities had never been an issue in the past.

Liu noted that the certification process is intended for those involved in the preparation of food. “We don’t make food, we don’t even serve food. All we do is sell food,” she said.

Dyens also cited issues other than liability. “I don’t have an issue with student-run business, but then they have to work with our current business structures.”

Inconsistencies in the administration’s arguments

“[The administrative stance] really is evolving,” said Liu. “At first, it was liability and health. Then it was competition, and then it was ‘slippery slope,’ [regarding] how they don’t want any increases of any rights.”

A recent statement from AUS notes that during negotiations, “The University has now outlined a hard-line policy against the ‘expansion’ of student-run food services […] based on the argument that concessions to one group will open the door to others making similar requests.”

When Dyens was asked about the whereabouts of this policy, he stated that there was “no policy on student-run services.” When asked to clarify the circumstances presented by Campbell, he said this unwritten policy is “something the University is presenting during these negotiations.”

Liu also alleged that Campbell had said things like “we do not support any increase in the rights for student-run services” during negotiations.

According to Liu, Campbell has also alluded to AUS representatives that AUS is “lucky” to have held on to SNAX for this long. “There was a lot of that – [Campbell] kept saying, ‘we support you existing, that’s why you still exist, this is a good deal, don’t make it bigger than it is, don’t make it worse.’ She kept saying the University could be really creative with the space […] and she’s said that many times.”

Dyens described SNAX as “pushing the envelope constantly.” He later said, “If students don’t want us to take a hard stance, then they have to respect the terms of the agreement.”

Dyens also said he was concerned about how SNAX might affect the University’s overall budget, and noted that revenues from traditional food service providers benefit the University.

“Why is student autonomy so bad? Why [is the administration] linking this to the whole slippery slope argument?” said Liu.

She continued, “The position the University is in looks very petty, and to be honest I think that we look petty too, because now this is about sandwiches, and obviously this is ridiculous. Obviously the bigger issue at stake is the issue of autonomy, especially when given proof that there is no issue of liability or risk.”

“It’s not SNAX per se, it’s opening the door to something,” Dyens told The Daily. He later said, “the fact that SNAX is such a big issue tells me that this is something that students want to do with other food things on campus.”

Meldrum touched on this point as well. “In my mind, [greater choice] is not a problem, of course, because it would be wonderful if other outlets on campus could sell anything that they thought that students needed and weren’t getting from Food and Dining Services.”

Misconceptions over the administration’s position

Both Meldrum and Liu clarified some common misconceptions surrounding McGill’s motives and stance; namely, correlations between this incident and the Arch Café closure in 2010 and pressure from other food service providers on campus.

Regarding competition from other food service providers on campus, Liu said that McGill’s Senior Director of Student Housing and Hospitality Services Mathieu Laperle and Food and Dining Services executive chef Oliver De Volpi had debunked allegations of increased competition from SNAX fare, comparing it to an extra samosa sale.

“They really don’t care. They said, ‘that’s between you and the University, it’s negligible.’”
Laperle and De Volpi did not respond to The Daily’s requests for comment.

Liu noted that, in her personal opinion, the administration has not necessarily been acting out of bad intentions. “I think that, at this point, they’re just unprepared with negotiations, and they’re not really taking it seriously and that’s why they’re going back and forth between these positions.”

Meldrum spoke to SNAX’s future plans. “Clearly we can’t make guarantees about the next management teams,” she said, “but we’re doing our best to have that included in the contracts that they sign, and the training packages that we’ll give them at the end of this year.”