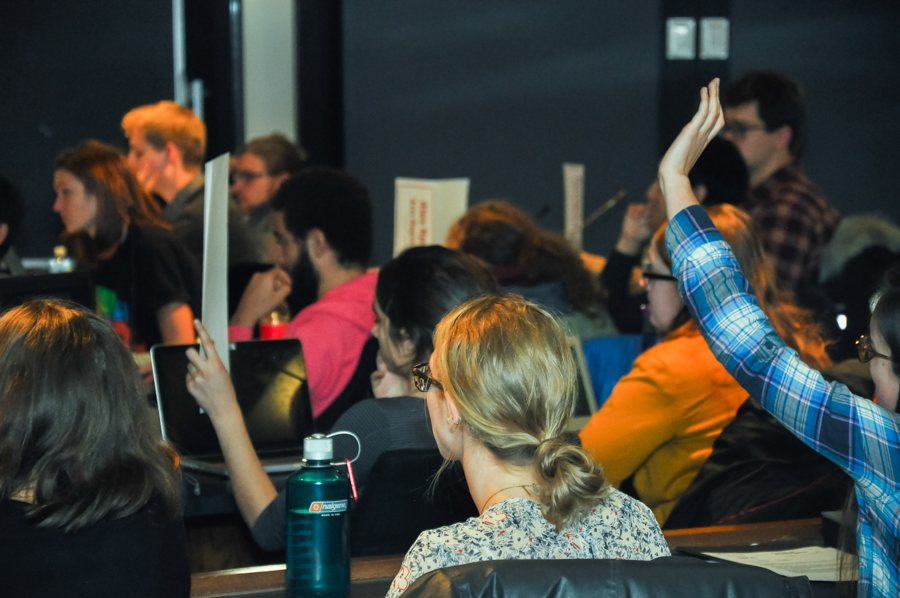 Principal Suzanne Fortier and Deputy Provost (Student Life and Learning) Ollivier Dyens made an appearance at the Arts Undergraduate Society (AUS) Legislative Council meeting on January 14 to field students’ questions and discuss negotiations between AUS and the administration over their Memorandum of Agreement (MOA). Councillors also formed a contingency plan to fulfill the newly-vacant VP Internal position’s responsibilities, and VP Finance Li Xue presented a review of the AUS budget.

Deficit to be covered with idle funds

The 2014-15 AUS budget includes an operating deficit of $12,703, which Xue attributed primarily to unforeseen Frosh week expenses. The AUS currently has over $265,000 in idle funds from the operating surpluses of previous years, which will be used to balance this year’s budget.

President Ava Liu argued that a lack of surplus is indicative of the organization better serving the needs of its constituents – a substantial surplus would indicate that, as a not-for-profit organization, AUS was overcharging students for its services.

Xue acknowledged that work can be done to reduce deficits while increasing the value of services. “We’re trying to streamline our internal processes,” she told The Daily. “We have an internal audit we’re conducting right now.”

With Fortier and Dyens present at Council, councillors took the opportunity to express their dissatisfaction with the current status and enforcement of the MOA – the document that outlines AUS’ legal relationship with the University – which is set to be renegotiated later this year. Councillors were particularly concerned with the newly-enforced ban on the sale of sandwiches and prepared foods at the student-run food outlet SNAX.

Dyens emphasized students’ responsibility to respect the existing MOA. “I think the University has shown flexibility in not coming down very quickly on students,” he said, while also noting a desire to arrive at a mutually beneficial agreement when the MOA is renegotiated.

Concerned that the University views SNAX as a liability, a SNAX staffer told Council that they are working to get health and safety certification for employees, have undergone a health inspection, and are insured under AUS.

One councillor asked Fortier to reconcile the increasing support for divestment and her apparent commitment to engaging with the McGill community with the fact that McGill still has financial holdings in fossil fuels.

Fortier replied that she did not have personal authority over this type of decision, which must proceed through official channels, namely the Board of Governors’ Committee to Advise on Matters of Social Responsibility (CAMSR).

“[Many expect me] to impose, and to act in fact as a dictator, that is not the way we work,” she said.

No replacement for VP Internal

Council once again grappled with the logistics of a vacant executive position, as VP Internal Roma Nadeem will not be at McGill this semester due to health problems.

While Council does have the authority to appoint a temporary replacement in accordance with the AUS constitution, it elected to leave the position vacant for the time being at the suggestion of President Ava Liu. Aspects of the VP Internal’s portfolio will be distributed among the remaining AUS executives, while the position’s crucial administrative responsibilities concerning room rentals and liquor permits will be taken over by a student employee.

Although this is the fourth resignation the AUS executive has seen this semester, VP Academic Erin Sobat emphasized that there is no need for emergency appointments.

“There is still someone in the position, they’re on leave, and we are filling the administrative requirements of that position through other means,” said Sobat.

On recommendation of the Constitutional and By-Law Review Committee, Council passed a set of changes to electoral bylaws for AUS and departmental associations. Council also voted to add an ad-hoc Event Planning and Implementation Committee (EPIC) seat to Council in order to “strengthen communication between councillors and members of EPIC,” according to the motion.

A previous version of this article stated that Liu would be appointing a new VP Internal in the future. In fact, the position’s requirements will continue to be filled by other AUS executives and an internal student administrator. Additionally, the article originally attributed the argument “a lack of surplus is indicative of the organization better serving the needs of its constituents […]” to Xue. In fact, this was said by Liu. The Daily regrets the errors.