SSMU launches survey on quality of life at McGill 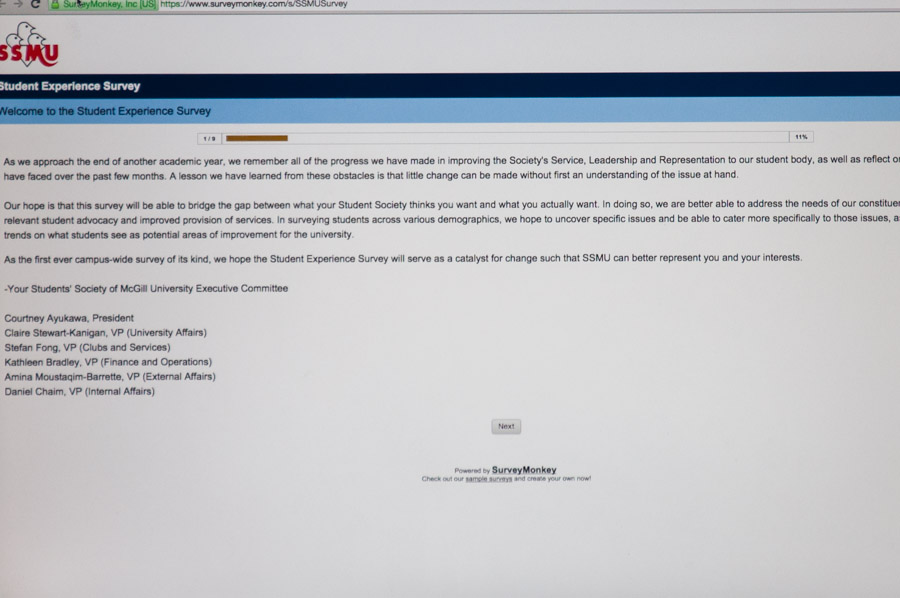 SSMU VP Clubs & Services Stefan Fong told The Daily, “One of SSMU’s main criticisms is that [it] doesn’t listen, and [it] isn’t relevant […] we want to combat that and address that.”

The survey is also meant to provide the administration with clear numbers and trends regarding student discontent, and provide stronger supporting arguments for SSMU when pushing for student initiatives and defending community concerns.

“There are some hard truths that will come out of the survey, clear trends are already emerging,” Fong added.

“There are some hard truths that will come out of the survey, clear trends are already emerging.”

The survey, which takes about 15 to 20 minutes to complete, is incentivized: the first 500 users to complete the survey were awarded a coupon for a free slice of pizza from Pizza Navona. In addition to this, Fong testified that increased student participation would “unlock prizes,” hinting that once the threshold of 1,000 surveys has been met, more prizes will become available. Additionally, all who complete the survey will be entered in a raffle for prizes that are unknown as of print.

Inspiration for the survey was taken from similar projects on other Canadian campuses, according to Fong. He cited a survey done at the University of British Columbia (UBC) that found that students in the faculty of science were the only ones consistently dissatisfied with student services, leading UBC to restructure science advising.

“We’re not afraid of getting shit on, ourselves,” Fong told The Daily. “That’s what we want to know – what people have to say.”