On the aftermath of the SSMU General Assembly 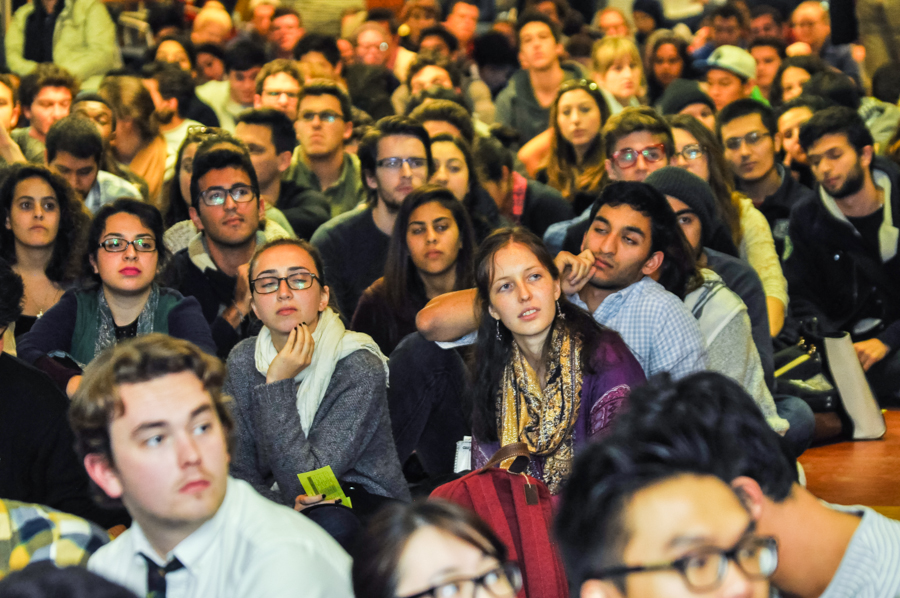 The motion brought to the Student’s Society of McGill University (SSMU) General Assembly (GA) on October 23 by petition calling on the society to “stand in solidarity with the people of the Occupied Palestinian Territories” was, and will continue to be, entirely endorsed by McGill Students in Solidarity for Palestinian Human Rights (SPHR). In calling on SSMU to condemn the atrocities committed against Palestinians, the motion did not condemn any single actor. Rather, what the motion emphasized was the responsibility of students to collectively recognize the fact that violations of human rights and international law continue to take place in Palestine. Further, a second “be it resolved” asked that SSMU not only institutionalize a safe platform for open discussion, but also support student efforts to combat the marginalization of all groups on campus and elsewhere. However, instead of engaging in debate on the issues, the student body chose to postpone debate indefinitely.

SPHR would like to reaffirm that, regardless of opinion, the necessity of discussing socio-political issues within SSMU is indeed within its mandate. Citing Article VII of SSMU’s Equity Policy, SSMU VP External Affairs Amina Moustaqim-Barrette clarified: “SSMU’s constitution states that we should [take a stance on political affairs]. If you think that an issue is divisive or polarizing, that’s okay. The civil rights movement, same-sex marriage, South African apartheid – they were all divisive and polarizing at some point, too.” Moustaqim-Barrette’s support was clearly endorsed by countless attendees of the GA who, regardless of their stance on the motion itself, vocalized the complete unacceptability of suppressing its discussion.

Instead of engaging in debate on the issues, the student body chose to postpone debate indefinitely.

Even in light of cyber-intimidation tactics such as the deactivation of a “yes” campaigner’s Facebook page and the same-day disappearance of the “yes” campaign’s event page, many supporters continued to passionately voice their opinions and, importantly, hear the voices of those who disagreed with them. SPHR, along with other students who waited for over four hours to speak to the motion, finds it disgraceful that the student body chose to silence debate. Both sides were forced to continue along the path of mutual ignorance rather than expand horizons and share their own knowledge and experiences.

Let it be remembered that Wednesday’s GA was one of the largest in SSMU’s history. What could have been an opportunity for students to learn about and debate the Israeli-Palestinian conflict ended in censorship and a reinforced marginalization of voices already on the peripheries of the student body. This was due to a motion to postpone debate indefinitely, so that the substance of the main motion itself would not be discussed. On Wednesday, the GA, a space that gains its value from all students, regardless of political sympathies, was transformed into an arena that privileged just a few.

While an indefinite postponement of the motion is a loss for the Palestinian voices that are continually silenced in the public arena, SPHR refuses to consider this experience a defeat. We praise the exciting effect the mobilizing has had and will continue to have on our campus. It shows that students will not be silenced. Even the reaction to the very existence of the motion at the GA has left many who were previously ignorant of the Israeli-Palestinian conflict curious. In this sense, the intended purpose of the motion to spread awareness, even just to have the word “Palestine” on the lips of students, was fulfilled – with or without a Facebook page or a debate.

While an indefinite postponement of the motion is a loss for the Palestinian voices that are continually silenced in the public arena, SPHR refuses to consider this experience a defeat.

Not only do we see people having conversations about Palestinian human rights, a rare thing at McGill, but we see a clear expression of anger and frustration from nearly all students after the motion was postponed. We see a growing awareness that the campus has always been divided. There are those who wait, fight, raise their hands, then their voices to fight, and there are those who have the power to repress the efforts they do not agree with. This clear display of censorship is targeted only at a minority – at those who choose to raise awareness about how narratives are driven in a university that does little to shy away from Israeli institutions. Let it also be said, on this note, that we remain extremely supportive and proud of our friends at Demilitarize McGill whose work formed the backbone of the approved motion to expose and condemn military research at McGill and stand in solidarity with those negatively affected by it.

If undergraduate students do not want SSMU to provide a platform for voicing their opinions and learning from others in order to represent the student body as it was designed to do, it is our job as a unified campus collective that stands in solidarity with Palestinian human rights, along with other political solidarity collectives at McGill, to provide an alternative venue that allows our voices to be heard. We believe it is our duty as critical and passionate students not to dictate opinions to others on this issue, but to allow the student body to learn from each of its members, as opposed to sweeping important issues under the rug out of fear of discomfort or intimidation. Education, particularly alternative and critical education, is the main vehicle for combatting the ignorance and denial that continues to create injustices across the world. It is our job as students to not only seek out this knowledge, but to break the silence that has hidden it for so long.

SPHR McGill is a non-profit, student-based organization that advocates a strong social justice message to uphold the rights of the Palestinian people. To contact them, please email sphr.mcgill@gmail.com.