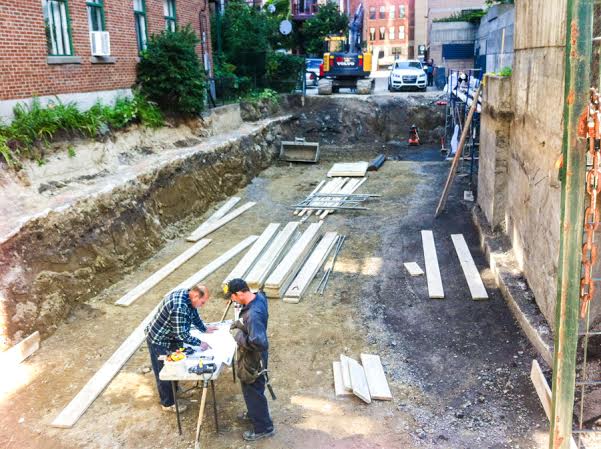 Having managed to stave it off for nearly two decades, residents of the Milton-Parc community saw the construction of a three-story condo begin on Monday on the recently-razed laneway garden known as Parc Oxygène. The owner of the green space sent bulldozers to destroy it on June 26, a few days after Superior Court Judge Gérard Dugré refused to grant a safeguard order to the Communauté Milton Parc (CMP) housing cooperative network to stop a condo developer from destroying the community’s garden and the City of Montreal from issuing a building permit to the condo developer.

“It’s like losing one of your lungs. It was a green space. It was living, breathing. [It] was alive,” Norman Nawrocki, a resident of the Milton-Parc community, told The Daily. “And the park was one of the rare places you could go to actually breathe fresher, cleaner, cooler air, and relax. So, we’ve lost a big thing, a big important park of our immediate community.”

Before being transformed into a green space in the 1990s, the 210-square-metre piece of land, stretching from Hutchison to Parc, was a small alleyway that taxi drivers and motorists used as a shortcut. Residents became concerned for the safety of their children playing in this alleyway. They eventually invested their own time and money into creating and maintaining a garden in the space, even after the privately-owned land had been sold to a condo developer in 2011.

Residents had since been tending to the garden until recently, on June 26, when the new owner sent bulldozers to destroy it and began a condo project on the land. The owner applied for a building permit in February 2013, which the City had planned to issue in June 2014. In addition, the Plateau Mont-Royal borough council approved the three-story condo project last February.

“[The City] favours developers. That was a political decision. It could’ve decided not to give a permit, to take a stand.”

In response, the CMP went to the Superior Court to seek a safeguard order that would prevent the City from issuing the construction permit. The CMP claimed long-standing servitude on the land, which protects the cooperative’s right of way to the space.

However, in his June 23 decision, Dugré rejected the CMP’s request for an injunction, concluding that the condo developer “clearly has the right to cut down and take off trees [on the land],” and that the CMP shouldn’t have waited until the City issued the building permit to invoke its servitude on the land in order to prevent development.

“The City knew we had a servitude, and it knew we had a park. It still gave the developer a permit, all the time saying, […] ‘We’d love to support you, but we can’t. We can’t be seen as taking sides,'” Nawrocki said to The Daily.

“[The City] gave him his permit and took a side. […It] favours developers. That was a political decision. It could’ve decided not to give a permit, to take a stand beside local residents and say, ‘Stop here, no more condos.’ This is just another greedy condo project. It’s not about the future. It’s not about hope, not about health, not about keeping the city green.”

The City could have preserved Parc Oxygène by buying off the property, but Alex Norris, the city councillor for the Jeanne-Mance district in Plateau-Mont-Royal, told The Daily that financial considerations prevented it from doing so.

Norris specifically pointed to the Coderre administration, budgetary cuts, and the cost of the lot as barriers to the park’s preservation.

“Obviously, our first choice has always been to keep that space green,” he said. “[But] we determined that we didn’t have the means. We couldn’t justify shelling out half a million dollars to [purchase it].”

However, Christine Gosselin, borough councillor for the Jeanne-Mance district, added that the money needed to purchase the green space could be used more efficiently in other areas.

“With that budget, we could green twenty alleyways,” she told The Daily in French. “We can green three alleyways per year, so we would not have been able to green alleyways for five years.”

At a monthly borough council meeting this Monday, Gosselin proposed to begin greening a nearby alleyway between Prince-Arthur and des Pins as compensation for having lost Parc Oxygène.

“It is 800 square metres. […] It is almost five times the size [of Parc Oxygène], in exchange for the lost green space, if the community desires,” Gosselin said.

Nawrocki, however, was not satisfied with Gosselin’s proposal. “Go ahead! Green it. I mean, you want me to get excited on that? It’s never going to replace Parc Oxygène,” he said.

CMP president Alanna Dow told The Daily that, for the time being, the board of the CMP has chosen not to appeal the decision.

“We could have appealed the fact that the judge didn’t allow the safeguard order. But we’re saying that at this point, we’re not appealing,” said Dow. “We have to pay the court cost for [each lawyer], […] because otherwise, if we try to negotiate not paying court fees, that is essentially a settlement in which [the City and the developer] will absolutely insist that we renounce all [our] rights.”

“The park represented hope for the future,” added Nawrocki. “To fight off developers for 25 years, and [to] maintain a park totally through voluntary labour for 25 years, that was a sign of hope…that yes, we can fight. We’ve lost this particular battle for the moment, it seems.”