What Makes a ‘Real’ Boy?

The Implications of Obedience in Guillermo del Toro’s Fascist Pinocchio 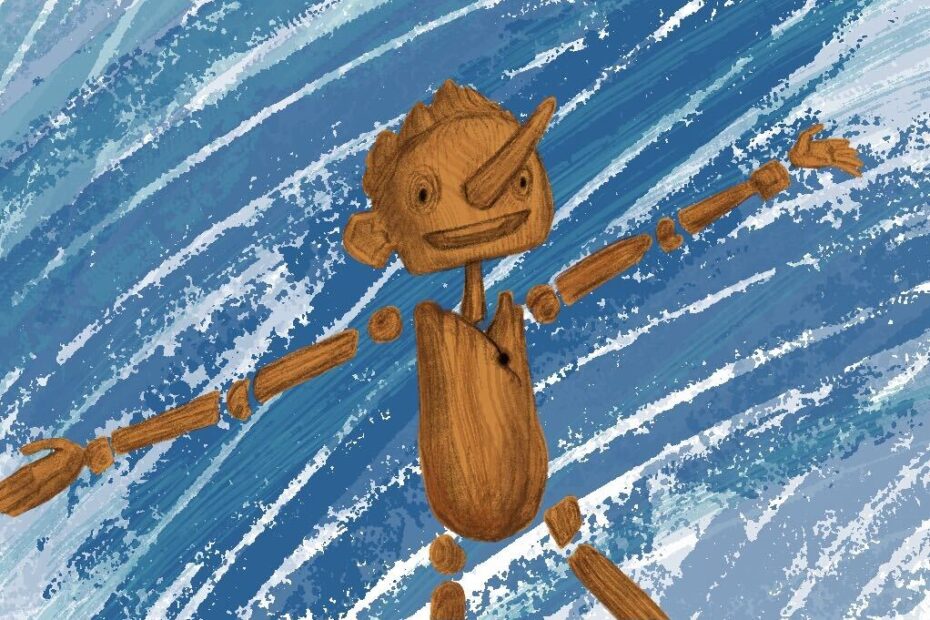 ​​Most of us were probably introduced to the charming wooden boy with an extendable nose in Walt Disney’s 1940 animated classic. A lonely old woodcarver wishes on a star for one of his puppets to come to life and the ensuing trials and tribulations that await Pinocchio determine his fate. If this puppet, Pinocchio, follows the rules, listens to his father, and behaves as a good boy should, he will be rewarded with a body of flesh and blood. Should he misbehave, his limbs will remain wooden and stiff forever. This version of Carlo Collodi’s 1883 children’s tale follows the original didactic tone to a tee. Obedient children are rewarded while rebellious children are punished.

Guillermo del Toro’s 2022 Pinocchio turns this moral on its head. The opening scenes revealing the idyllic Italian countryside are marred by uniformed Podestà roaming the streets. Swooping aerial shots of antique buildings and ancient Roman ruins are peppered with propaganda posters. This adaptation of Pinocchio does not take place in a distant, faraway land of fairy tales; it is grounded in the chilling reality of fascist Italy in the 1930s and ’40s. Del Toro’s decision to anchor Pinocchio in this setting changes the message and tone of the entire story. For how can we celebrate the original moral of obedience in a world defined by authoritarianism?

Del Toro casts a shroud of doubt over the tradition of rewarding “good” children and punishing “bad” children. His Pinocchio behaves much in the same way as his Disney and literary counterpart: boisterously handling Gepetto’s belongings, running away from school, and prioritizing fun and play over obeying the will of adults. Traditional iterations of this story frame Pinocchio’s actions as reprehensible and his selfish, childlike urges as something that he must overcome. Del Toro’s tale paints Pinocchio in a different light: in an interview with the BBC, del Toro stated, “I really wanted to make a disobedient Pinocchio, and make disobedience a virtue.”

In a world under the influence of surveillance, violence, and compulsory loyalty, Pinocchio’s naïvety provides a breath of fresh air. Del Toro highlights this positive take on Pinocchio’s “flaws” through juxtaposition with the Podestà’s son, Candlewick. The two boys are set up as foils of one another, as Candlewick desperately attempts to become the perfect, obedient Italian soldier at every turn, while Pinocchio marches to the beat of his own drum and only follows the rules he deems most appealing. If the moral of Carlo Collodi’s original tale were applied to the pair, one would assume that Candlewick, the obedient boy, should be rewarded, while Pinocchio, the naughty boy, should be punished. Yet in one of Pinocchio’s most heartbreaking scenes, the fates of the boys are reversed. Despite his tireless adherence to the rules, Candlewick wins the approval of neither his father nor his nation, and dies a pointless death in an Allied air strike. Pinocchio survives.

What did del Toro intend with this storyline? In his BBC interview, del Toro speaks on his goal to celebrate Pinocchio’s childish nature: “I wanted everybody to change but him. As the movie progresses, the cricket learns from Pinocchio, and Pinocchio learns very little from the cricket. I was being contrarian in a way, but it was more truthful to what I felt as a kid. I felt all this domestication was daunting and scary.”

Perhaps the most disturbing representation of such domestication is Pinocchio’s forced indoctrination into fascism. After the puppetmaster Count Volpe learns of Pinocchio’s desire to be seen as a “good” boy by Gepetto, he forces Pinocchio to perform skits propagandizing Mussolini’s regime. Volpe and the Podestà both interpret the rigid indestructability of Pinocchio’s wooden frame as emblematic of Italy’s nationalist persona. When the Podestà recruits Pinocchio into the military, it is with the assumption that he will be the perfect soldier. No matter how many times Pinocchio is killed in battle, his wooden body will always reanimate.

Although the adults of del Toro’s world attempt to morph Pinocchio’s inner self into one that mirrors the ideology they have imposed on his outer self, Pinocchio’s rebellious spirit cannot be broken. Instead, del Toro frames the pressure to acquiesce to the wishes of adults as a stifling, oppressive force. In this Pinocchio, the concept of obedience is magnified to a national scale to the point where it is made equivalent to the mindless cruelty of fascism. This theme is not isolated in del Toro’s repertoire. His other two most critically acclaimed works, Pan’s Labyrinth (2006) and The Shape of Water (2017) both feature main characters defined by their childlike innocence whose free spirits are stifled at the hands of fascist forces.

Del Toro’s films frequently grapple with what it means to be truly alive. In Pinocchio, he equates being alive with being childlike. Pinocchio is not granted life because he rejects disobedience but because he embraces it. The stop-motion medium of the film adds to this idea that life begins where rules lose their power. The impossible movements of the puppets, the sheer breadth of their expressions, and the exaggerated lines of their character designs create a world that resembles our own – but with a fantastical twist. Viewers are encouraged to strip away their ideas of the rules and laws that govern our world and instead immerse themselves in a setting as boundless and disobedient as Pinocchio himself.

In an interview with Polygon, del Toro explains, “The first idea I had when I was a kid was to do it in stop-motion, because I thought that way, the humans and [Pinocchio] exist in the same world. The most difficult element of design to solve in a Pinocchio movie is that Pinocchio and the humans need to feel like they belong in the same universe, and of course, the stop-motion solves everything.” This choice of medium requires that all the puppets, even the ones representing humans, be given life by the animators. The very making of the film mirrors the journey of the wooden boy himself. As a result, del Toro creates a world that visually equalizes all the characters, thereby drawing attention to the personal qualities that set Pinocchio apart rather than his physical differences. One of the most heart-wrenching scenes occurs when Pinocchio compares himself to the wooden crucifix that adorns the town church. Pinocchio gazes into the eyes of the audiences both inside and outside the film and asks, “He’s made of wood, too. Why does everyone like him, not me?”

The crux of del Toro’s Pinocchio centres on the question of whether or not it is always right to teach children obedience. Carlo Collodi’s original tale and Walt Disney’s famous adaptation both indicate that this is the case. Good, obedient children are rewarded while bad, disobedient children are punished. The very transformation of Pinocchio from a wooden puppet to a real boy hinges on this moral. By positioning the story of Pinocchio in the midst of fascist Italy, however, del Toro pushes the concept of obedience to its extreme. In this version, Pinocchio cannot achieve life by following the rules and being a good boy. In del Toro’s story, to be curious about the world, to play without abandon, and to indulge in childish desires is to be truly alive. That is what makes a “real” boy.