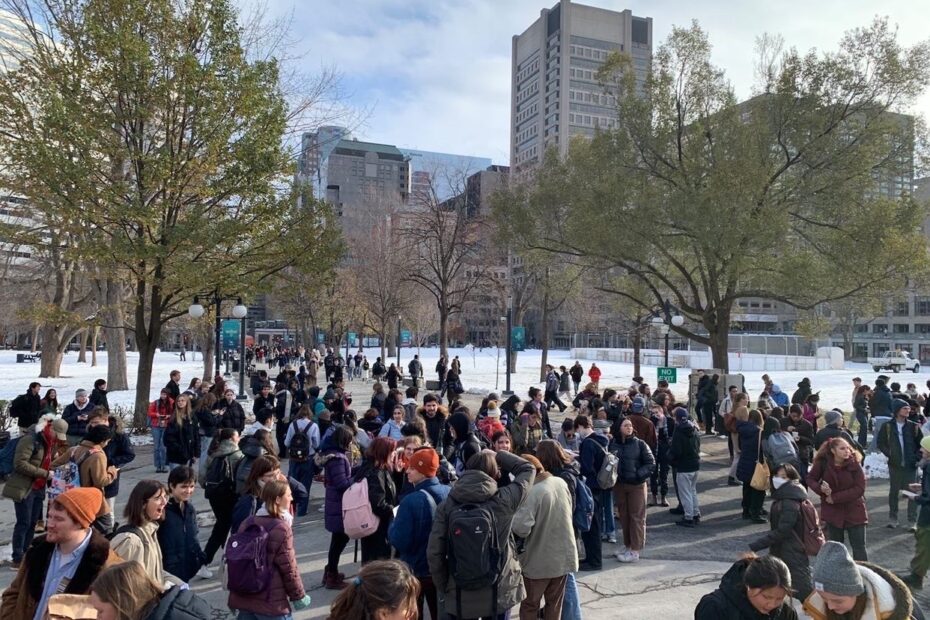 In the minutes leading up to 1:00 PM last Thursday – a crisp, clear, pre-finals November afternoon – Divest McGill organizers passed out flyers at the Y-intersection to invite those passing by to take part in the upcoming “one-minute scream.” “Celebration” by Kool & the Gang blared through speakers as Divest organizers counted down: “T-10 minutes until the scream!” “T-5 minutes until the scream!” and eventually, “T-1 minute!”

As 1:00 PM grew nearer, over a hundred students gathered at  the intersection. Counting down from three, Divest organizers prompted everyone to scream. The cacophony of anger that emanated from the centre of campus ensued for one whole minute, expressing the crowd’s exasperation toward grievances like the McGill administration’s climate inaction, finals stress, and general frustration. At 1:01, the screaming ceased and students dispersed to head back to class, go to the library, or otherwise continue on with their day.

“We wanted to […] get people to just kind of vent out their grievances with the university,” Carley, a member of Divest McGill, told the Daily, “whether it be related to climate justice or divestment, or unpaid student internships, or the extremely high cost of living or food on campus, the undemocratic student bodies, literally anything that you’re mad about.”

The collective scream is distinct from other actions organized by Divest, such as the #OccupyMcGill occupation of the McCall MacBain Arts Building last winter which lasted almost two weeks. Carley explained that that action was particularly “risky,” able to be done because of the privilege afforded to many Divest McGill members. “We’re trying to have a diversity of actions, that […] students, staff, faculty, anyone can really join,” says Carley. She explained that the scream served as a way to engage as many students as possible through a “really easy action” to get involved in.

She also added that the scream served as a reminder to McGill’s administration that Divest is still calling for divestment, 10 years after the creation of the organization. She explained that the scream was effective in “reminding [the Board of Governors] that we’re still here after ten years, despite their PR campaigns trying to prove us wrong. We still believe in this, and many other people do.”

In her opinion, the event had great turnout, garnering over 1,000 likes on their Instagram post promoting it. “Having these accessible events […] that you can repost online, no matter your status, is really important to create a movement that is serving the people that it’s impacting the most.”