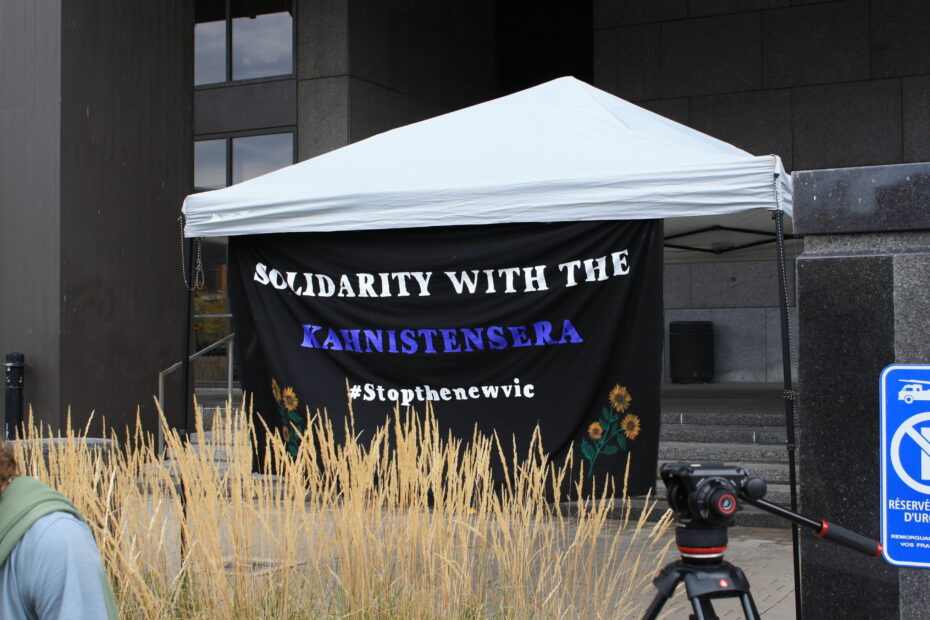 On October 27 and 28, the Mohawk Mothers went to court against numerous defendants, including McGill University and the Société Québécoise des infrastructures (SQI), to demand an interlocutory injunction on McGill’s “New Vic” project. This interlocutory injunction, granted by Justice Gregory Moore, will halt any further excavations on the Royal Victoria Hospital site.

The Mohawk Mothers have requested a delay in the start of the project because they believe that the site contains unmarked graves of Indigenous children brought to the Royal Victoria Hospital for unethical medical experiments, including the MK-Ultra mind control experiments conducted in the 1960s. Lana Ponting, who was sent to the Allan Memorial Institute in 1958, testified to seeing experiments performed on Indigenous children and believed that bodies were buried on the grounds. She added that many survivors of these experiments and their family members support the Mohawk Mothers’ request for a complete investigation of the grounds. Despite telling the Mothers that they would not start work until “information meetings” were completed, McGill’s hired firm, Arkéos, started excavations during the week of October 11.

The goal of the Mohawk Mothers is justice for the wrongs committed against their families and community. “All the different things that were done [to our children], we have a lot of evidence of that,” said Kahentinetha, one of the Mohawk Mothers, in an interview with the Daily. “The main reason why we do this is for them.” She adds that it was not just Indigenous children experimented on but other groups as well, notably the Duplessis orphans.

The Mothers’ opening statement, delivered by Kahentinetha and Kwetiio, outlined many of the abuses that occurred in the Royal Victoria Hospital, indicating the likelihood  of unmarked graves on the site. They  explained that McGill was built on the site of a precolonial Iroquois village, alluding to the possibility of further graves from that era. They don’t trust McGill to conduct a thorough and objective investigation that would respect the remains of their families. The Mohawk Mothers have been aware of the possibility of graves for years; Kahentinetha told the Daily about her previous attempts to confront McGill about their use of the land, including filing a seizure against them in 2015 to which she received no response.

“I wanted to know why these things are being done on our land. There are certain things that have to be followed and one of them is that you have to ask for our permission,” she explained. “You [McGill] insist it’s ours, so why are you doing all these things, digging, and tearing this down and that down, and rebuilding all of Montreal?”

Initially, the Mohawk Mothers did not want to go to court to stop the New Vic Project. “As it’s been demonstrated in court, the other means had been exhausted,” said Phillippe Blouin, an anthropologist and interpreter for the Mohawk Mothers who also researched evidence of graves on the site. According to Blouin, the Mohawk Mothers gave a presentation to the Office de consultation publique de Montréal (OCPM) and reached out to the Minister of Culture and Communications and the City of Montreal to express their concerns about the project. When all of these avenues failed, they decided to turn to the courts as a last resort.

The lawyer representing McGill argued that it was necessary to “trust McGill” to conduct an archaeological investigation. However, the Mohawk Mothers reported that McGill and the other defendants were uncooperative when arranging to meet with them and hesitant to provide records to help with their investigation. The few records provided were written in French, a language that many of the Mohawk Mothers don’t speak; this raised accessibility issues and added the extra costs of using an interpreter. When attending a consultation in Kahnawake, the organizers  called the police on two Mohawk Mothers who questioned the claim that the Royal Victoria Hospital site was of no archaeological significance. Although McGill claims to have consulted Indigenous stakeholders, the Mothers argued that it was mainly through band councils, which they describe as a “ward of the state [that] has been largely imposed on Kahnawake.”

However, in an interview with Kahnawake community newspaper The Eastern Door, Mohawk Council of Kahnawake (MCK) chief Ross Montour said that they are trying to stay out of this conflict. “It shouldn’t be presented out there that we approved the project,” he said.

Judge Moore’s verdict, published on Mohawk Nation News, ruled that the Mohawk Mothers and the defendants must work together to devise an appropriate archaeological plan before any further excavations can take place. These discussions will unfold using the process of the longhouse in accordance with the Great Law of Peace. When asked for comment by the Daily, the McGill Media Relations Office said they would “engage in a conversation with the plaintiffs with humility and in good faith.”

The Mohawk Mothers’ case generated a lot of public interest, evidenced by numerous solidarity actions leading up to the hearing. When speaking with the Daily, Kahentinetha expressed gratitude to the McGill students who stood with the Mothers.

When the hearing began on October 27, the small courtroom was so packed that people were sitting on the floor, with many others joining virtually through Microsoft Teams. There was also a rally organized outside the Palais de Justice by Divest McGill in support of the Mohawk Mothers. In the days leading up to the hearing, Divest McGill organized events to raise awareness about the case and its historical context for McGill’s student body. “This is especially important because McGill’s strategy … has been to sweep things under the rug,” said Divest McGill organizer Maya Garfinkel in an interview with the Daily. “In order to combat that strategy of erasure, we need to do the opposite, we need to raise awareness and bring people into the fold who may not be aware of what’s happening otherwise.”

“I was struck by the mentions of student activism and student voices, even within the courtroom,” said Garfinkel. “The Mohawk Mothers were able to leverage the fact that many students had spoken out against the issue … making it clear that although McGill argues that New Vic excavation was for the good of the public interest, in actuality, there are many in McGill’s public, including in the student body, who oppose the way the project has been moving forward.”

Several elements of this case carry broader implications for the Canadian legal system itself. First of all, the Mothers refused to use a lawyer. “We won’t ever, ever let anyone represent us but ourselves,” said Kahentinetha, adding that in the longhouse, there are no lawyers and everyone is allowed to speak for themselves. She said that after this case, anyone who sees their rights being infringed upon can “go to the court on their own, bring [a charge] into the court and use their own rights and their own laws that they use to deal with their situations.”

The case also brought attention to the limits of the legal system when dealing with unmarked graves. Julian Falconer, the lawyer for special interlocutor Kimberly Murray, repeatedly emphasized these limitations during his statement, arguing that colonial courts are not designed to resolve these kinds of issues. Murray has recently been appointed Independent Special Interlocutor for Missing Children and Unmarked Graves, tasked with creating a new legal framework for dealing with unmarked graves. In an interview with CBC, she said that this would be a very significant case for the whole country, as the decision “expresses the importance of taking the time of talking to each other … so that we don’t continue to have these disputes moving forward.”

“Divest McGill is extremely proud to stand in solidarity with the Mohawk Mothers after this tremendous win that we witnessed,” said Garfinkel. “The importance of this win cannot be understated. Of course, it is only a first step, this is not the end of this story, nor did anyone expect it to be.”

Additionally, Garfinkel pointed out how the Mohawk Mothers’ case is linked to Divest McGill’s fight for climate justice. “In order to achieve true climate justice, there must be Indigenous sovereignty and decolonization alongside it,” they explained. “In fact, those processes are integral to one another.”

Kahentinetha agreed. “Everybody will eventually one day understand that it’ll be good for everybody. It’s the Great Peace, and it’s meant for the whole world, not just meant for us.”