The Future of Hotel-Dieu 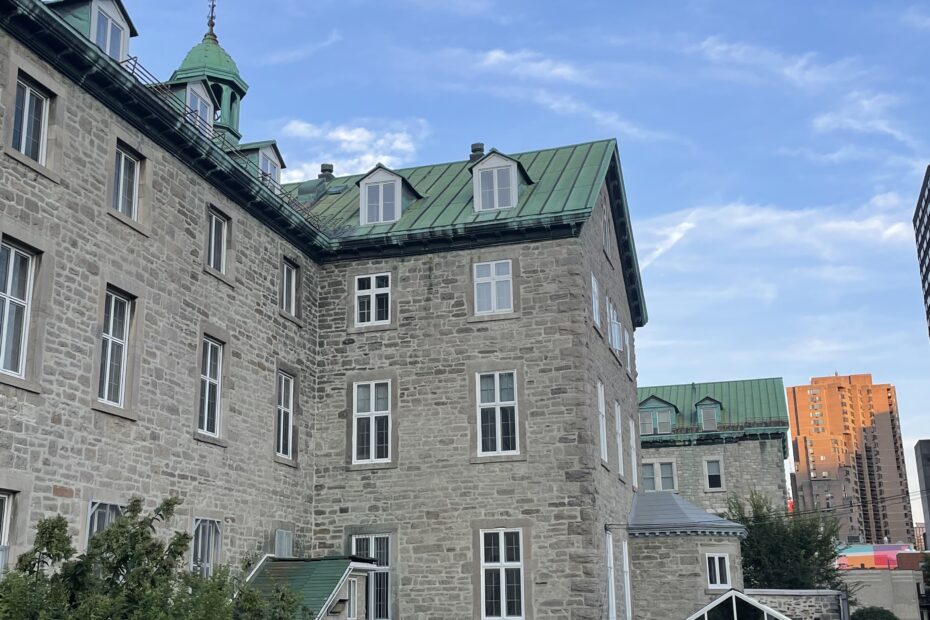 On September 15, Plateau-Mont Royal and Milton-Parc residents gathered at a public assembly to discuss the fate of the Hôtel Dieu de Montréal site, located between Duluth, Pins, Parc and Saint-Urbain. The hospital was decommissioned for in-patient care in 2017 following the downtown opening of the University of Montreal Health Center (CHUM). The Saint-Urbain Community (SCU), a coalition composed of 60 community groups and citizens of the area surrounding the former hospital, has proposed a housing project be constructed on the site. The project offers a solution to the “critical need for social housing” in the Plateau, per their website, and aims to create an inclusive environment for families, unhoused people, elders, and students. The plan also includes outdoor community spaces, local shops, studio spaces for artists, and one pavilion will continue to offer health services.

At the public assembly, community members had the opportunity to hear from candidates on how their platform will support the proposed redevelopment. Candidates in attendance were Ruba Ghazal of Quebec Solidaire, Jennifer Maccarone of the Quebec Liberal Party, and Chantal Rouleau of CAQ.

The Daily spoke with SCU president Dimitrios Roussopoulos to gain more insight about the project’s conception and future.

Roussopoulos explained that the Quebec government, “in its misguided sense of priorities,” decided to merge, and subsequently close, a number of major hospitals in Montreal in order to build two “super- hospitals” – the French-language hospital CHUM in south east Montreal, and the McGill University Health Centre in lower Westmount/Notre-Dame-de-Grace. The construction for CHUM began in 2010, and in 2013 the Ministry of Health and Social Services (MSSS) announced the “surplus” status of Hôtel-Dieu. The merger would consolidate resources and medical equipment with the goal of ultimately better serving the health system. But the decision sparked backlash from Montreal residents, according to Roussopolous, on the basis of long wait times in emergency rooms across Quebec, and 41 fewer spaces at the new CHUM. Hôtel-Dieu and the Royal Victoria Hospital, along with five other hospitals, were subsequently closed.

In 2017, the Sisters of Saint Joseph – the religious order which served the Hôtel-Dieu before health services were managed under the MSSS – sold 400,000 square meters of this land, apart from one pavilion, to the City of Montreal. The SCU was then able to present their initial proposal to CHUM management. The closed pavilions of the hospital were temporarily reopened in March 2020 to provide specialized clinics for COVID-19 patients, to offer COVID-19 testing, and to temporarily function as a shelter for unhoused people.

Roussopolous says, “there were three major pavilions that were abandoned and this huge parking lot. And so people in the Milton-Parc neighborhood […] were concerned not only about the future of all this space, but also the urgent need for more social housing.”

According to Roussopolous, the initial coalition was formed in 2013 by Lucia Kowaluk, an important activist in the Milton-Parc community. It “[consisted] of various housing groups which eventually took on the task of putting forward both a vision and an architectural plan [sic] to turn the abandoned pavilions and the parking lot into a major social housing project.”

The Daily asked Roussopolous what’s necessary in terms of government policy and financial support  to move forward: “what is needed is for […] the provincial Ministry of Health to do what it announced that it wanted to do, namely to give all of this space and these pavilions to the City of Montreal.” Although the City of Montreal is interested in assuming control over the site, there remains a political deadlock between the provincial and municipal government, per Roussopolous. Until a development plan is put into effect, the City requires money “from the provincial government to maintain the empty buildings over two or three winters,” which includes heating and electricity. Although the CAQ  had issued a statement before the last election that they would collaborate with the SCU to realize the project, Roussopolous describes the CAQ as “dragging its heels.”

Considering the number of students who live in the Plateau, Roussopolous spoke on what McGill students can do to aid the project, stressing the importance of public exposure.

“The attention of McGill students and their participation in creating a campaign of public pressure, either through your student council or through your media tools that you have on campus, is extremely important. The students have to show that they’re interested in helping, not just interested in benefiting from the eventual success of the project,” stated Roussopolous. Making more people aware about such an opportunity for public housing, and putting public pressure on the government and the MSSS to come toward an agreement is crucial for the project to move forward. He pointed to the Milton-Parc project, which started in 1968 and finally succeeded by 1980 – “with the support of a lot of people, including McGill students, we succeeded to create the largest non profit cooperative housing project on a land trust in North America and thousands of people benefit from it. So again, it takes that kind of collaboration and support.”