On the found footage technique 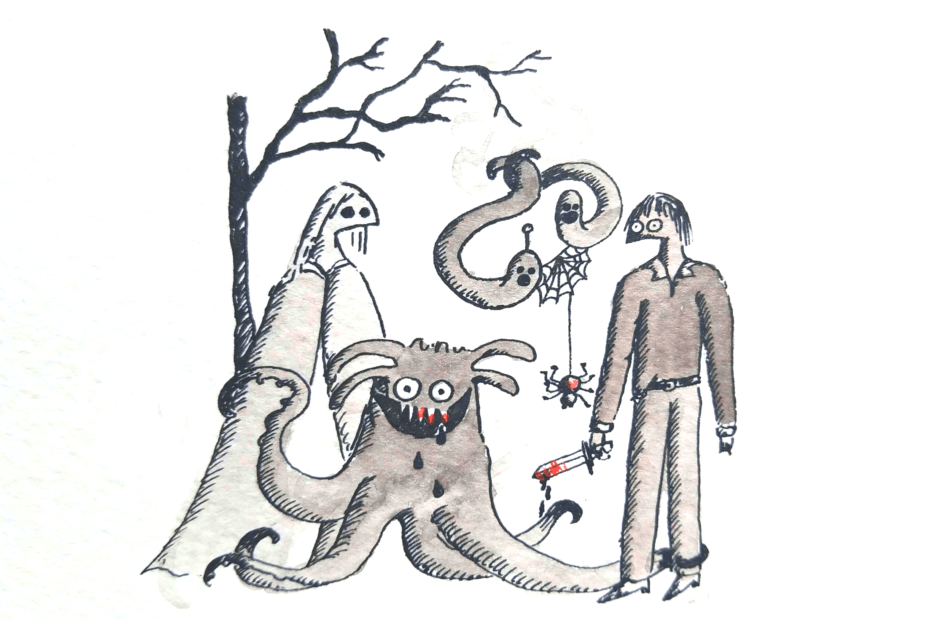 Horror films are notorious for having conventions so endemic to them that they cross into the realm of sigh-inducing cliches. Deserted manors, extreme weather, and the dreaded staple of jump scares, collectively form the typical horror film, watched and forgotten within the span of hours. It is thus a breath of fresh air when a movie introduces an unattempted mode of expression, unequivocally transforming an entire category of film into something worth watching, or rewatching, this fall.

The Blair Witch Project was cinematically released in 1999, immediately taking audiences by storm for its chilling experience. It follows the story of three film students who travel to the Black Hills – a forest near Burkittsville, Maryland – to film a documentary about the Blair Witch. The legend goes that a woman by the name of Elly Kedward was accused of being involved in witchcraft, hence banished from the town of Blair. Her curse has never left the town, resulting in countless tragedies among residents and visitors. The students interview local villagers and record terrifying testimonies about the Witch on their camera, along with their own experiences in the woods. The three, however, eventually disappear, their camera’s contents and equipment being found a year later.

Sound familiar? Although it’s become a cliche in itself as of today, the found-footage technique in horror was groundbreaking at the time. The concept of perceiving the plot through a camera operated by characters within the film not only puts audiences in the middle of that scenario, but also helps them relate better to the characters in question. This creates a sense of uneasiness where you want to escape the situation as much as the characters do, for you become part of the plot. You become the fourth film student, experiencing the legend of the Blair Witch as another character in the movie. Unnamed, unacknowledged, and unaffected, but a character nonetheless.

Moreover, the fact that the footage is labelled as having been “found” raises additional questions. What ultimately happened to the students? Why was it “found” and not “submitted?” Why was the camera left untouched? Inquiries like these shape the movie, but the answers are never delivered. It’s a slow burn technique which keeps audiences engaged. The viewer is also never introduced to the Blair Witch herself, instead having to imagine their own interpretation of what this mysterious figure might look like. You are forced to deal with a long, dreadful build-up of horror and suspense, which will make you recoil in your seat during even a slow-paced scene.

The hand-held H18s and 16mm camera used in shooting the film have a distinctive quality of their own. This movie, we are constantly reminded, is being shot by amateur film students. Since they have not perfected cinematography, spacing, lighting, or stabilizing the camera, the results form a choppy, shaky medium of delivery. Their attempts to uphold a more professional touch to their documentary is lost as soon as the students realize that they are not simply listening to stories of the Blair Witch anymore, but are themselves experiencing one. As fear takes over, the group’s gradual interpersonal breakdown is characterized by increasingly hesitant shooting. The grainy quality of the recording adds to this effect; it’s obvious age disconnects the viewer for a moment, and makes them realize that the footage is old and only recently found, before the film pulls them back into this ghostly past.

Praise for The Blair Witch Project, however, does not discount the trope of portraying women as the deranged antagonist in horror, which needs to be addressed in order to continue enjoying the genre. The Blair Witch could be observed as being a villain without motive. No background is given to the reason behind her evil, nor is Elly Kedward’s character developed beyond witchcraft. This could be attributed to shallow characterization, wherein she lacks a complex and multifaceted personality. Moreover, it perpetuates the association of women to witchcraft, wherein they were believed to be “more prone to diabolical possession” and essentially “imperfect” following The Black Death. This led to real world consequences, such as the Salem Witch Trials. Had the townspeople, in their testimonies, provided a more in-depth description of the Blair Witch as a member of the town, the duality between her mortal and supernatural sides would have made her all the more terrifying. Although later installments to the franchise do provide a backstory to Elly Kedward, it does not have the same impact as it would have had her character been further emphasized upon right from the start.

The found-footage and camera techniques can be recreated, and have been recreated, in films to follow. However, what is an exceptionally marked quality of this movie is its marketing campaign, which blurred distinctions between reality and camerawork. Being a low-budget indie film with unconventional delivery, its success was not guaranteed. But when The Blair Witch Project was first introduced to the public in 1999, it sparked fear and confusion among audiences. It, for as long as the campaign lasted, made the genre of horror cross into our lives, the terror stemming from the notion that this could happen with any of us.

The movie was marketed through the official Blair Witch website, at a time when the internet had just started to take off in North America. It featured false news reports, newsreel interviews, and inquiries regarding the whereabouts of the three missing students. This kickstarted the first debates across the internet, on forums and discussion boards, regarding the validity of the story. There were factions on both sides, sparking inquiry into not just the truth of this film, but regarding the limits to which the genre of horror as a whole could be pushed. The legend of the Blair Witch, it seemed, had transformed people’s ideas about what could or could not actually happen when it comes to the supernatural.

The indie production house behind the film – Haxan Films – kept up the suspense surrounding the film and updated the website frequently. They posted photos supposedly released by the “Frederick County Sheriff’s Office,” created lore around the Blair Witch, and even explained their role in the entire situation – they had been hired by the missing students’ parents to edit the choppy clips into a film. Even the choice of actors was important – they were still unknown faces, so no one could tell if they were acting or if they had actually been in that situation. Soon, the legend of the Witch had escaped into a field of existence where it was not just a plotline in a horror movie anymore, but recognized and accepted mythology.

Today, the hype around a movie like The Blair Witch Project is difficult to recreate. Techniques it pioneered have seeped into horror film conventions to a degree that they do not have nearly the same impact as the original did. It was a one-time phenomenon that could only be experienced in absolution in that moment, in 1999, when you went and sat in the cinema hall, popcorn in hand, looking for answers to questions that had remained unanswered for months. Its impact on the genre of horror is immense, and therefore it remains, to this day, a Halloween staple, and in every sense of the phrase, “based on a true story.”