Anti-Homeless Architecture on the Rise 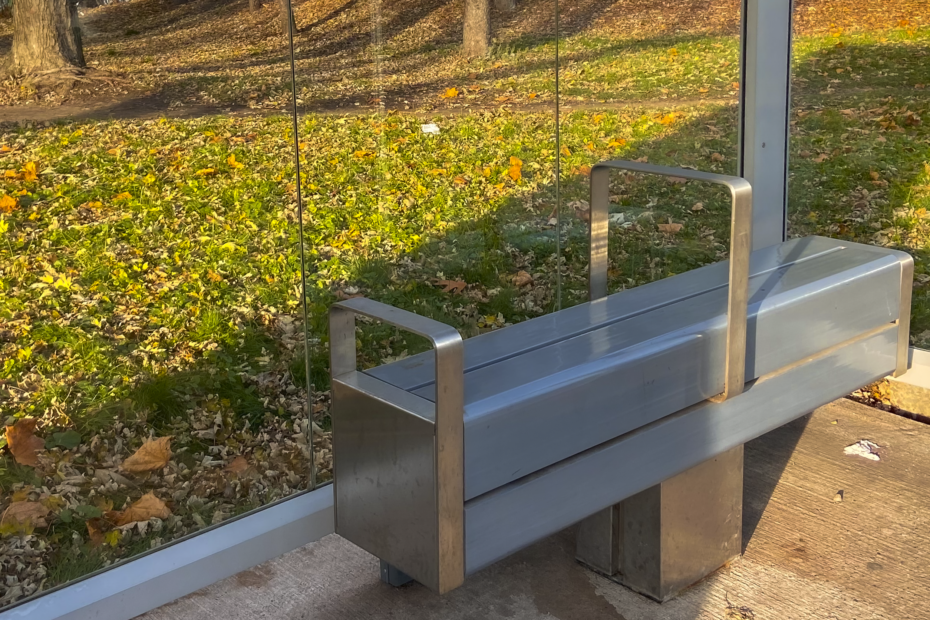 Days prior to the mayoral election, an access to information request filed by Ricochet revealed the removal of benches at Parc Azellus-Denis in the summer of 2019 to be a method of preventing unhoused people from gathering in the park. The benches were replaced by bike racks to accommodate the new residents of the increasingly gentrified Villeray-St-Michel -Parc-Extension neighborhood. Following what Plante dubs as “cohabitation,” the park redesign proposal was imagined to have benches for sitting only – the addition of arm rests prevent people from laying down, specifically harmful to unhoused people looking for a place to sleep or rest.

From 2020 to 2021, the average rents of a 4½ and 5½ in the area had increased by 17 per cent. Activists attribute this rise in rent prices to an influx of students into the neighborhood, following the establishment of the Université de Montréal MIL campus.

The architecturally hostile details of the proposed plan (some aspects never implemented) are revealed in email deliberations – translated into English by Ricochet – between Julie Gregoire, a municipal official responsible for community development, and a local property owner:

“Many colourful gardening / urban agriculture bins are found along your building to restrict people living in a homeless situation and prevent them from doing their business there, a guardrail would be welded all around the metal structure above the small wall at a height and at a strategic angle to prevent people in a situation of homelessness from sitting or lying down […] As an alternative, benches would be set up near the street for them. There would also be very large decorative rocks strategically placed in the most problematic places where you regularly find people or their feces.”

Plante’s model of social cohabitation, a phrase she’s employed many times, essentially refers to accommodating tourists and the new richer residents of gentrified neighborhoods, while doing the bare minimum to accommodate unhoused individuals, often in response to negative public opinion about anti-homeless initiatives. In August, she announced the pilot of the Mobile Mediation and Social Intervention Team, launched in Ville-Marie. Specifically targeted toward intervention to de-escalate potential conflicts in public space, the project is an attempt to take the responsibility of conflict mediation off SPVM, who do not receive specialized training in this area. The Parc Azellus-Denis bench removal was incited by 32 complaints to SPVM about unhoused people gathering and resting in the park. In an interview with Ricochet, David Chapman, director of Resilience Montreal, questions how realistic cohabitation really is if the innate response of new residents is to call the police on unhoused individuals interacting with public space. He says that ten years ago, it would not have been a problem “when someone who is homeless is sleeping on a bench.” The individual only becomes viewed as a problem “when you have a bunch of [expensive] condo developments move into the neighbourhood,” changing the makeup of the neighborhood, resulting in “people calling the police about that person sleeping.” Chapman further comments on the structure of government revenue collection, housing and taxation: “If you’re living in a wealthier area of the city […] your property taxes are a significant amount of money, and with that comes a certain sense of entitlement. People have a sensibility — ‘I’m entitled not to have to look at homeless people.’ The city will get a certain amount of pressure, because after all these are the people who are keeping the officials in business. […] So much of the bill for local infrastructure is being paid by these wealthier populations. And so yes, the pressure is to keep these populations happy and sometimes to go beyond what is socially responsible in order to keep them happy.”

Often referred to as “revitalization projects” by city officials, such hostile architecture has been popping up all over Montreal – not only making the city less hospitable for homeless populations, but also for people with disabilities and the elderly. In Toronto, examples include the absence of amenities that would allow people to stop and rest, such as picnic tables, public bathrooms, and comfortable benches. However, benches separated by more than one crowded armrests have been argued against by the City of Toronto to support accessibility by making upward and downward movement easier.

Cabot Square, long serving as an informal gathering place for Inuit and First Nations people, has also been a target of defensive architecture. The square’s downtown location near the St. Lawrence River has made it a prime spot for new real estate developments. So, it was no coincidence when hostile benches were installed in July 2020 – armrests separated the benches into individualized seating spaces, reading “repos 15 min,” or “rest 15 minutes.” Nakuset, director of the Native Women’s Shelter – located a few blocks away from the square – tweeted “no resting allowed at Cabot.” The negative public response lead Plante to have the benches removed a few days later.

In November of 2019, the Daily reported that “defensive design has moved faster through the Montreal metro stations than their trains do.” With many metro stations providing leaning bars to stand against in lieu of benches, Montreal is making sure that metro stations do not serve as a place of respite throughout the harsh winters. In February, despite the closing of many shelters and capacity restrictions as a result of the pandemic, STM boarded up a popular resting space for unhoused individuals at the Bonaventure metro station.

A previous version of this article incorrectly stated that Jennifer Hiseler of Accessibility Toronto argued against benches separated by several armrests. The article has been updated to be more accurate.