Mediating Bodies in the Metro 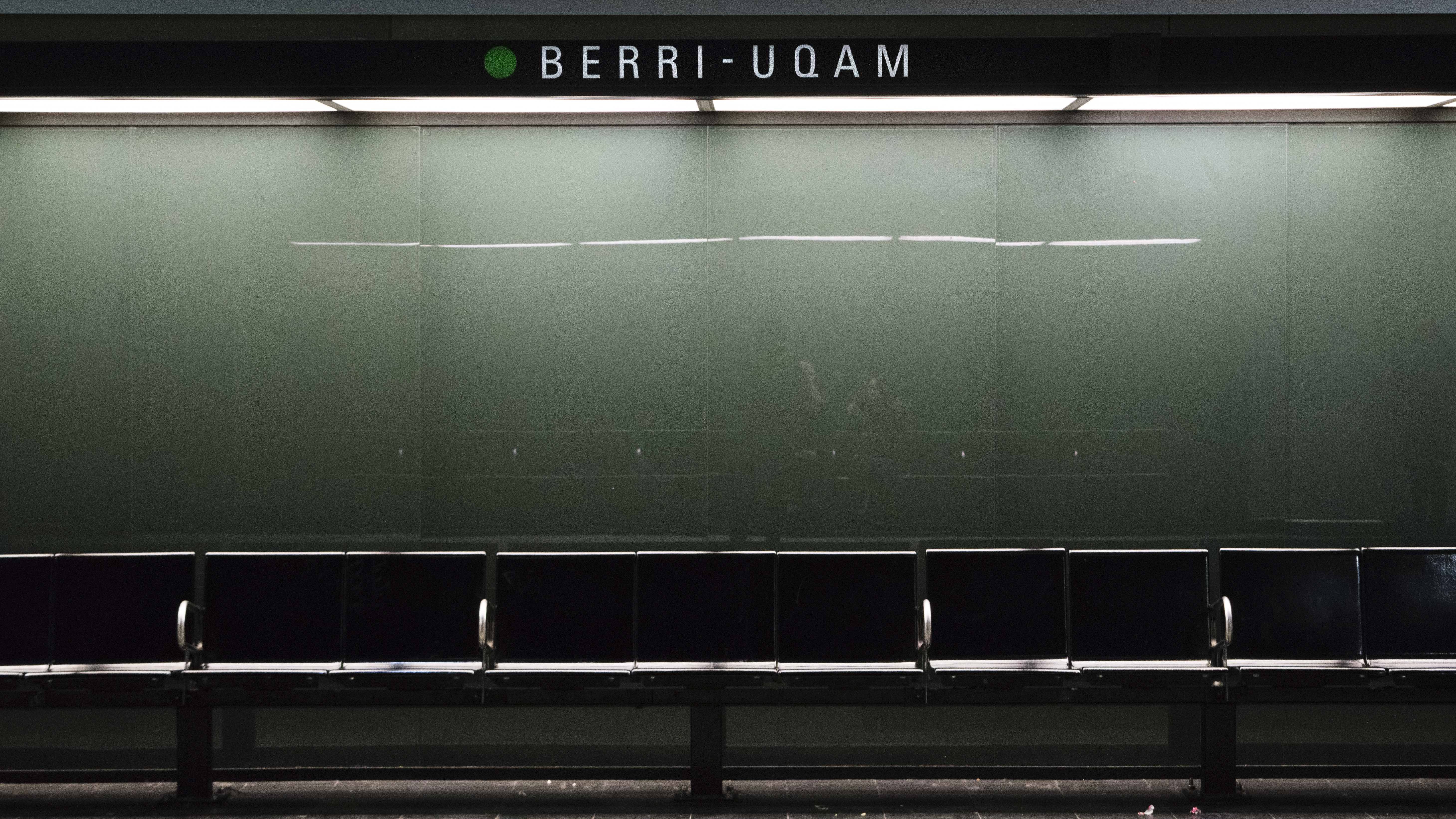 Waiting for the orange line metro at Berri- Uqam, there is not a single bench in sight. In fact, the only option is a leaning bar, which patrons can rest against, but not put their weight upon. This is defensive design, also known as hostile architecture, a form of mediating how bodies can use a space and limiting the ways in which public property can be used. Hostile architecture tends to go unquestioned, and frequently unnoticed: sidewalks covered in bumps to provide “traction,” or lampposts which encourage nightlife (and all the economic implications of that) are two rather benign examples. Hostile architecture can also be much more aggressive, with benches that have “armrests” in the middle and short backs, rendering sleeping impossible and sitting for a prolonged period of time uncomfortable; or spikes in alcoves for the sole purpose of keeping homeless people from sleeping there. It also includes sounds. Many businesses play music or strident, high pitched noises overnight for the sole purpose of discouraging people from sleeping nearby.

Hostile architecture can also be much more aggressive, with benches that have “armrests” in the middle and short backs, rendering sleeping impossible and sitting for a prolonged period of time uncomfortable.

Hostile architecture is designed with specific bodies and people in mind. It is by no means a “failed design;” it is a very successful plan to limit certain groups’ access to public spaces. Its negative impacts disproportionately affect people experiencing homelessness who rely on public spaces as refuge, and it makes navigating spaces more difficult for people with disabilities. It is not a new phenomenon, but it has started to garner some attention. As architect James Furzer puts it, “with the rise in homelessness, it becomes more noticeable when you see spikes in areas that people would be sleeping in.” 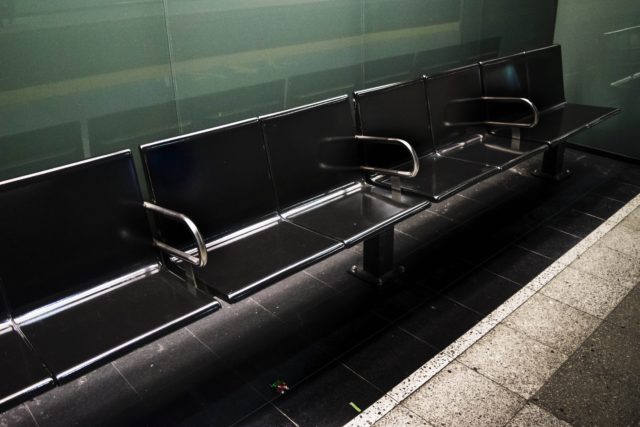 Defensive design is an overt, systematic, and deliberate decision to push certain groups out of public spaces. By using architectural designs to define who gets to use these spaces, and how, architects are further marginalizing groups who already facing discrimination. “If we’re looking for a solution to people experiencing homelessness, putting up a third railing on a bench so someone can’t take a nap in a park isn’t a solution to that problem,” says Jake Tobin Garrett, manager of policy and planning at Park People. Excluding certain groups from public spheres does nothing to acknowledge or combat structural inadequacies. By focusing on keeping people out of sight, decision-makers get to ignore housing problems and issues of income inequality.

The problem of defensive design is prominent in the city of Toronto, where people are being pushed out of both the housing market and public spaces. The Greater Toronto Area (GTA) is a victim of its success, with fewer housing options than people wanting to live in the region. Over the past decade, this has caused an inflation of the prices of housing – and limited opportunities for social housing to develop.

With limited housing options, a larger population is faced with the possibility of homelessness. Far from acknowledging these structural issues, instances of defensive design have multiplied in Toronto, effectively barring people from public spaces, leaving them more vulnerable to violence.

To bring attention to these issues, researcher and public space advocate Cara Chellew launched #defensiveTO. The project aims at mapping and photographing every instance of hostile architecture in the GTA. In slightly over a week, a dozen volunteers working on the project documented over a hundred instances of hostile design, proving the prevalence of this architecture.

It is by no means a “failed design;” it is a very successful plan to limit certain groups’ access to public spaces. 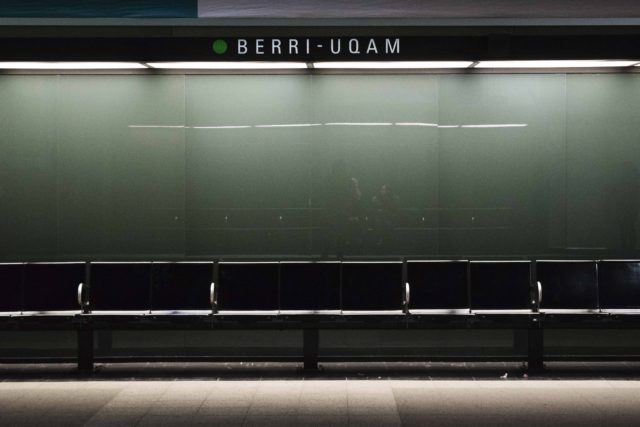 Unfortunately, Toronto is not the only city employing defensive design. Montreal similarly implements defensive design which is exponentially more harmful considering its harsher winters. The metro stations, much like some of the underground tunnels, are warmer and safer for people experiencing homelessness. During the long winters, these areas are used as a retreat, and are often the only places available for people experiencing homelessness. At the time of this article (mid-November 2019), many shelters are already struggling to provide adequate resources for everyone in need. Another challenge arises when trying to access these services: of the homeless shelters accessible across Montreal, only Open Door allows people who have used drugs and consumed alcohol to enter, and the first wet shelter in Montreal is not expected to open until spring 2020. Faced with this lack of resources, people experiencing homelessness are pushed into the streets, where spaces they could be (relatively) safe in are taken away through hostile architecture.

Unfortunately, defensive design has moved faster through the Montreal metro stations than their trains do.

Metro systems are particularly problematic when it comes to hostile architecture, and the reflection of who can use a public space. They play an important role in connecting various areas of the city, while also reflecting broad societal beliefs concerning what an “average” or “normal” body looks like. The architecture of metro systems around the world continuously marginalize people with disabilities. In Montreal, only 15 of the 73 stations are wheelchair accessible. In New York City, benches are being replaced with leaning bars, so people needing to rest have nowhere to sit. In Paris, benches are replaced with individual seats, which are spread apart, making it impossible for anyone to lie down and sleep. Because most people living in cities use public transportation to get around, these defensive design push “unwanted” bodies out of the public sphere, further alienating and isolating them.

Unfortunately, defensive design has moved faster through the Montreal metro stations than their trains do. An extension of the blue line of the metro was recently approved and is set to open in 2026. This will offer more convenience for commuters to travel safely, but could also bring more defensive design into the metro. Five new stations will be added to the line. These stations will be open to the public, but if defensive design is implemented, it would make these public spaces open only to specific types of people, therefore excluding homeless people and those who are seeking refuge.

Defensive design keeps people out of public transportation. This is unacceptable in a system which is so widely used and should be an inclusive and accessible space.

The first contract to design the stations was signed in November 2019, and preliminary drafts of the project are expected to be 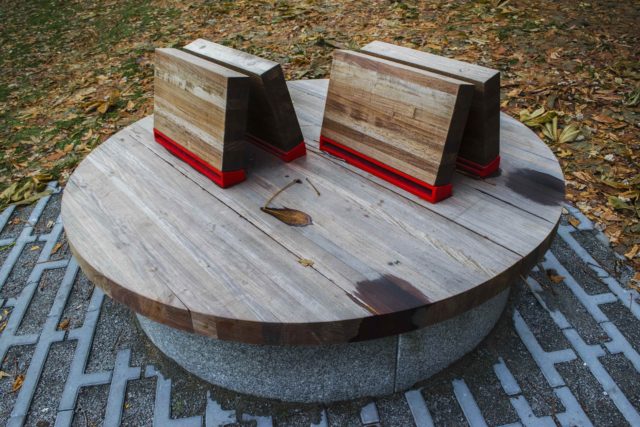 released by Spring 2020. Lemay Architecture, which currently has a contract to design Laval’s migrant detention centers, is among the companies designing these future stations. As the new architects begin planning and designing these new metro stations, they must strive to create inclusive public spaces and not include defensive design. We should be ready to challenge any plan that contributes to the marginalization of vulnerable groups.

Hostile architecture is not a solution to homelessness. It pushes people out of safe spaces, and refuses refuge and warmth for those who rely on public spaces for such. Homelessness is a problem that needs government, and local action to alleviate. It is an issue of systematic housing and income inequality, not of public space. People experiencing homelessness need shelters and places of refuge, they need to be allowed to use public spaces as members of the public, and not be pushed out by design.

City planners and the general public need to question who is invited to use public spaces – and who gets left out.

Defensive design makes spaces inaccessible and difficult to navigate. For many, including people in wheelchairs, or pushing strollers, the lack of elevators keeps them from safely entering the metro. For other people with disabilities, the unavailability of benches, or resting points makes waiting for a metro challenging. Defensive design keeps people out of public transportation. This is unacceptable in a system which is so widely used and should be an inclusive and accessible space.

Defensive design as a strategy keeps vulnerable and marginalized people out of public view but does not address any structural issues. People come before property, and while some new designs offer positive features, they largely aim to “protect public property.” City planners and the general public need to question who is invited to use public spaces – and who gets left out.

Shelters across Montreal are looking for both financial and volunteer support. Several ways in which you can contribute are listed at the bottom of The McGill Daily’s editorial “Sensitive Coverage, Accessible Support.”

This article is a part of our joint issue with Le Délit on Labour, Body, & Care. To read their pieces, visit delitfrancais.com