One year since release of the AP-ABR 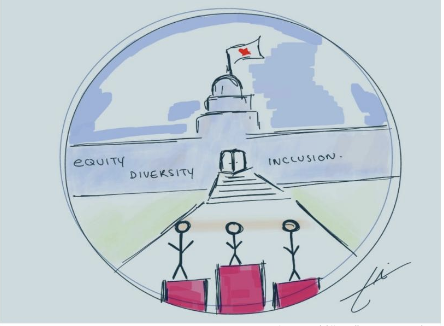 It has been over a year since Principal Suzanne Fortier announced the implementation of McGill’s Action Plan to Address Anti-Black Racism (AP-ABR), based on the Equity, Diversity and Inclusion Plan released in June of 2020. As the AP-ABR is only one year into its five-year trajectory, many objectives have yet to be completed – regardless, the university has maintained several of its commitments thus far. Associate Provost of Equity and Academic Policies Angela Campbell clarified, however, that the plan is only meant to be a starting point for the university: “this is going to be an ongoing effort […] as long as the [university] goes, there has to be a commitment,” she said during a student press conference.

Among the university’s completed objectives is the appointment of Professor Terri Givens as the Provost’s Academic Lead and Advisor (PALA) on the Action Plan. In her capacity as PALA, Givens will lead McGill’s efforts to hire more Black professors for tenure and tenure-track positions and “advise academic leaders (Deans, Chairs, Directors, and Associate Deans) about the distinct needs and experiences of Black faculty.” In this vein, McGill has designated 15 Black faculty members to be added to McGill’s tenure-track positions, according to documents sent to the Daily by McGill’s Media Relations Office. Givens commented that she would like to surpass McGill’s goal of having Black faculty make up 5 per cent of M-Level employees: “My goal is for McGill to become a beacon for people who are interested in the study of the African diaspora [and] Black studies.” The BSN has advocated for the creation of an Africana studies department in the past, but the University has not announced any intention to create a department specific to African diaspora.

The AP-ABR also included commitments specific to student experience. The university has succeeded in meeting their first goal in this category with the creation of a student census, which is available for all students to complete via Minerva.  Additionally, the university has been conducting monthly meetings with students from the McGill African Studies Society and the BSN to get student feedback on the progress of the AP-ABR, and revise accordingly.

To meet the mental health needs of Black students, the university has created two positions in the Wellness Hub. One of these positions has already been filled: a Local Wellness Advisor (LWA) with expertise in the psychological impacts of racism was hired in January of this year. Although the Wellness Hub has previously been criticized for difficulty in accessing mental health services, Campbell says that the Black Student Liaison has not raised concerns in regards to the accessibility of this LWA; McGill reports that the LWA has served 120 students thus far.

When asked about how students and staff would be held accountable to the anti-oppressive mandates of the EDI Plan, Campbell said that the first step in fostering an anti-oppressive culture is getting people to understand why microaggressions are harmful. “When [microaggressions] occur, the difficulty is often that […] the community dominant groups don’t often understand why they’re so harmful or painful,” she explained. The university is in the midst of educating professors and administration on the impacts of microaggressions, and the launch of the Office for Mediation and Reporting has created a channel for students to report discriminatory behaviour on campus. Last year, Provost Christopher Manfredi told the Daily that the Code of Student Conduct and Disciplinary Procedures would be a means of reducing anti-Black racism, claiming that most students experience microaggressions from other students. During this year’s press conference, Campbell instead emphasized a top-down approach to combating anti-Black racism which prioritizes educating faculty and administration.

These educational initiatives include the implementation of modules about anti-Black racism. While Campbell said that she does not expect modules to eliminate racism on campus by themselves, she said “it sends a message that it’s important and that we take the matter seriously. [The module] does not by itself achieve [an end to racism].” In discussing the modules, Campbell remarked that It Takes All of Us, McGill’s mandatory online module about sexual assault, has served as an example for other universities seeking to reduce sexual violence on campus. Likewise, Givens said that educational workshops and modules have seen good reception: “I’ve really been kind of overwhelmed with the positive approach that a lot of people are bringing to the workshops.” Campbell hopes that these workshops will encourage professors to adopt more inclusive curricula and pedagogies, another goal presented in the AP-ABR. She also hopes that the University will begin to consider how bias may impact an instructors’ student evaluations – Deans and Department Chairs refer to student evaluations when considering whether an instructor should be given a tenure-track position, so Campbell wants “to make sure that [instructors] aren’t penalized in a way that’s unjust on account of bias on the part of the students who do the work evaluating them.”

The AP-ABR stated that the university would reach a final decision about what to do with the statue of James McGill by the end of the bicentennial year. The Daily asked for clarification as to when the deadline for a decision would be, but the university employees present at the conference were not aware of the specific timeline for this decision. The statue has been removed from campus for the time being due to vandalism, but there is no final decision as of yet. The university has also not created a website to “showcase the presence and success of Black McGillians over time,” as was included in the AP-ABR; instead, the Bicentennial website is pointed to as a space for highlighting the history of Black students and staff at McGill.