Being Orbited by My Ex When the Stars No Longer Align 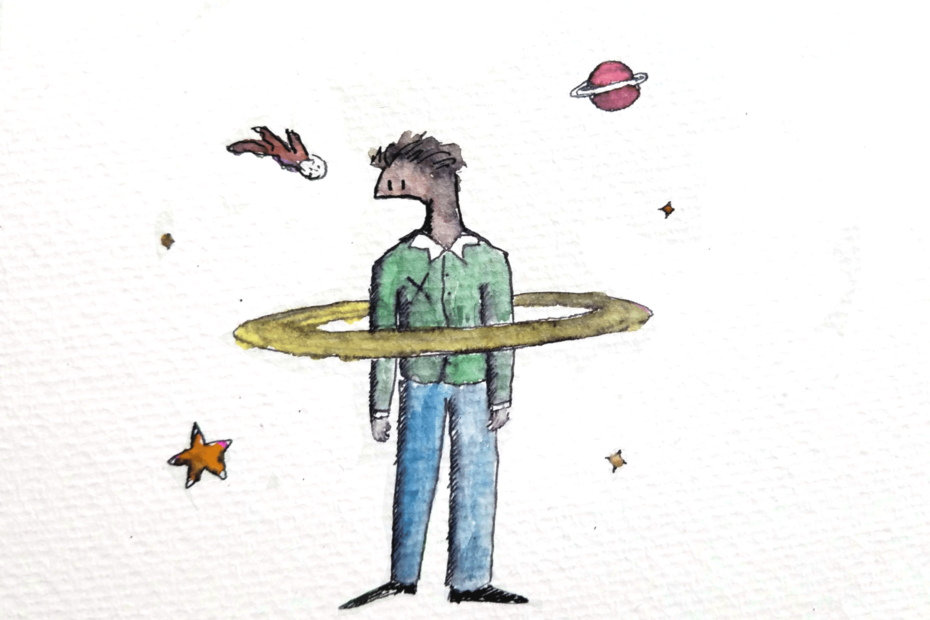 My breakup in 2017 was the main reason why I decided to vanish from social media. I did not wish to be reminded of the digital spaces of this “thing” which I am still not sure was a “relationship.” In truth, my ex and I never acknowledged this whole thing as a formal bond; it was in a perplexing grey zone, no matter how hard I tried to convince myself that I was in a “real relationship.”

The empirical spaces and memories of love were transposed onto screens of nostalgia, loving memories, and painful WhatsApp chat logs. In moments of despair and loneliness, I would find myself orbiting around all these sites of love and its aftermath. It took me a while to remove all the pictures of my ex and I and our text conversations.

I spent three years overcoming the heartbreak and tracing the root causes of why I had acted the way I did. My attachment style and the ways in which I express my feelings have more to do with how I was raised – lovingly and neglectfully. Hence, resolving my childhood traumas was a monumental task in my own therapeutic journey, leading to my vanquishing of self-hatred, my return to my roots and family, and eventually my coming to terms with my gender identity. I needed silence, both on social media and interactionally in real life, to eloquently evoke my healing journey.

Iovane defines “orbiting” as “close enough to see each other; far enough to never talk.”

Earlier this year, I came back onto Instagram with a new account to share my experience with transitioning and taming dysphoria, one weight plate at a time. In creating my own safe space I have found a profound sense of self-validation and self-confidence. Certainly, I still have many things that need improvement and certain things to get off my chest, but I have been feeling better in my own skin.

Nevertheless, I have been noticing a familiar username watching my stories from time to time over the past few months. We do not follow each other, and her account is private. She must have found me through the algorithm or through a friend of mine. The username would drop by my profile every three weeks to see what I was up to. Initially, I did not mind, because who has not “stalked” their ex on social media, whether covertly or overtly? At the first sight of the familiar username, I thought to myself “hmmm okay, maybe it’s just a single occurrence,” so I moved on with my day and put my focus elsewhere.

Yet, every now and then, the same username resurfaced and I started asking myself questions. There were feelings of surprise and confusion, and, as an academic, an urge to hypothesize and theorize human behaviours (scholarship can come from personal experiences, after all). Should I make my account private? Should I block the user? Why does she care after all these years? Why does she show up when the memories of her are just now sitting quietly in the drawers of my own personal historical archive? Why didn’t she show up when I was at my worst, drenched in substance abuse and on the verge of suicide three years ago? Why now and not then? How and where do ex-lovers draw their boundaries? What is the name for this behaviour? Even though I have a public social media account, have I ever consented to being “stalked?”

Professor Google offered me some interesting insights. I stumbled upon Anna Iovine’s 2018 Repeller article “Dating Trend: Orbiting Someone is the New Ghosting Someone,” which discusses the phenomenon of “orbiting.” The author recounted their experience with a romantic prospect who had stopped communication altogether after the second date, yet proceeded to watch every single Instagram and Snapchat story that they had posted. Iovine later found out that they were not the only one encountering this situation, but their friends, too, had gone through similar circumstances with social media. Iovine defines “orbiting” as “close enough to see each other; far enough to never talk.”

Indeed, social media creates a fertile ground for new modes of anthropological analyses and observations, as well as for a more nuanced study of human behaviours. Social media and social media interactions weave a series of interesting dialectics: distance and proximity, nostalgia and amnesia, accessibility and restriction.

There exist different hypotheses on why we orbit. Human behaviours cannot always be explained by “rationality,” for we are also emotional creatures; we experience emotions culturally in contact with other humans. There are feelings, feelings about feelings, about things, about people. Sometimes, we look back on our failed experiences and think about the “what ifs.” There is regret, there is gratitude, and maybe bitterness, too. It is natural to wonder about past romantic partners and fancy who they have become and how they have grown (or not). This is a valid mode of questioning and I am not against natural human curiosity and imagination. What bothers me is the passage from thoughts to actions; my ex has the audacity to type my Instagram username in the search bar and look me up.

Iovine came up with three hypotheses for the phenomenon of orbiting. The first is about making a power move, which is a subtle way for the orbiter to signal to the orbited that they are still around and consider the orbited a prospect to come back to, despite the lack of physical engagement in real life. The second hypothesis questions whether the orbiter is aware of the repercussions of their orbiting, which I say is the least applicable in my case, considering how technologically knowledgeable my ex and I both are. My ex probably knows that I know that she watched my stories. The last hypothesis relies on the “fear of missing out,” or FOMO, which has been entrenched by social media and interactions taking place in the digital realm. Social media embodies a labyrinth of spectacles that mediate human interactions through appearance and consumption, often leading us to unhealthy comparisons and ignoring class divisions and the visceral intrusion of capitalism into our private lives. As a tech-savvy, young person with social media accounts, I am undeniably guilty of letting FOMO take control of the steering wheel, by posting pictures of my workouts, food creations, rants, and by following other users and taking a glimpse into their curated digital portfolio.

I would like to add another hypothesis which focuses on coping mechanisms and finding closure. Perhaps orbiting is a way for my ex to deal with loss and engage with the dialectic of amnesia and nostalgia and her own politics of remembrance. We originally liked each other, after all, and went through different moments of mutual support, mutual respect, friendship, and companionship. To lose these important elements of human connection can engender a profound sense of loss of one’s identity and meaning of one’s existence. However, if this is the case, I hope my ex is receiving support to find ultimate closure and embark on new and meaningful relationships. I genuinely hope that she is doing well. I have chosen to prioritize my mental health, and hopefully she has chosen to value hers, too.

Admittedly, I used to wonder about my ex, especially in the immediate aftermath of the breakup. I have had my fair share of regret and bitterness; I did this first love wrong in so many ways. I was naive and too idealistic, I was communicating too much, yet never to the point. I turned my ex into an idea, instead of treating her like a person, and that was dehumanizing.

Eventually, I spent less time with the memories of her, and concentrated more on myself and my recovery. I stopped looking for her on social media and in text messages, and started looking within myself, looking for myself, looking at myself. Deleting social media accounts was a revolution that I did not know I needed, a courageous act of creating healthy boundaries. Shifting my perspective also entailed shifting my gaze from seeing only this person and the crumbled world which we had built together, to rebuilding myself and my foundations. But reading and writing about orbiting have made me reflect on the “relationship” dynamics between my ex and I. Scarily enough, it was the same dynamics in the aftermath of the breakup; because we were in the same classes, same department, same program, and wandering the same corridors and spaces, there was always a (false) sense of proximity. Yet, simultaneously, we were also drifting apart in our own mourning; she made new friends, whereas I was alone and crying on the bathroom floor.

I have had my fair share of regret and bitterness; I did this first love wrong in so many ways. […] I turned my ex into an idea, instead of treating her like a person, and that was dehumanizing.

I remember my ex saying that she had commitment issues, but I wonder why she is committed to seeing me on my social media. Although we have parted ways and are no longer accessible to each other in real life, social media forges a new avenue for us to “interact” rather unilaterally. Reminiscent of how she had the boldness to suggest the possibility of a purely physical relationship a month after our breakup, her orbiting behaviour seems to be an extension of the “thing” which we shared, in which she maintained a “commitment-free” connection with me. A “relationship” free of all emotional attachment and full of one-sided feelings.

Interestingly, the physics-based definition of an orbit refers to a regular, repeating path that a spatial object – the satellite – takes around another one – usually a planet or a star. The satellite goes forward and will keep doing so, yet the gravity of the star/planet also pulls it in, thus creating a tug-of-war between the forward-going satellite and the star/planet that does the pulling. A perfect orbit happens when the forces of inertia and gravity between the two objects are balanced. For the orbit to fail and for the two spatial objects to drift apart, the pulling star/planet must cease its pulling and the satellite must not be pulled into the gravity of the star/planet. Otherwise, gravity will cause a collision between the two and lead to a massive catastrophe.

I have stopped gravitating towards my ex and pulling her back into my universe a long time ago, just as I have moved forward in my own lane. There is no use in falling into old gravities when the stars no longer align. The emotional hardship through which I have gone is now a powerful emotional resource for me to write a better story (still a work-in-progress!) than my previous stories, and my ex no longer has the privilege to be part of this better story. Her privilege ended when our story ended. And for as long as I walk this Earth, there will be many other better stories not yet told and written.

I am the satellite that has advanced on my own path, and a planet that has stopped pulling the strings. Maybe I have become a wandering star. Maybe choosing to “block” her is a testament to my moving on.