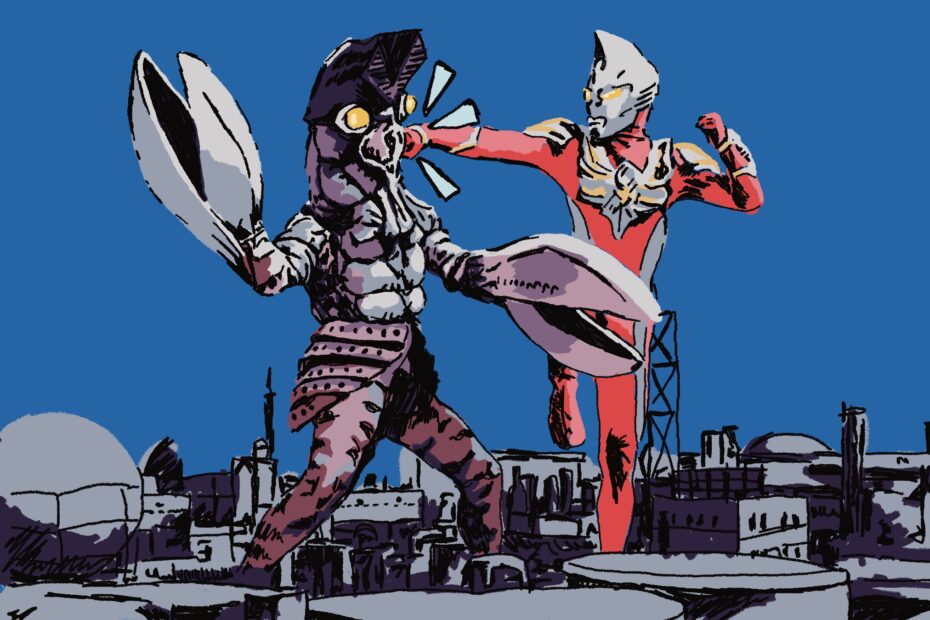 A red comet falls from the sky and crashes into a Science Patrol jet, killing the pilot, Shin Hayata. In what looks like the inside of a crystal ball, a giant alien from Nebula M78 looks down on Shin through the fog and offers his life in order to revive him, effectively merging them into one being — Shin returns with a “beta capsule” which allows him to transform into Ultraman upon command to face whatever space monster arrives on Earth.

And arrive those monsters did, through the 39 episodes of the 1966 Ultraman series. They hailed not only from far-off planets, but also, occasionally, from the costume departments of bigger tokusatsu productions which were booming from the ’50s onwards; one episode features a clearly reused Godzilla costume with a frill added around the neck. At other times, the production team would modify costumes from previous episodes, paint them over to give the monsters a fresh name and backstory.

The budgetary and time constraints for the first Ultraman series seem laughable now in the face of what it grew into: a global media franchise including games, movies, manga, and merchandise that hauls in billions annually for Tsuburaya Productions (Marvel even released a five-issue Ultraman comic book series last year). As far as I know, kids in Japan are still into it; every year there’s yet another Avengers-style Ultraman movie.

But the first Ultraman didn’t fly with that sort of sprawling financial safety net. It was a kids’ sci-fi serial, sure, so each episode moved with a predictable logic, but with all its constraints — the episodic form, target audience, time, money, materials — there was a (literally) hands-on dedication that came out of turning the old into the new. Necessity may be the mother of invention, but in the best cases, ingenuity can be born too. Each episode had explosives experts ensuring that the model buildings would detonate in sequence, a team of painters spending a night to finish the backdrop of a sunset, sculptors building little highways and making them look realistically dirty, even if all the effort amounted to a three-second throwaway shot of the highway collapsing. And when Ultraman did fly, it was his figurine on piano wire, the camera tilted at an angle.

Practical effects force you to be practical. That would be a cute little pull quote, sure, but that’s not what I want to preach on behalf of my younger self. It’s more that it builds a certain imagination when a kid watches a show and senses where the hinges are, how the thing was put together, time and time again. You realize that 100 people doing one small thing right can be its own kind of superhuman effort. Serial kids’ television — not “good” or “bad” television, but plainly engrossing, candy-colored mulch — teaches you to imagine in episodes. You learn to build as much as you can in a sandbox (in my case, a sketchbook) because it will all come toppling down in a half hour. You can reuse designs, you can tell one story 39 ways, and in some cases you should, because growing up you finally appreciate the whole arc, the changes in scenery that obliquely add up to more than the plot in front of you. So why not steal from the things around you that hum with potential? The showrunners themselves loved thrifting from the French. The alien Dada was named after, yes, the avant-garde art movement that pushed for randomness and irrationality as praxis. The alien Baltan was named after Sylvie Vartan, a French singer who was famous at the time in Japan. And the rationale behind that alien’s costume? As one of the directors Toshihiro Iijima has it…

Fifty five years since the first Ultraman series, the human-in-a-suit versus kaiju model has of course been played out to death, along with all its tropes — paper-thin protagonists, man-made monsters, a deus ex machina in the final battle — but what seems too smooth and formulaic about the newer Ultraman movies or Pacific Rim was still being worked out on screen in the original series. From the fight choreography which is much like a mix of backyard wrestling and amateur gymnastics, to the sound design that feels uncannily reminiscent of ’70s krautrock band CAN (their debut album was named Monster Movie), the show was scrappy in more ways than one. It was endearingly janky, and yet remains so well put-together.

This isn’t me trying to convince you to sit through 39 episodes of what might look like Japanese Star Trek (with giants). As with most media you grow out of, I get more enjoyment now learning about the work the creators put into it – the “what if” and “why not” behind every little decision.

The best kind of looking back is when you realize something belongs there, like an old sketchbook you flip through just to see how much time you had on your hands as a kid, how well you wasted it. There’s a scene in Episode 34 where the Science Patrol is interrupted by an emergency call as they’re eating curry. At some point during the filming, director Akio Jissoji leapt from his chair in a lightbulb moment to tell Shin to run out onto the roof with his spoon, mistaking it for the beta capsule. What a brilliant and dumb idea.