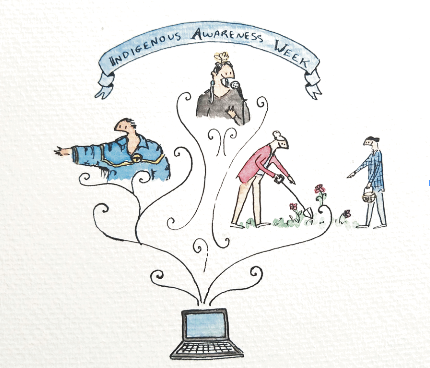 McGill celebrated its 10th annual Indigenous Awareness Weeks (IAWs) online from September 13 to 24. This year featured programming run by Indigenous knowledge keepers from across Turtle Island spanning a multitude of topics, including traditional medicines, wellness, environmental sustainability, reconciliation within post-secondary institutions, and the realities of Indigenous students in colonial institutions. Many of the events focused on food sustainability and sovereignty, as well as connections to the land and what it provides.

The opening ceremonies began on September 13 with the Ohen:ton Karihwatehkwen (The Words Before All Else) by Kanien’kehá:ka elder Otsi’tsaken:ra Patton.
In a later event, the meaning of the Ohen:ton Karihwatehkwen was explored further, as well as other cultural practices and teachings, by Otsi’tsaken:ra and Niioie:ren Patton. “Humans, we need to take the fur of the deer to make clothing so we won’t get cold. We need to eat the meat of those animals so we can survive. And on and on and on it goes, those are the things that they give us,” said Otsi’tsaken:ra Patton. “So when we talk of the opening, we give thanks to life, and all the things that give us life. We came from the earth, and the earth is our mother.”

The ceremony closed with artistic performances from two Indigenous artists. Beatrice Deer, an award-winning Inuk singer, performed her song “Takugiursugit (The First Time I Saw You).” Craig Commanda, an Anishnaabe multi-disciplinary artist – he works in beadwork, poetry, music and sound, and filmmaking – from Kitigan Zibi First Nation, performed a musical composition, “For the Children,” “in dedication to the spirits of the children lost to residential schools.”

Kanien’kehá:ka Knowledge Keeper Elaine Delaronde and Kanien’kehá:ka student Brooke Rice hosted a medicinal plant walk on MacDonald campus. Delaronde and Rice provided recipes, medicinal uses, and personal anecdotes for each plant they found. Delaronde emphasized the importance of protecting the environment and the interconnected relationship between people and the environment: “We treat the earth like our mother. It grows everything. We have everything we need.”

Another medicinal plant walk was hosted by Abénaki lands manager Michel Durand Nolett on September 20. It took place in the McGill-owned Gault Nature Reserve, similarly teaching uses for native plants along with historical context about their use. Both these walks took place on land owned by McGill University – it is important to note that the Gault Nature Reserve was not open to cultural use by the Abénaki people until January 2021. This action was taken to recognize McGill’s 52 Calls to Action, created in 2017 in response to the Truth and Reconciliation Commission of Canada; so far, only seven have been completed, according to the university’s call to action webpage.

On the subject of sustainability and the environment, Kanien’kehá:ka Faith Keeper Ka’nahsohon Deer gave a talk about Indigenous worldviews and the Seventh Generation Principle – a land stewardship concept that focuses on living life and preserving the environment for the benefit and protection of the next seven generations. Deer noted how colonialism and Christian spirituality negatively impacted human connections with the land, and how returning to Indigenous traditional knowledge is imperative to protecting the environment.

On September 14, a roundtable discussed the United Nations Declaration on the Rights of Indigenous Peoples (UNDRIP). The panelists consisted of five Indigenous researchers and representatives from what are currently known as Australia, Canada, New Zealand, and the US on how UNDRIP has been considered, implemented, and ignored in their respective communities.

Another roundtable for Indigenous students was the Student Health and Wellness Kitchen Table Conversation held on September 16. Current and former Indigenous students at McGill shared the highs and lows of their experiences at the institution. Some shared that they struggled to adjust to university life, others that they felt isolated, especially as one of very few Indigenous students on campus. However, the panelists shared their positive experiences in rediscovering and embracing traditional knowledge, and reconsidering their perspectives and ideas on education.

For Wahéhshon Shiann Whitebean, a Kanien’kehá:ka PhD candidate in Educational Studies and a Vanier Scholar, researching the impacts of Indian Day Schools for her thesis required healing. “It was the first time I was working on every level – mentally, emotionally and spiritually – at the same time. I learned to value my family and community, in what we’ve been through and who we are, in a much different way.”

This year’s IAWs closed with a virtual powwow, celebrating the 20th anniversary of McGill’s “First Pow Wow.” Although unable to come together in person, dancers were invited to share videos of performances.

Kanien’kehá:ka activist and artist Ellen Gabriel reflected on the organization of McGill’s first powwow, as well as her experience working at First Peoples House, 20 years later.
“When I worked at First Peoples House, I did my best to try and support the students who were attending McGill, and make them feel at home,” she said, adding that she wanted to create “a safe place [for students] to be who they were, and not as an object of curiosity which I think sometimes we [feel like] because we’ve been so researched to death.”

She also shared her thoughts on reconciliation in post-secondary institutions: “The way Indigenous people want to see change in these institutions, it has to come with education and dialogue and discussion and sometimes that change is not welcomed.”

Recordings of most of the events can be accessed on the IAW’s website (the National Building Reconciliation Forum Workshops were not recorded).