The legacy of residential schools in government-run social care systems

“The federal government is complicit in ongoing genocide” 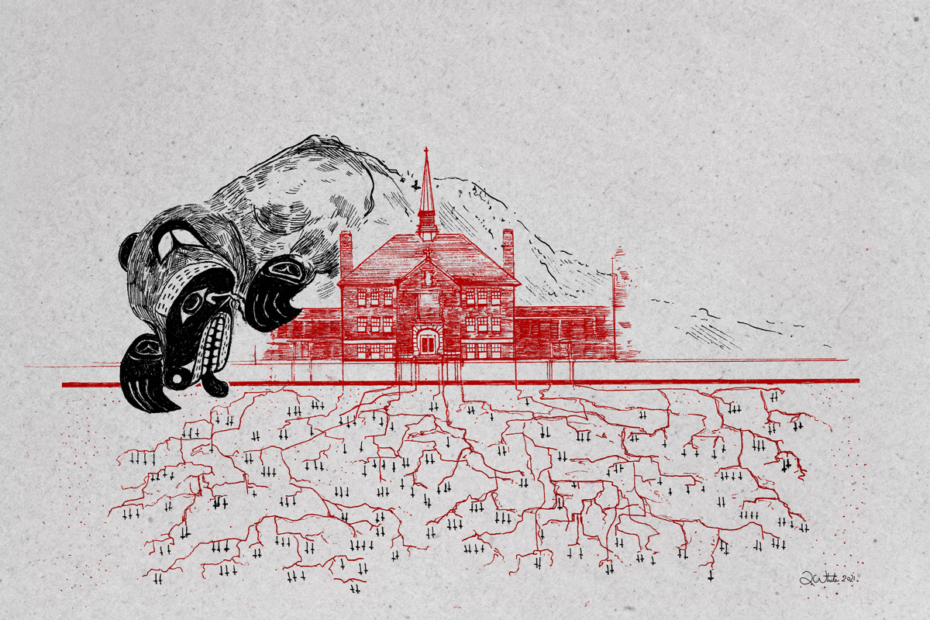 In the past weeks, preliminary searches at residential schools across Turtle Island have uncovered countless unmarked graves, revealing the thousands of Indigenous children across the country who were killed by the forced assimilation of the residential school system. Kamloops Indian Residential school was one of the most publicised discoveries, with the bodies of 215 Indigenous children being found on the grounds in late May. Today, its structure still stands on Tk’emlúps te Secwépemc First Nation ground. For years, survivors of Kamloops Residential School have spoken out about the abuse they faced there, including the group of day scholar students who recounted their traumatic experiences and continued pain in a class action lawsuit against the Canadian government, as well as survivors of the school who have since shared stories of burying their peers on the school grounds. While Prime Minister Justin Trudeau referred to this abuse of Indigenous people in Canada as “a dark and shameful chapter of our country’s history,” Indigenous youth and adults continue to suffer across Turtle Island, including a recent emergency within Montreal at government-run Batshaw Youth and Family Centre, where reports emerged of an Indigenous child confined in a windowless basement. Nunavut MP Mumilaaq Qaqqaq notes the similarities between the residential school system and the contemporary realities for Indigenous youth in social care systems: “Children are still being separated from their communities. Foster care is the new residential school system.” The Daily spoke with Indigenous student Jo Roy regarding the ongoing mistreatment of Indigenous children in social care systems, and how the effects of Kamloops and other residential schools are still ongoing.

Kamloops Residential School was established in 1890 as part of a policy of cultural assimilation and ethnic cleansing by the Catholic Church and the Canadian government. Located on traditional territory of the Secwepeme, Kamloops Residential School was another site of abuse in a long list of institutions across Turtle Island responsible for the murder of Indigenous children. Survivors of Kamloops Residential School have since spoken out about their time at the institution. At a 2013 Truth and Reconciliation hearing, survivor Jeanette Jules shared her experiences with sexual assault at the school. In 1997, survivor Simon Moses described life at the school: “All the hugging I used to get stopped at the residential school. To this day I have a problem saying ‘I love you mom.’” At another Truth and Reconciliation hearing, survivor Sarah McLeod shared the story of a nun forcing her to throw out a carved totem pole she had received as a birthday present. Meals were eaten in silence, students were whipped for wetting the bed, and a number was written on every student’s arm, which is what they were referred to for the duration of their time at the school.

With 500 students attending at a time during peak enrolment, thousands of children at Kamloops Residential School were subject to the brutality of the nuns and priests in charge of their care. While the only official government records show 51 children dying at the school between 1914 and 1963, the discovery of 215 children buried in unmarked graves at Kamloops school is evidence of the mass murder of Indigenous people in residential schools across the country.

The Indigenous communities of Kamloops and more have not received justice or reparations, and as a result, Prime Minister Justin Trudeau has faced criticism. Jagmeet Singh, leader of the NDP, told the House of Commons: “We all mourn the loss of those children, but to honour their lives, we need to move beyond words to action,” in reference to Trudeau’s ongoing failure  to pay reparations to Indigenous communities. Roy characterized Trudeau’s statements as “a pure form of gaslighting.” They continued, “This man is fighting Indigenous children in court, he isn’t fulfilling the promises to First Nation children.”

Roy refers to ongoing legal battles between Trudeau’s cabinet and First Nations families, which Singh motioned to cease on June 7th. Calling the matter a “belligerent and litigious approach to justice,” the motion was supported unanimously by those present – however, Trudeau failed to attend, thereby abstaining from voting. “Trudeau didn’t even have the courage to vote,” Singh said “He walked away from Indigenous people…The cabinet didn’t have the courage to stand up for Indigenous people…They can’t even defend their own actions.”

The failings of the government extend further, with Roy sharing news of an Indigenous youth at Batshaw group home who was forced into isolation in a windowless basement. The youth was mistakenly instructed to attend school, and arrived back at Batshaw group home several hours later, after finding the school closed for the day. The staff at Batshaw stated that this meant the youth was a COVID-19 risk, and subsequently placed them in isolation in a windowless concrete basement for 14 days, in spite of an assessment from the Directeur de la santé publique (DRSP) which confirmed that “the Indigenous youth in question presented little to no risk […] the measures taken by Batshaw were drastic.” As of June 3, it is believed that the child is no longer confined at Batshaw.

“The child protection system is not protecting children,” stated Roy, a student in the School of Social Work. “You don’t need to literally imprison a child for two weeks in a windowless room. You don’t need to do that…When the workers at Batshaw were confronted with what was happening, they didn’t at all see any problem. This is a continuous problem, where Batshaw and the general Western child welfare system just abuses not just children in care, first of all, but Indigenous children in care.” There are many examples of abuse within the foster care system – the deaths of 102 Indigenous children connected to the child welfare system were reported in Northern Ontario between 2013 and 2017 and the death of 17 year old Cree youth Traevon Chalifoux-Desjarlais in 2020, who wasn’t found until four days after his death in a group home in Abbotsford. Roy argues that these continued cases show that “the federal government is complicit in ongoing genocide.”

Six years ago, the Truth and Reconciliation Commission created 94 calls to action. According to First Nations led research centre, the Yellowhead Institute, only eight have been completed. In an interview with CTV News, lawyer and author Michelle Good noted that many of these calls to action included searches for missing children and burial sites: “That was 2015 for goodness sake, and to me it is deeply resonant and reminiscent of the resistance of the federal government to resolving residential school claims in the first place.” Despite lowering the Canadian flag for last Thursday’s Canada Day, Trudeau’s fights against First Nations families in courts, and the continued mistreatment of Indigenous peoples in social care systems are evidence that the government has not and will not protect Indigenous communities across Turtle Island.

Illustration by Haida and Métis artist Tanya White, whose work can be found at https://studiomanylives.square.site, and @many_lives_ on Instagram.