Official Statement by Organizers re: Provost and Vice-Principal Academic Christopher Manfredi’s Response to the Open Letter 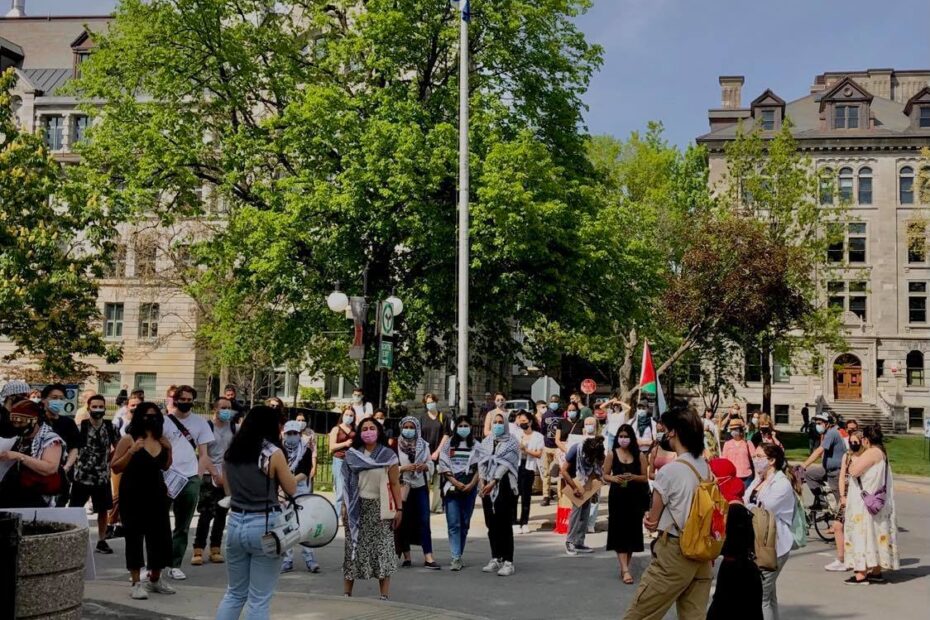 This statement follows the Provost and Vice-Principal Academic Christopher Manfredi’s response to our open letter calling on McGill to divest from all corporations, investments, and institutions that fund and profit from the expansion of illegal settlements in occupied Palestine and to meaningfully commit to its Equity Diversity, and Inclusion (EDI) values by revising the policy-based definition of racism to include Zionism. Given the current and ongoing ethnic cleansing of Jerusalem, the horrific terror bombing of Gaza, and the countless other well-documented acts of state-sanctioned violence being carried out across occupied Palestine right now, it is shameful, yet unfortunately unsurprising that the University has chosen to condemn Palestinian students for making their voices heard, rather than acknowledging its direct role in the violent colonization of Palestine. Below is a brief breakdown of why we are disappointed in the Provost’s email.

We are first and foremost concerned with the way in which a McGill administrative head has sent a message from the Media Relations Office (MRO) to all McGill constituents prior to the petition even being submitted – this raises the question of whether or not this petition and our demands have even gone through the official procedural channels. We suspect that our demands were dismissed without due process. We would also like to point to the power and racial dynamics in the response to our open letter: a group of racialized students which includes Palestinians who are directly impacted by the colonial violence that Zionism promotes are being told by a Vice-Principal of an elite institution – that is built and founded upon the forced labor of enslaved Black and Indigenous people – that our demands are a “misuse” of EDI values.

We consider the response to our open letter nothing short of an abuse of power and a fear tactic to silence our just demands – which have already been signed by over 1 100 of McGill constituents and counting. Provost Christopher Manfredi: you are abusing your position of power and are using coercive language to deter your constituents from supporting our open letter, while vilifying our anti-racist demands as “unacceptable.” We have already received messages from constituents who had signed the letter, informing us that people in their departments are being targeted for supporting the open letter and bullied into removing their signatures. These are constituents who have expressed their solidarity with us and wish to support but feel as though they are unable to do so given the hate messages they have received. Despite these scare tactics, employed by both the administration and Zionists on campus, students are showing their support for Palestinian liberation, as they continue to sign and share this petition, which is clearly expressing popular student anger at McGill’s continued complicity in violent settler-colonial ideologies, from Turtle Island to Palestine.

The email sent by the Provost office to the McGill community is not only itself confirmation of what we know to be true and have experienced, it is also evidence of what the letter denounces: McGill is not a welcoming place for Palestinians, Arabs, Muslim people, and their allies, and it has no desire to become a welcoming place for these communities. In particular, this following excerpt from McGill’s EDI Strategic Plan 2020-2025 Vision subsection contradicts the claim that the Provost is making:

Universities across Canada are presently called upon to recognize and address historical and contemporary forces that result in social inequities in postsecondary contexts. Many such forces have their roots in ideologies and practices – such as colonialism, slavery, and patriarchy. Although these ideologies and practices no longer reflect McGill’s values, their harmful effects persist. As such, our institutional commitment to equity, diversity, and inclusion (EDI) must acknowledge and seek to address the lasting effects of historic injustices that continue to challenge equal opportunities to access, and to succeed within, the McGill community.

Equity, unlike the notion of equality, is not about sameness of treatment. It denotes fairness and justice in process and in results. Equitable outcomes often require differential treatment and resource redistribution to achieve a level playing field among all individuals and communities. This requires recognizing and addressing barriers to opportunities for all to thrive in our University environment.

Despite McGill’s supposed commitment to recognizing and addressing the way that McGill upholds the legacy of violent ideologies, administrators continuously refuse to listen to and amend the very real harm they have enacted on racialized communities. This proves that McGill has no intention of addressing the “historical and contemporary forces that result in social inequities.” Further, the claim that our demands for the University to denounce an apartheid state – which is currently inflicting deadly violence against a colonized people – is a “misuse of our EDI-based plans and policies” is particularly abhorrent. These policies are made for our use and it is the responsibility of the Provost to apply them in ways that promote justice for racialized and colonized students facing entrenched systemic violence.

Furthermore, framing the current events as “erupted violence” and “unrest” that has an effect on “Palestinian and Jewish members of the campus community” is shockingly irresponsible. This disingenuous framing is violent in several ways: (1) it conflates Zionism with Judaism. This is hugely insulting to the anti-Zionist Jewish students who signed the petition, in addition to constituting a classic trope of anti-Semitism, which portrays all Jews as monolithic and supportive of the oppression of Palestinians. It also implies that any criticism of the state of Israel is anti-Semitic, which  is dangerous and wrong. As a settler-colonial regime, Israel is as deserving of severe criticism as any other settler-colonial, racist or otherwise oppressive state. (2) it implies that Palestine and Israel are engaged in “conflict” or “unrest”. This vocabulary implies equal power and responsibility, and serves to deliberately ignore the blatantly unbalanced reality of what is occurring in Palestine: settler colonialism, military occupation, land theft, apartheid, and ethnic cleansing of stateless Palestinians, by a powerful settler-colonial Israeli state, its military forces, and its settlers. Implying otherwise is shallow and violent, and false, since it serves to hide the oppressive system of colonial domination which has lain at the root of the violence since 1948.

Additionally the Provost’s response claims that our open letter demands to “exclude some worldviews and ways of self-identifying from our campus.” We wish to point out that Zionism is not a simple worldview nor is it a way of self-identifying; Zionism is an ideology that upholds and promotes a violent settler-colonial structure that is currently terrorizing, maiming, and killing Palestinians to enforce and expand the Zionist colonization of Palestinian land.

The administration’s statement also conveniently sidestepped a central demand of our petition: divestment from all institutions complicit in the aforementioned atrocities. This is nothing new. In the 1980s, Black and African students demanded that McGill divest from South African apartheid. This campaign was largely driven by the McGill South Africa Committee, which pushed for divestment through educational workshops, sit-ins, and protests. McGill officially divested in 1986, although the practical implementation of total divestment took a few years. This push was reinforced by a “four-hour protest by 1 200 McGill students” in order to pressure the University to cut all academic or financial ties with institutions dealing with South Africa. McGill therefore has a history of promoting and financing apartheid states, only divesting after sustained student pressure. And that is why we are pressuring.

We reject McGill administration instrumentalizing the language of care, community, and inclusion in its institutional effort to silence dissidents and perpetuate a damaging “both-sides-to-blame” narrative. As we stated in our open letter “If McGill fails to actively respond to and institutionalize our demands, then it would confirm what most racialized students on campus feel, which is that the McGill administration’s creation of various ad-hoc committees, policies, and working groups are lip service meant to assuage our well-founded and immediate concerns.”

Despite it all, we hope that McGill University will revise their official statement regarding our open letter and engage with it in good faith. In the meantime, we urge constituents of McGill University to consider the email sent by the Provost with a more critical eye, and we hope that the document below will help in doing so.

Below is a critical analysis of the Provost’s email: