‘The Queen’s Gambit’ is a Triumph

The Netflix miniseries is a stunning exploration of genius and addiction 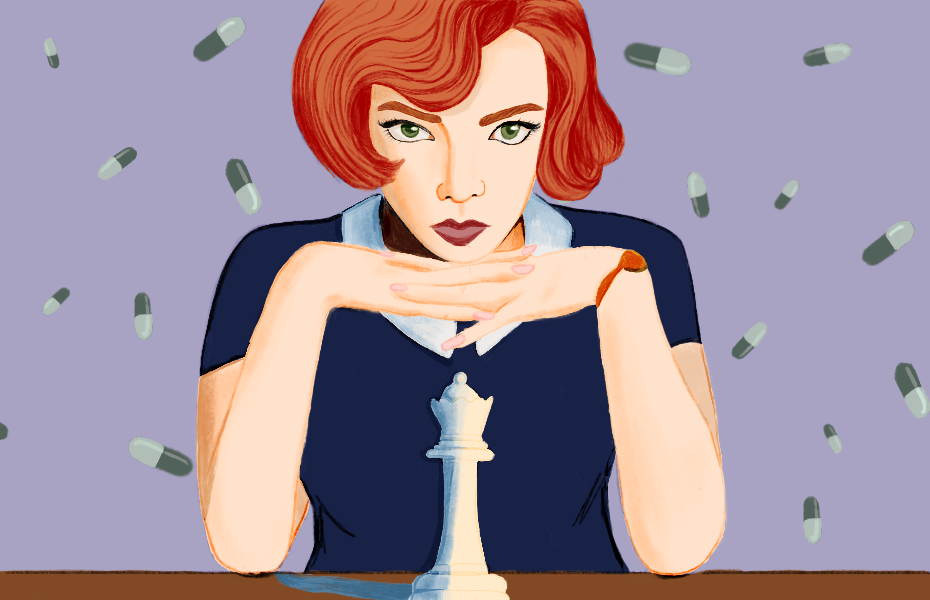 In the initial episode of the Netflix miniseries The Queen’s Gambit, a young Elizabeth “Beth” Harmon (Isla Johnston, later played by Anya Taylor-Joy) is escorted through the orphanage where she will spend her childhood, into a room filled with rows of identical metal-framed beds. The space is cold and alienating, and it’s where Beth will hone her chess-playing skills, and hoard sedatives to hallucinate matches on the ceiling. The Queen’s Gambit depicts its protagonist’s struggle with grief and addiction with sensitivity, using chess as a frame to tackle these complex themes. Fast-paced and tightly-woven, the series is one of the most thrilling releases of the year.

The Queen’s Gambit premiered on Friday October 23rd to universal acclaim – the series scores a rare 100% on Rotten Tomatoes, and it has been praised by Netflix audiences and the global chess community alike. The project is director Scott Frank’s second limited series at Netflix, and it adapts Walter Tevis’ novel of the same name. Much of the series’ success is due to Netflix’s investment in specialized consultants; chess experts Garry Kasparov and Bruce Pandolfini both worked on the show, and they helped create a depiction of chess that felt masterfully authentic. Kasparov, a child chess prodigy himself, imbued his personal experience and career trajectory into Beth’s journey, which gave more depth and nuance to her character.

This sense of realism is also present in the series’ portrayal of addiction. The children at Beth’s orphanage are given one tranquilizer per day, and Beth learns to hoard and abuse the pills once she realizes they enhance her spatial reasoning. The viewer understands through a series of flashbacks to traumatic moments in Beth’s life that the tranquilizers help dull her sensitivities to the real world. The first episode, “Openings,” introduces Beth’s developing addiction, and the passing of legislation that removes her access to these pills. The seven hour-long episodes allow for a broad level of exposition, which creates a highly cinematic experience.

The Queen’s Gambit follows Beth through different stages of her life, and Taylor-Joy brilliantly conveys the passing of time through her characterisation and changing physicality. In an interview with Netflix, the actress indicates that, “when [Beth] is fifteen, she waddles. She walks with flat feet, she fidgets a lot. She doesn’t have a lot of control over her facial expressions.” Taylor-Joy portrays Beth’s growing confidence in her skills by progressively altering her expression from beady-eyed to Beth’s final steely gaze. Her growth and character development is emphasized by the show’s excellent hair and makeup design, spearheaded by Daniel Parker. As Beth ages through the 1940s to the 1960s, her hair loosens up to reflect her increasing self-assuredness.

Despite its intimate depiction of Beth, the show falters in its characterization of certain secondary characters, most notably in Beth’s childhood friend Jolene (Moses Ingram). Jolene, who is Black, is relegated to the role of “best friend” – as critic Bethonie Butler writes in the Washington Post, “the show blunders when it comes to Beth’s childhood friend, whose backstory and character development are so limited that she seems to exist merely to make Beth’s life easier.” While the audience gets to see her succeed as a paralegal with hopes of going to law school, the series devotes little time to the exploration of Jolene’s backstory, even though she remains a significant presence in Beth’s life. This is disappointing, as Jolene is one of the show’s most compelling characters.

Overall, The Queen’s Gambit is another excellent Netflix original, and it has rightfully become one of the streaming service’s most successful miniseries. Though not without its faults, Scott Frank’s accomplished exploration of chess, addiction and a woman’s coming-of-age experience is thoughtful and filled with complex characters and meticulous attention to detail. The series will undoubtedly appeal to a variety of viewers.