Flashback: Into the Creek 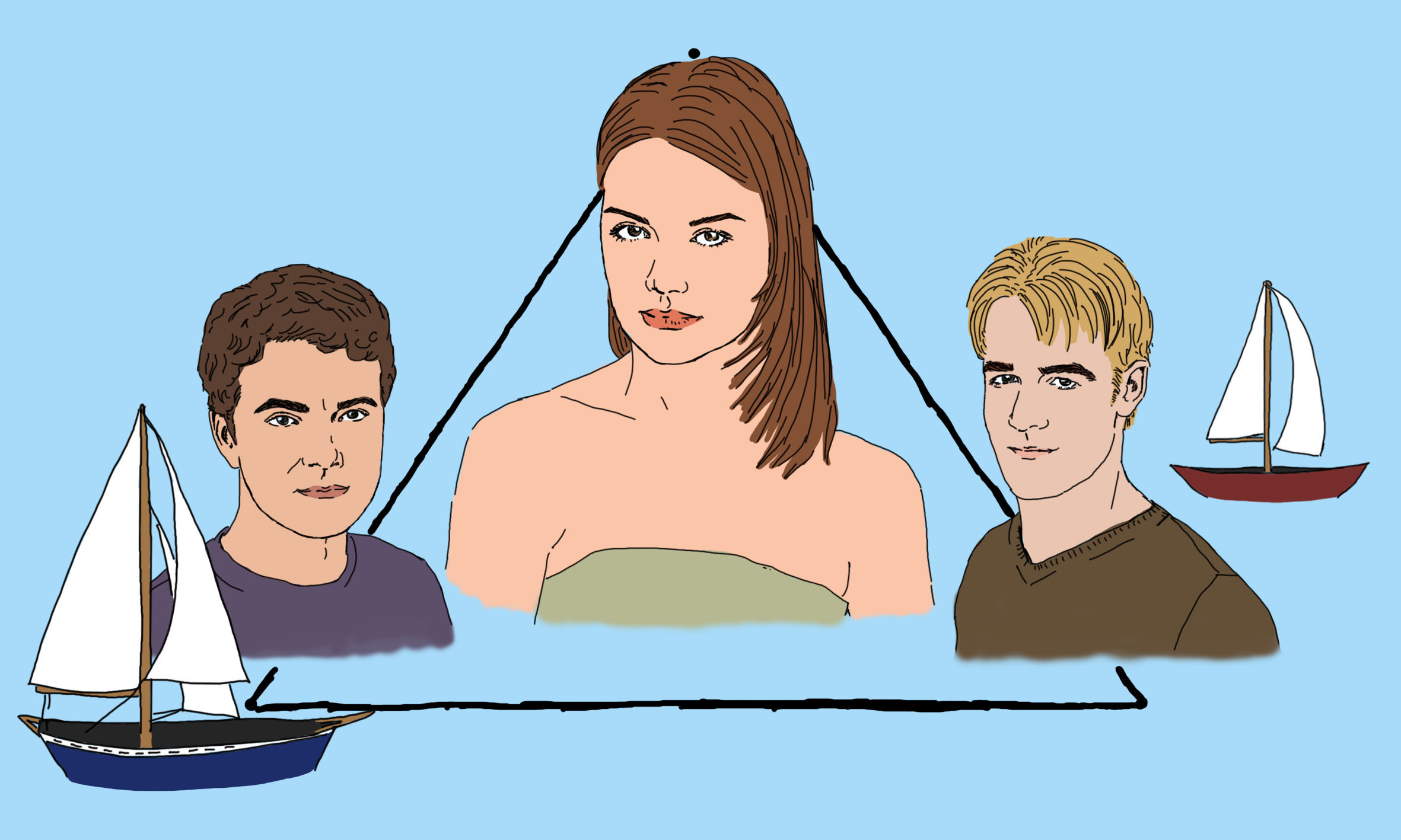 I should start by saying that I hadn’t yet been born when Dawson’s Creek first aired in 1998. The show wasn’t a part of my formative years, and when I watched it for the first time during quarantine, it felt outdated and completely different from my own high school years. Small town life? Teenagers with names like “Dawson” and “Pacey” working in a video rental store? Boats?

And yet, I developed an obsession. I couldn’t help but keep watching Dawson’s Creek, with all of its formulaic teen show charm. Before my very eyes, I saw early aughts television history being made.

For those of you who haven’t watched basically every teen TV drama to ever air, let’s start at the beginning, AKA the year 1990. While “adult” dramas and soaps like The Young and the Restless and Days of Our Lives were well into their 27th seasons, television executives failed to consider how the teen demographic would respond to soapy drama and romance. At this point, most teen shows were sitcoms or ensemble family series – that is, up until the success of Beverly Hills, 90210, which ran from 1990-2000. The show borrowed many elements and plotlines from “adult” soap operas, but replaced the cast with attractive 20-somethings who played teenagers, a staple of the teen drama genre.

The success of Beverly Hills, 90210 prompted the founding of The WB Network, which became a home to teen shows like Buffy the Vampire Slayer, Gilmore Girls, One Tree Hill, and, of course, Dawson’s Creek. These iconic series set the blueprint for the teen TV genre, and specifically influenced the next generation of shows, who took the basic structure and made it racier; Gossip Girl, Pretty Little Liars, and 90210 (the 2008 remake) doubled the drugs and the sex, and even added murder, for some reason. But more than any other show, Dawson’s Creek created the modern formula from which all new teen series are born. Its lack of gimmicky storylines, along with its cast of mostly relatable and down-to-earth characters, established the baseline upon which new teen shows build more complex storylines.

But back to Dawson. The show begins with a central group of four friends: Dawson, played by James Van Der Beek, is the titular teen who somehow becomes so unlikeable that the writers exile him to Los Angeles in the last two seasons, so that we can all get a break. Dawson’s best friend Joey, played by Katie Holmes, is the girl next door (or more accurately, down the creek), and the heart of the show. Pacey, played by Joshua Jackson, is Dawson’s other best friend and a smarmy underachiever – that is, until he falls in love. And Jen, played by Michelle Williams, is the new girl from New York who is punished for her “bad girl past” for all 6 seasons, the last nail in the coffin being her untimely death. They all live in the fictional Capeside, Massachusetts, and due to the town’s coastal geography, boats are often used as plot devices.

Dawson’s Creek starts off simple; Joey likes Dawson, Dawson likes Jen. Pacey is groomed by his “hot teacher,” which we’re all supposed to pretend is normal. (It was the 90’s – what’s your excuse, PLL?) Quickly, though, we realize that Dawson is idealistic about his own love life, to the point of delusion. He quickly burns through relationships because of his possessiveness, and he’s unable to accept that the women he dates don’t match up to his own perfect versions of them. After a season and a half, Jen is removed from the love triangle – she’s honestly too mature for it – and is left instead to her own sad devices, which include being harassed by her toxic ex-boyfriends and overusing alcohol and drugs. At one point, she even dates her own creepy stalker. (Yes, I’m talking about Henry. He’s the worst.)

Lucky for us loyal Dawson viewers, this means that there’s room for Pacey to join in on the romance. And thus began the first teen television love triangle wherein the girl has all the power. Before this, the love triangle trope was written in to force women to compete with each other for the hot guy’s attention, while he flip-flopped between his options and disregarded their feelings. But on Dawson’s Creek, Joey has the agency. She is given the opportunity to have a legitimate friendship with Jen, without jealousy and competition, and she’s liberated from the cycle of repeating her mistakes over and over again with the same guy. She is given the choice.

By season 3 of the show, Joey has already dated Dawson, and the whole thing failed miserably. Pacey, however, has just ended a generally healthy relationship with a new cast addition, Andie (played by Meredith Monroe), so we – and Joey – have a chance to see the full extent of the emotional maturity and depth underneath his slacker, jokester facade.

As Joey realizes her complex feelings for both Dawson and Pacey, we see the show’s main characters’ true personalities emerge. Dawson becomes withholding and spiteful – he even crashes his boat into Pacey’s (see what I mean about the boats?). But Pacey communicates honestly with Joey, and gives her the time and space to decide what she wants. Teenage girls get to see what the nice guy is actually like, and we finally get to see Joey have a healthy, communicative, and respectful relationship (she and Pacey go away on a trip together, on Pacey’s boat). Oh, and we get to see Dawson cry.

Meanwhile, we also get to watch groundbreaking storylines, courtesy of newcomer Andie and her brother Jack (played by Kerr Smith). Characters that experience mental health issues are usually a sensationalized plot device in television, but in Dawson’s Creek, they are treated with respect, normalizing a generation of viewers to the ideas of seeking out help through therapy and taking medication without shame. We see the sweet, yet high-strung Andie have difficulty balancing her high expectations for herself while taking care of her mother, being her brother’s protector, and figuring out her relationship with Pacey. Andie ultimately starts taking medication with the support of her friends and family. When a death triggers her unresolved trauma, she decides, with the help of her support system, that she should take some time to recover at a treatment facility. And no, it’s not a Riverdale-style spooky asylum run by evil nuns. It’s a legitimate mental health treatment center. In another instance, Jen’s experience attending school-mandated therapy helps her understand that her issues with trust are due, in part, to her father’s neglect. The series suggests that anyone can benefit from therapy, regardless of how they look and act, and that it isn’t shameful, or even uncommon, to seek help.

And Dawson’s Creek even has – that’s right! –  a complex gay character. Andie’s brother Jack initially shows up in Capeside as a quiet, artistic love interest for Joey. Eventually, we get to watch him come out with the support of Joey and his other friends, and we see him pursue romantic relationships with interesting, well-developed love interests. The show even aired TV’s first onscreen romantic male kiss. And although Jack  becomes Jen’s best friend, he is not reduced to the “gay best friend” trope. Jen and Jack become a healthy constant in each other’s lives, providing support for one another in times of romantic and familial trouble. We get to see a gay high schooler who is popular, who’s on the football team, who has a supportive group of friends, and who isn’t constantly bullied and traumatized, as gay characters often are. This isn’t to say that there aren’t homophobic characters and plotlines within the show. They just aren’t  the overarching theme of Jack’s entire story. We get to see a nuanced gay character in the 90s. We get to see queer joy.

Watching Dawson’s Creek today, you can definitely see its age showing. The series can no longer be considered a “progressive” television series; it has a severe diversity problem in its casting, Pacey attempts to pester his gay brother out of the closet for much of the show’s first two seasons, and Dawson slut-shames any girl who has sex with someone other than him. Heck, the show isn’t even well-written most of the time. Still, I am an unapologetic fan of this silly teenage drama. Of all that it accomplished, of all that came after it, and of its strange obsession with boats.