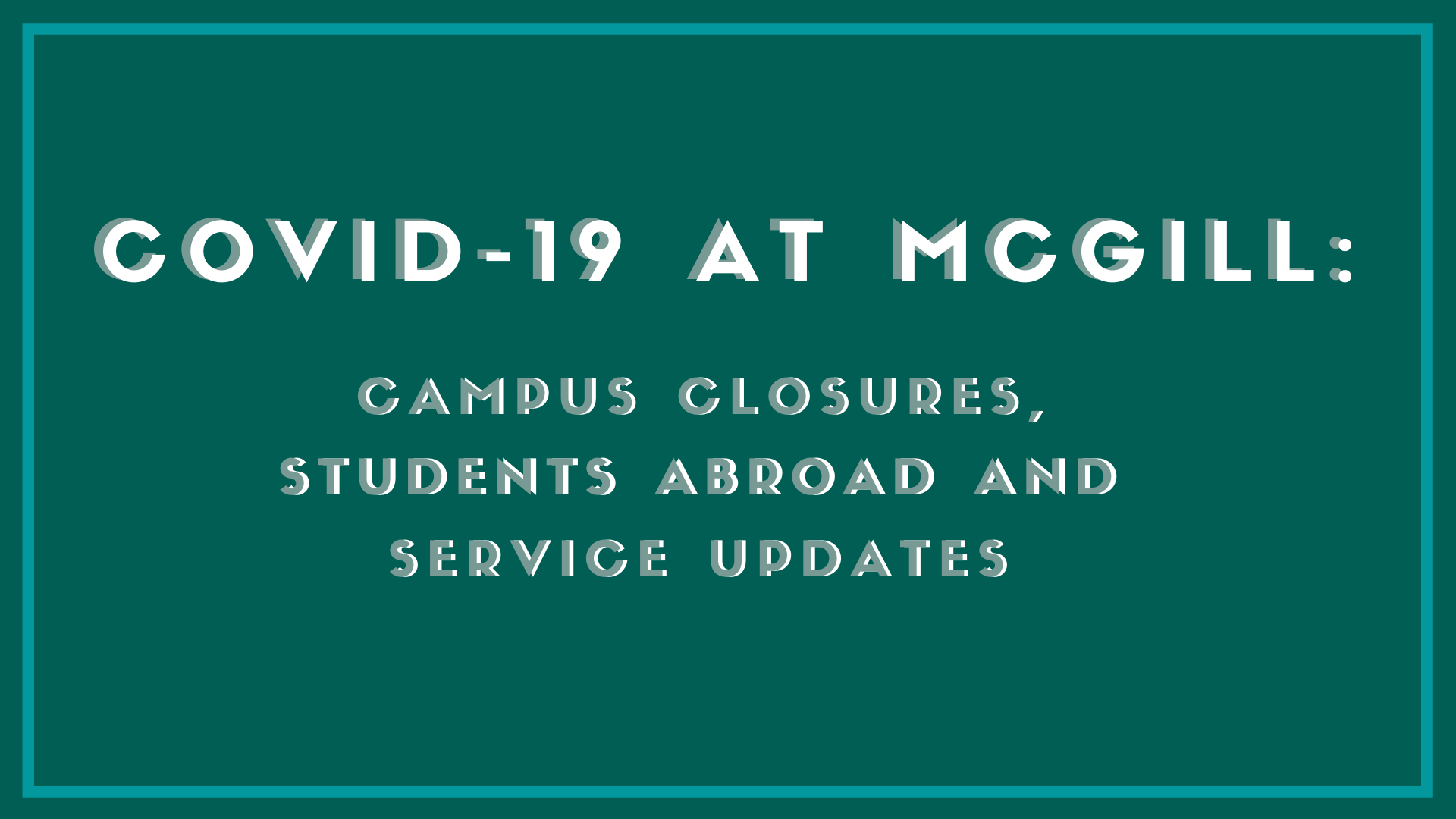 In an email sent from Deputy Provost Fabrice Labeau at 9:15 p.m., the University announced that “All classes, teaching labs, exams and other assessments are suspended for two weeks – except theses defenses.” McGill will be working on resuming teaching and academic activities online during this time.

While food services in residences will remain open, a number of other food options on campus may be closed during the next two weeks, or open with reduced hours.

Additionally, the Wellness Hub will remain closed over this coming week, but may attempt to move online after. Athletics facilities and libraries will be closed until March 30.

Due to the governmental change in classification of all outside countries as “Level 3,” McGill is recalling ALL students abroad. These students are expected to receive additional information soon, including information about academic accommodations. It is unclear at this time if McGill will be financially compensating students abroad for unexpected travel due to COVID-19.

In the last 72 hours, Quebecers have received a myriad of instructions from the provincial government meant to slow the spread of the novel coronavirus, also known as COVID-19. At around 11:45 a.m. on Thursday, March 12, Quebec premier Francois Legault informed the public of these measures, including the barring of all indoor events with more than 250 people in attendance, the mandatory self-quarantine of all employees (in both the private and public sectors) in the health and education systems for 14 days upon return from abroad, and the request that those who have returned from other countries recently – or have flu-like symptoms – voluntarily self-isolate for two weeks.

Less than 24 hours later on Friday, March 13, the province announced new measures – all universities, CEGEPs, schools, and daycare centres are set to be closed for two weeks starting on March 14. Upon this announcement, McGill University sent out an email informing the community that “all student travel outside Canada for internships, student exchanges, international mobility programs, competitions or conferences is suspended until further notice” and that intake of new international students will be suspended for the time being. The exact status of future and incoming international students is unclear at this time.

In an additional administrative email sent on Saturday, March 14, Deputy Provost Fabrice Labeau confirmed that all in-person events at McGill, both on- and off-campus are canceled. Campus libraries and athletic facilities will be closed until Tuesday, March 17. The Student Wellness Hub will also be closed – and subsequently all pre-booked clinic appointments canceled – between March 15-21, as per the latest information students have received via email.

Though the details of the two-week closure have not been officially communicated to students, there are conflicting reports at this time as to what the structure of classes will be. Some professors have posted online modules and lectures, but others are claiming that no new materials or assignments will be introduced while classes are cancelled. A March 14 email from Deputy Provost Labeau stated that “the University is suspending all teaching activities until further notice.” It is unclear at this time what that means for assignments due in the next week, or if online materials will be available.

The most recent measures the provincial government announced on Saturday, March 14 include the banning of all visits to public senior homes and the request that all those who are elderly or immunocompromised avoid all non-essential outings, among other instructions.

The Status of McGill Students Abroad

For McGill students on exchange, the last couple of days have been uncertain. According to an email received by students studying abroad on Friday, those in the only countries that had been previously classified as “Level 3” (“avoid non-essential travel”) by the Canadian government – Iran, Italy, and China – had been recalled by McGill. Students in countries that had been labeled “Level 1 and 2” were told they would receive more information in the next few days. However, on Saturday, March 14, the Canadian government announced that all countries outside of Canada are to be classified as “Level 3.” As of 5:30 p.m. on Saturday, students abroad have not received updates from McGill.

The initial email received by students encouraged McGill students in those countries to leave their institution abroad and return home if they are concerned for their safety. For students that opt to leave, McGill Abroad had instructed them to inform their host institution, as well as McGill, and to ask the former about remote studying options.

William von Herff, a McGill student who was studying abroad for the Panama Field Study Semester, has left the country due to the virus’ quick spread. The number of cases in Panama has risen steadily in the past few days; the first death from COVID-19 was recorded on Tuesday, March 10, and as of March 13, the country has 36 confirmed cases of infection, three of whom are foreigners.

“The country has only 100 respirators and was down to 30 available as of yesterday,” von Herff told the Daily in a message on Friday, March 13. “We were recalled so as to not endanger ourselves nor put a burden on the Panamanian healthcare system.” The country has 2.3 hospital beds per 1,000 people, fewer than both Canada and Italy.

Von Herff thanks the program coordinator, Catherine Potvin, for the quick turnaround in getting students out of the country. Thanks to Potvin, he said, students returning to Montreal will be group-quarantined in Mont Saint-Hilaire, and once in isolation they will receive two days of groceries and three catered days of meals from McGill.

“[Potvin] is trying to get McGill to pay for some flight stuff, and if not, leftover program money will cover it,” he added.

For Sarah Gao, a McGill student on exchange at the University of Sydney in Australia, classes are still taking place in-person. If the situation escalates, however, Gao says that the University will consider a switch to online courses.

“It feels a little bit surreal because I’ve been seeing wash your hand signs everywhere since I first arrived [on February 9, 2020],” she told the Daily in a message on Friday, March 13. According to Gao, one of the student residences has shut down in order to quarantine international students who are just arriving.

“I think that students panicking and blaming McGill […] is causing more panic and more anger and so I’m just trying to stay as calm as possible and trust that they’re going to figure something out,” she concluded. Australia has reached over 200 confirmed cases of COVID-19, as of March 14, 2020, with 112 cases in New South Wales, where Gao’s university is located. There are reports that the number of testing kits available is “rapidly deteriorating.” The country’s ratio for the number of hospital beds per 1,000 people is 4.0.

Another student on exchange in the U.K. has similar thoughts. “Many of my peers are angry at McGill for not reaching out earlier, but many others (including myself) are not,” they told the Daily on Friday. “It must be very difficult for an administration with a massive body of international students to keep track of whose home country is issuing a travel ban, and whose home country is locking down entirely.”

Other students are much more concerned and dissatisfied with McGill’s response, especially in light of the change in travel levels for all countries outside Canada. The past few days have seen a flurry of social media posts from students abroad, confused as to what next steps they should take, considering that every student is now in what classifies as a Level 3 country.

In a phone interview with the Daily on Friday, March 13, SSMU President Bryan Buraga also spoke to the status of the administration’s communication with exchange students, stating that the University “is crafting plans for how best to move forward, because so many students […] are spread throughout the world.”

Though he expressed that McGill acknowledges that “each student [abroad] requires different ways of dealing with the situation,” and that there are a variety of possibilities and solutions depending on the student’s region, communication to exchange students remains general and not region-specific.

“Depending on the situation, it’s not like all of the facts can be applied widely to all students,” he said, “which is why there hasn’t been more information being sent out at the moment.”

Buraga emphasized that this is a “rapidly evolving situation.” Admitting that this is a difficult time for students, he detailed his liaisons with the University administration. Speaking to the delay in communications from them, Buraga said that “because the situation changes on a daily basis, plans are being recruited to comply with government directives and regulations.”

In meetings with Deputy Provost Labeau, Buraga was told that the administration is working to ensure that “contingency plans are in place”, and that the University is “relying on the expert guidance of the Quebec Health Authority.”

“I ask the student body to be patient and to trust […] that both the SSMU and the University are working to ensure the health and safety of students,” he said. “This is, again, a very difficult time. But I know the McGill community, I know the goodness that’s in everyone – so I trust that we can all get through this together.”

According to one student in residence, members of McGill security have broken up “gatherings of any kind” in common spaces and told students to go back to their rooms, despite this not being officially mandated in any email communications. Per online communications to residents and Residence Life employees, programming is suspended until further notice, though Floor Fellows are mandated to stay on duty in residence. Students in residence have been told that McGill will not ask anyone to leave campus, and that those who are advised to self-quarantine will be provided an isolated space to do so.

MSERT will no longer be posted regularly in each residence, but is shifting to coverage in residences on a day-by-day basis, and they are updating their schedules online. They can still be reached at their regular emergency dispatch number, but recommend that students call the COVID-19 hotline (1-877-644-4545) instead if they are experiencing flu-like symptoms.

CORRECTION: A previous version of this article stated that SSMU President Bryan Buraga’s understanding was that incoming international students’ would not be able to attend in the upcoming fall semester until further notice. He has contacted us to let the Daily know that there is no indication that the suspension of international student intake will extend to the fall.

Click here to find an accessible version of the information in this article, as well as resources that will be updated as often as possible.

The Daily’s editorial statement on community support during this public health crisis is available here.

Is something in this article out-of-date? Let us know at news@mcgilldaily.com