Racism and Xenophobia a “Non-Issue” on Campus 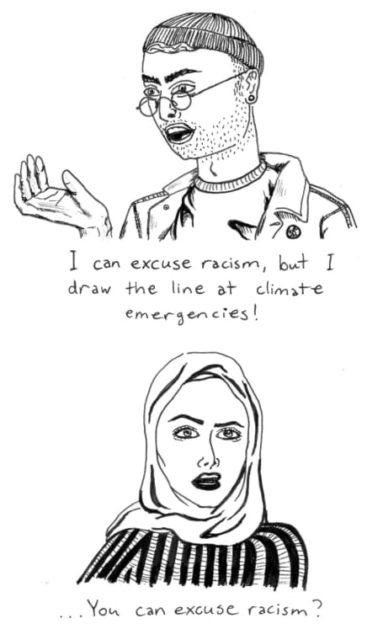 On Friday, January 17, less than one per cent of students in the Faculty of Darts filed into Leacock 132 to attend the DUS GA to discuss striking in solidarity with the Faculty of Education against Law 21. The GA was poorly attended, with only 90 students attending* and as a result did not meet the required numbers to vote, despite quorum being only 5 per cent** of the Faculty of Darts student body.

DUS president Jobby McMan was “present” at the GA, frequently checking his watch and lamenting the time wasted on “politics” that his “constituents literally don’t even care about, lol.” When asked by the Weekly what his methods of raising awareness for the GA were, the president simply juuled and pointed to an email he let DUS executives send out to students 5 minutes before the Assembly was scheduled.

The McGall Weekly spoke to several Darts students on their decision not to attend the GA – several of whom proudly displayed anti-“Bill” 21 buttons on their coats and backpacks, likely picked up from the previous week’s Activities Night.
“Well, I mean, it was a Friday night,” Brent “the Trent” Trenten (Political Science, U3) told the Weekly. “Personally, I didn’t know this was going on, but even if I did, I probably had better things to do.”

When asked about the Strike GA, Kaitlynne Cargill-MacMillan-Walton (Economics, U2) told the Weekly that she didn’t see Law 21 as an issue that was relevant to Arts students.

“It doesn’t really affect that many people, so I felt like striking was way too bold of a statement,” she said. Instead, Kaitlynne made a point of emphasizing when student mobilization is important, such as the Climate March, which occurred last October. “So many people showed up for that GA, the atmosphere was just so amazing, electric even,” Kaitlynne continued. “It’s so incredible to see all of my white peers showing up for our planet, especially considering how many people are STILL wearing fur and eating meat, which is like, super bad karma.”

Kyle (Philosophy, U7) told the Weekly that student mobilizations like the attempted strike take away from larger concerns by spending time on the Law. “Bill 12 [sic] or whatever it is just isn’t that big a deal. We need to focus on the real marginalized issues on campus, like women swearing in student government or people being cyber-bullied for forgetting to send one tiny email, like, one time.”

Kaitlynne agreed, saying “It’s like they said on that show, University. I can excuse xenophobia, but I draw the line at single-use plastics.”

*these are real numbers
**no this is not a joke