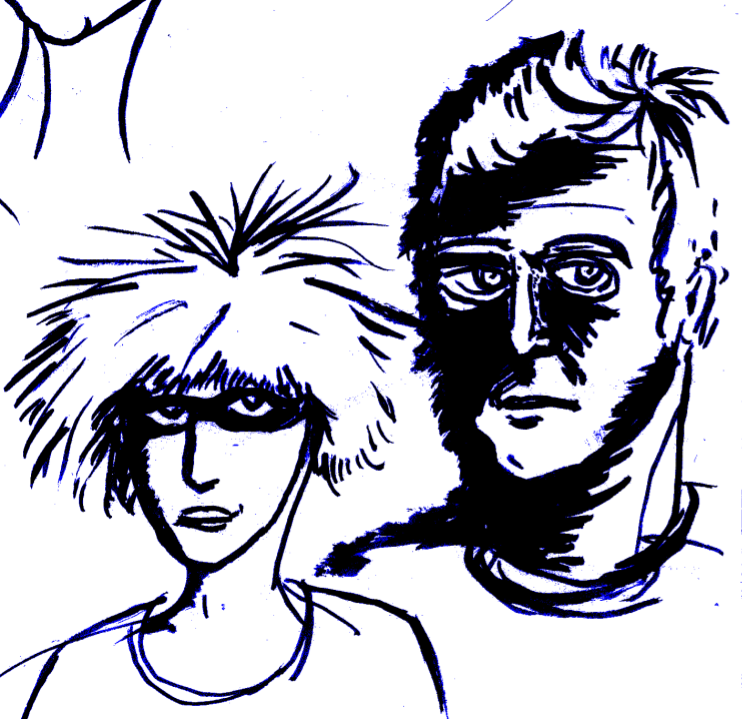 “Is this testing whether I’m a replicant or a lesbian Mr. Deckard?” Rachel asks coyly as Rick administers the Voigt Comp test. Perhaps the answer should be…both! Ridly Scott’s classic sci-fi film Blade Runner, based upon Philip K. Dick’s novel, is an examination of what it is to be human. The journey though post apocalyptic streets perpetually drenched in rain follows bounty hunter Rick Deckard as he tries to capture and “retire” four renegade replicants: robots made so human that it becomes hard to tell the difference. Both the novel and the film are commonly accepted as a commentary on the inevitable coming of AI, singularity, and the societal dangers that come with technology. But what if the film is an allegory for something else; for instance, queerness in a world of institutionalized homophobia? Though the evidence towards this conclusion is thin, it still serves as an interesting thought experiment. For then the film becomes not a cop chasing robots, but a reiteration of the everyday police persecution and discrimination against LGBTQ+ community. Seen in this light, the question of whether Rick Deckard is a replicant himself adds further nuance. The cruel irony persecuting other replicants becomes a poignant allegory for internalized homophobia and denial.

How chilling it is that this funny machine defines a person’s identity, and subsequently their designated place in social hierarchy.

There are really only a few overt examples of any reference to “queerness” throughout the film, appearing to be more anomaly than intention. The aforementioned example of Rachel’s cool retort seems more like an attempt to show how arbitrary the replicant test is. Rachel’s remark acts to deflect and undermine the test. But what is quickly glanced over as a bit of flirtatious snark should in fact be examined more closely. If the Voigt Comp test is considered as a way of determining someone’s sexual orientation, it takes on a much more ominous tone. The test’s wheezing bellows, flickering pictures of eyes, and weird questions should already induce skepticism. Not to mention the troubling fact that this silly test is the only thing between determining “human” or “replicant,” or in other words, alive, or persecuted. How chilling that this funny machine defines a person’s identity, and subsequently their designated place in social hierarchy? Taken as a test of humanness, it’s all swallowed with the good faith in the genre, a little science fiction fun. When applied to real life discrimination, it stinks of eugenics and harassment.

The other allusion to homosexuality takes even more imagination to examine, but leads to no less interesting conclusions about what the film is trying to do. Roy Batty, the leader of the rebellious replicants, shouts something off handedly to Rick on the infamous Bradbury building chase scene: “Straight doesn’t seem to be good enough!” It seems that he is referring to Rick Deckard’s bad aim as he tries to kill Roy. Taken as a double entendre for sexual orientation, could it be a criticism of Rick’s choices to adhere to the system? The default? This remark, tossed out with all the taunting witticism and joie de vivre that Roy brings to this sequence, surely has many meanings. Besides simply criticizing Rick’s inability as a cop, it also mocks him as being perhaps straight laced and rule abiding. It might also be a general remark to Rick’s lame existence. To contrast the two characters in this scene, it becomes uncertain as to who is the one on the run, and who is doing the chasing; their respective purposes are ambiguous. Roy is trying to stay alive, but he is also trying to teach Rick a lesson in living life to its fullest. Is it so far a stretch to say that he is trying to coax Rick to renounce heterosexuality and the “norm” as well?

Rick by contrast, is just trying to get a job done. Roy, running around in nothing but his underwear, howling like a werewolf, is living and feeling. Rick, with his broken fingers and rain drenched coat is miserable. Rick is outshadowed by Roy in his ability to live life to its fullest, despite the tragedy he has endured. As viewers, we know that he has lost all five members of his rebellion, most recently with the especially gruesome slaughter of Priss. Is this a call out to straight members of society who willfully ignore LGBTQ+ counterculture in both its cultural creations and the tragedies imposed by the conventional world?

It would be foolish not to include an examination of the scene in which Roy kisses his creator Tyrell full on the mouth before killing him. Though in his biography, Rutger Hauer (who plays Roy in the film) emphasizes that he didn’t intend for it to be particularly romantic, it’s still worth examining what it means. Hauer explains that for him, it was the best way he could express all the complicated emotions of meeting and being disappointed by your maker. What’s more, Hauer suggests that as a replicant Roy has one way of showing love whether it’s to his “father,” “sister,” or “lover.” This doesn’t capture the nuance of these complicated relationships. For instance, Tyrell is the surrogate father figure, but then again, the fact that he isn’t leaves open a world of interpretation. Most importantly, who is Priss? She could easily be a sister or lover. This exacerbates the complications of replicant relationships. This is further exemplified by Leon’s obsession with his photographs, the fierce loyalty they all have to each other because they have no one else. That being said, what does Roy kissing then promptly killing Tyrell mean? It could be taken as a sort of Oedipal instance of killing his father and romancing his mother, Tyrell being both the mother and the father in this case.

A fascinating result of taking the replicants as allegory for queer communities is the debate around whether Rick Deckard is in fact himself, a replicant. “You ever take that test yourself Mr. Deckard?” Rachel asks him at one point in the film referring to the Voigt Camp replicant (homosexuality?) test. From this point, a doubt is established in the mind of the viewers which is never resolved. At face value, it’s a great comment on the self reflexive hypocrisy of the police force. Adding the new dimension of a metaphor for being gay, this becomes a sharp reflection of the way our society can be really, really messed up. Is Rick Deckard gay? If so, then the Bradbury building chase scene can be read as Roy trying to teach Rick to accept himself as well as a better way of life. Roy offers an ontology based in identity affirmation, and rejection of modes of convention and the violent oppression of the police. Roy’s strategy seems to work to some extent: Rick reevaluates his life and runs away with Rachel. Though clearly heterosexual, it’s more important that he rejects police- hood in favour of a rebellious existence.

There are certain facts in the film which are taken for granted for the sake of plot. For the purpose of analyzing the film in a queer perspective, they prove particularly curious. Particularly in wondering why the replicants are not allowed to be on Earth? In a brief prelude, the film explains some dreadful disaster as a result of replicatant habitation, but the restriction of being a replicant and being on Earth is never explained. However, it does serve as an interesting point on the arbitrary restrictions and interdictions placed on marginalized communities. Similarly half-formed excuses may be given by a homophobe as to why certain rights aren’t allowed allowed, or why some are used for persecution. The replicant restriction is not only blatant segregation, but indicative of the fear that always surrounds “the other.”