Interview with an Artist: Jesse Tungilik

Discussing Art as a Means of Activism 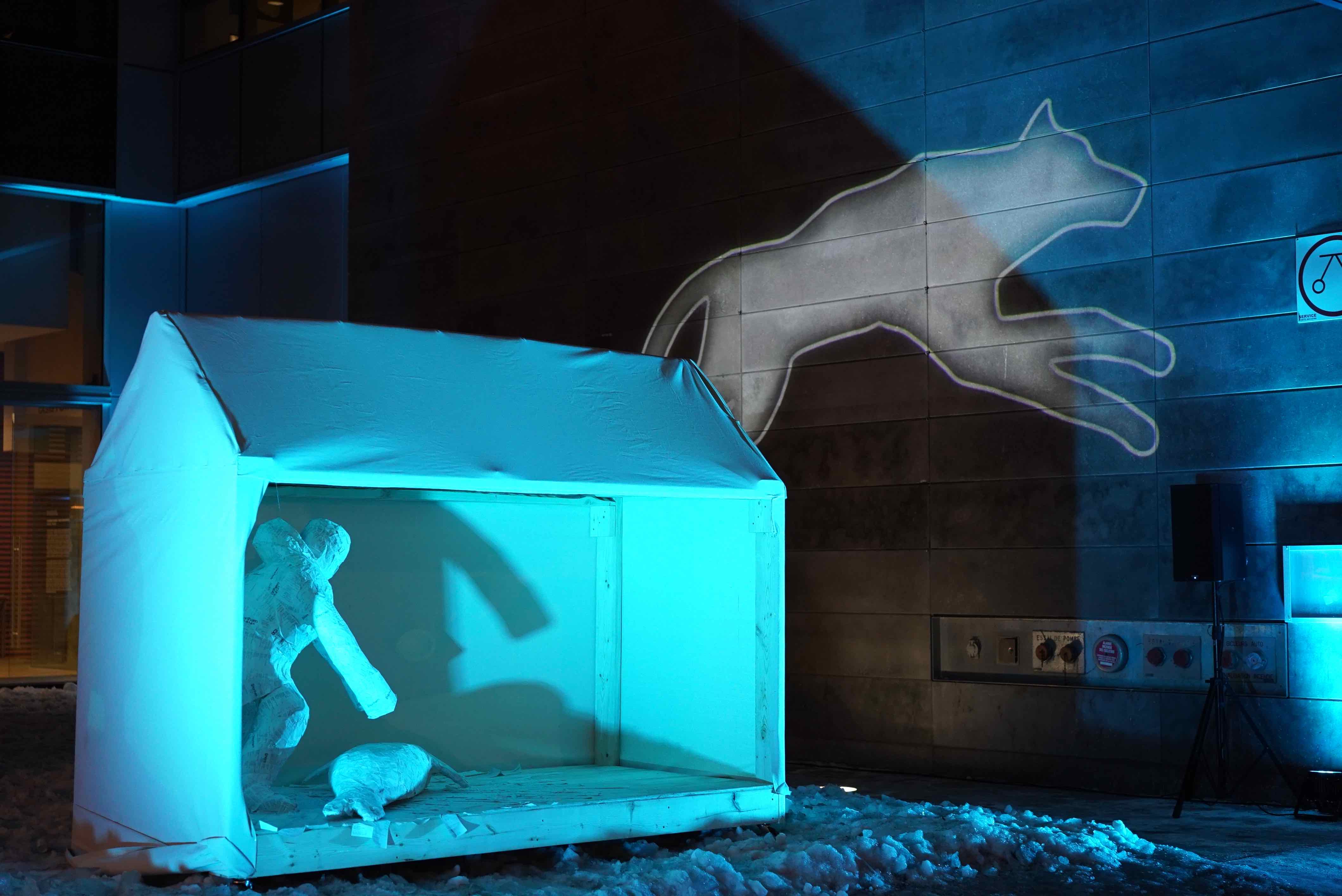 On March 2, Feeding My Family, a sculpture depicting the food insecurity faced by Inuit people, was featured at Montreal’s Nuit Blanche. The artist, Jesse Tungilik, is an Inuit artist from Iqaluit and is currently studying as an Artist-in-Residence at Concordia University. The McGill Daily had the opportunity to interview Tungilik, gaining insight into his artistic process and his method of using visual art to raise awareness of structural inequalities.

The McGill Daily (MD): What was the process like for your sculpture Feeding My Family to become a part of Nuit Blanche?

Jesse Tungilik (JT): I was invited to take part in Nuit Blanche as part of a longer artist residency at Concordia sponsored by two Social Sciences and Humanities Research Council (SSHRC) projects – Inuit Futures in Arts Leadership, and the Initiative for Indigenous Futures. It was through this residency that I was put in touch with the GLAM (Galleries, Libraries, Archives, and Museums) Collective for the “Memory Keepers” installation. 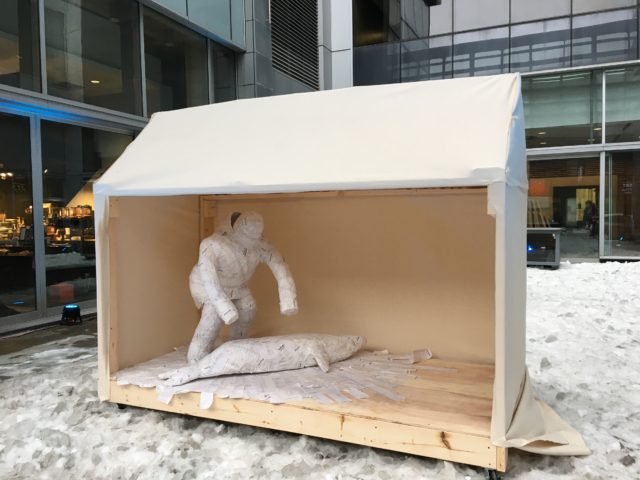 MD: In Feeding My Family, the hunter and seal are covered in receipts, and the hunter’s hands are cut off. Why did you choose to make political statements through these specific artistic decisions?

JT: Feeding My Family is a mixed-media conceptual sculpture of an Inuit hunter butchering a seal. Both the hunter and seal are covered in Northern and NorthMart receipts that I collected over a period of five years while living in Pangnirtung and Iqaluit, Nunavut. I created this sculpture to bring attention to the issues of food insecurity and the prohibitively high cost of living in the North, as well as forced relocation, colonization, and the assimilation of Inuit people into the Canadian body politic. Inuit people used to be self-sufficient before they were made Canadian subjects. With this sculpture, I wanted to juxtapose the traditional imagery of the Inuit hunter with the contemporary imagery of the grocery receipts. I also wanted to give the impression of disconnection between the hunter and the seal by removing the hunter’s hands. Additionally, I wanted to demonstrate the erasure of cultural identity by removing the facial features of the hunter, and to reference forced relocation by having both figures planted in place by the receipts inside the tent structure.

In terms of physical characteristics, my original intention was to make the figures life-sized, but I ended up scaling them down slightly due to time constraints. It also needed to fit within the tent structure, which was size-restricted, because the whole thing needed to fit through double doors. Additionally, I have always been very interested in exploring different scales in my sculptures. My grandfather was well-known for his ultra-miniature ivory carvings, so I like the idea of working in a large scale as a way to contrast our work.

In terms of materials, with this work, as well as other similar sculptures I’ve made, I have been very interested in using the various objects I find as a way to explore contemporary imagery and themes. Further, these objects act as an extension of the traditional Inuit way of using materials from our physical surroundings. Our surroundings have changed dramatically over time, and I want to convey that in my art. To me, this is an analogue of the dramatic cultural and social changes that Inuit have been experiencing as well.

MD: How do you hope to use visual art to raise awareness about food insecurity or other issues?

JT: I am very interested in using conceptual art as a way to alter public perception and to draw attention to the many social and political issues faced by Inuit in Canada today. Because the North is so inaccessible to most, and has been portrayed in the media mostly by non-Inuit, I think it’s particularly important for Inuit to tell our own stories, to offer our own perspectives, and to start to dispel some of the cultural stereotypes that we have been saddled with. Our lives today are far more complex and nuanced than most people realize, and I think art has an important role in communicating this. For generations, the government has controlled almost every aspect of life for the Inuit, and that has created a sense of powerlessness among many. I think art has the potential of empowering Inuit to start thinking about the future that we want to create for ourselves. 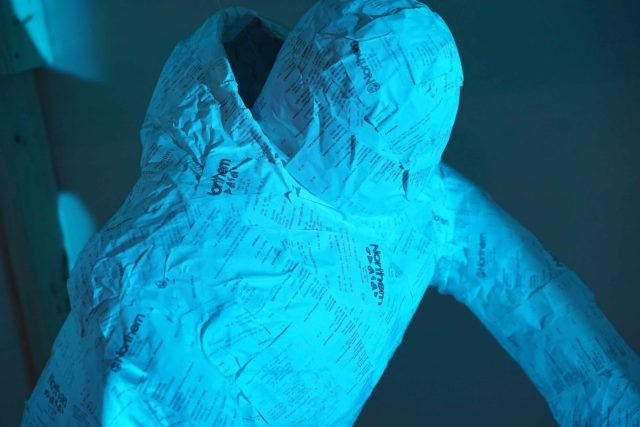 JT: Some of my sculptural work deals with subject matter that is deeply unsettling to many Canadians, such as colonization, assimilation, inter-generational trauma, addiction, and abuse. These themes and subjects are at odds with popular stereotypes of Inuit art and the trope of the “happy-go-lucky Esk*mo” portrayed in classic films and literature. I think it’s important to portray the actual reality facing Inuit people in Canada. I think one of the major barriers faced by Indigenous peoples today is that we live in a country that refuses to acknowledge, at a very basic level, that it was founded on colonization. The policies of assimilation and cultural warfare have never stopped. We are constantly being gaslighted at a societal scale and told that colonization is a thing of the past in Canada, but the truth is that it never stopped. The only reconciliation Canada is actually interested in is for Indigenous peoples to reconcile with the status quo. I started creating conceptual art as a way to discuss these issues with the hope that it will get people to think differently and change their  behaviour. I’ve found that so many discussions about contemporary Indigenous issues in Canada have become very polarized and emotional, so that people have become desensitized and apathetic and tend to zone out. I turned to conceptual art as a way to get around preconceived notions, and to portray complex issues in a way that engages people in thoughtful discussion.

MD: Do you have any future pieces that you’re working on that we should look out for?

JT: I have a number of contemporary and conceptual sculptures planned in the future, but my primary focus for the rest of my residency at Concordia is to design and make a spacesuit out of sealskin and other traditional materials.

Jesse Tungilik is currently an Artist-in–Residence at Concordia University. Keep an eye out for his future artwork.