Reframing the Conversation on Campus 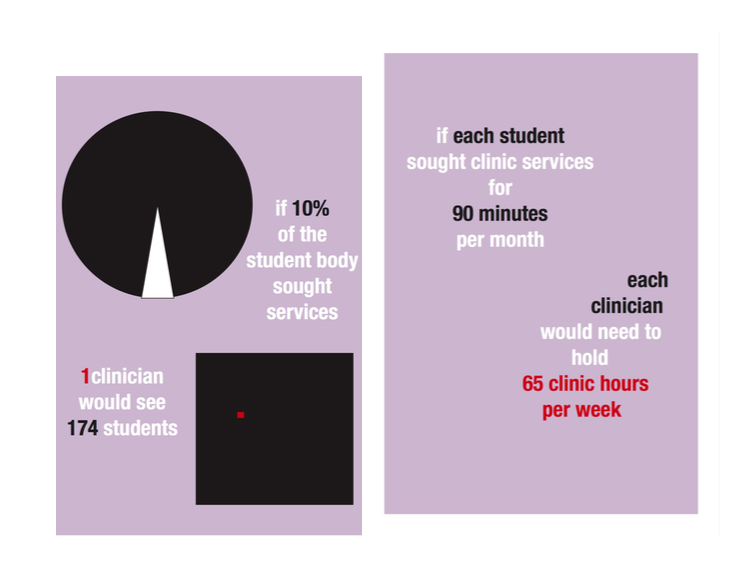 January 28, 2019 marked the beginning of Well Week, the first integrated mental health week organized by McGill Student Services in collaboration with students and student groups. Coinciding with the nationally recognized “Bell Let’s Talk” Day on January 30, the week aimed to increase awareness of mental health and reduce stigma. A variety of workshops, talks, and activities were held across campus.

While projects like Well Week are important for McGill staff and students to increase their awareness of mental health issues, we need to remember that the impact of mental illness is not temporary. Mental illness deserves the kind of attention it receives during Well Week, all year. The World Health Organization (WHO) reports that 450 million people struggle with mental illness worldwide with 6.7 million in Canada, making it the leading cause of disability. This is particularly relevant to the college population, given that people aged between 15 and 24 are the most likely to experience mental illness and/or substance use disorder.  People of colour, women, queer and trans people, and other often marginalized groups also experience higher rates of mental illness. While mental illness is not commonly thought of as a global health crisis, Canada has reached a point where it can no longer ignore the increasing number of people affected by mental illness and seeking help. Furthermore, we cannot ignore the need for better care and treatment. Currently, one in three Canadians say that they had a mental health need in the past year  and stated that their needs were not fully met.

McGill University needs to respond to mental health issues the same way that other health crises that affect physical health (such as cancer or diabetes) are tackled: with immediate urgency and care.

Although it is important to consider mental illness a global health crisis to increase urgency and awareness, it is also crucial to remember that there is not necessarily a “cure” or “end.” Many who suffer from mental illness experience lifelong symptoms. Treatment should not aim to eradicate mental illness, but rather make the illness manageable. Most people afflicted are reluctant to seek help due to stigma or feelings of isolation. Institutional barriers make accessing care even more difficult.  At McGill, students who do recognize a need for treatment often have difficulty accessing it  through McGill Counseling and Psychiatric Services. There is a severe lack of recognition of the growing demand for adequate care from students, as only 23 staff members service a student body of over 40,000. Even if only 10 per cent of the student population sought counseling (which is a conservative estimate, considering 18 per cent of the Canadian population suffers from mental health issues), 23 clinicians would need to provide services to about 171 students each. If every student only accessed clinic hours for one hour per month, each clinician would be working at least 44 hours per week. Although there has been a 43 per cent increase in counseling staff since 2014, there are clearly still inadequate services. McGill University needs to respond to mental health issues the same way that other health crises that affect physical health (such as cancer or diabetes) are tackled – with immediate urgency and care. It has been announced that a $14 million student Wellness Hub partly funded by the Rossy Foundation, will open in late April. The Rossy Hub, though a step forward, does not seem to focus on providing more personalized care.  McGill needs to do better.

When asking McGill students whether they thought of mental illness as a global crisis, many  thought that considering it one could help in improving treatment. Furthermore, it could call attention to the issues that a large number of people face, especially as students. Egan, a first-year history student, said, “It seems people are a bit more open about being mentally [ill], and a lot of my friends have had depression; I wouldn’t be surprised if it was like this everywhere.”

Unless students are in a position to receive care on a two-week to monthly basis, those who require more specialized attention are neglected.

Many have unfortunately had difficult experiences dealing with McGill Counseling and Psychiatric Services, due to a lack of availability and attention to specific needs. Meghan, a first year English literature student, stated, “I went in and explained that I was not going to do anything, but that I was suicidal and wanted to see someone. There was no sympathy, no asking why, just immediately suggesting that I be admitted to a hospital.” She explained further, “they gave me a sheet of private therapists and said their waiting list was long and that private counseling was a faster option.” The fact that McGill is ill-equipped to deal with individuals who are in need of weekly care but cannot afford to pay for private facilities (which often charge at least $100 per session), begs the question of whether the services offered are truly “accessible.” Ultimately, it seems that they are not. Unless students are in a position to receive care on a two-week to  monthly basis, those who require more specialized attention are neglected. When speaking of the appointment she received, Meghan said, “[It] lasted 15 minutes.” Kelsey, a former education student in secondary English, said, “when I was at McGill and tried to receive mental health services, I felt as though the resources were severely lacking, especially considering the size of the student body. It felt very bureaucratic, not personal whatsoever.”

There has also been criticism of the way in which Student Services has attempted to offer students other forms of care. While students can request to meet with a French-speaking counsellor or a member of the PRIDE team (a team of LGBTQ-affirming clinicians), there are limits to how much care is tailored to students needs. “[The University] is constantly putting money and efforts into things like therapy puppies which, while cute, do nothing about the fact that they don’t have nearly enough counselors or any eating disorder program,” said Meghan. Indeed, the previous eating disorder program offered by the university has had its funding cut, and it is currently under review. Ignoring this issue as a global crisis leads administrators to identify depression or anxiety in students as simply a result of midterms or finals season. Kelsey pointed out that “mental health is seen as something that only flares up when students are at the end of the term, and not as chronic illnesses that are intensified by the lack of resources at the school and the role academia plays in general ways contributing to high stress levels, anxiety, depression, et cetera.”

A lot of blame for the inadequacy of the counselling services has been attributed to former Deputy Provost for Student Life and Learning, Ollivier Dyens. A 2017 editorial written by the Daily highlighted the impact of Dyens’ leadership, stating, “between 2013 and 2016, McGill saw a 35 per cent increase in students seeking mental health services. However, over $2.5 million has been cut from Student Services’ overhead finances in the past seven years.” Dyens’ mandate ended, and Engineering professor Fabrice Labeau began a one year appointment on June 18, 2018. As of yet, Labeau does not seem to have made any significant changes to improve the lives of the students struggling with mental health issues.

“[The University] is constantly putting money and efforts into things like therapy puppies which, while cute, do nothing to about the fact that they don’t have nearly enough counsellors or any eating disorder program”

As  Well Week comes to a close, McGill University needs to do better for its students while remembering that awareness and action are important all year.  These need to be sustained for our student body’s collective mental health to improve and thrive. Providing proper services and care to students has never been more important. Genuinely engaging with individuals to understand their unique needs based on their experiences is an important consultation step for the administration to take. Students have called on McGill to do better, and to set an example for what proper mental health care looks like.