An Interview with “The Why Intersection” 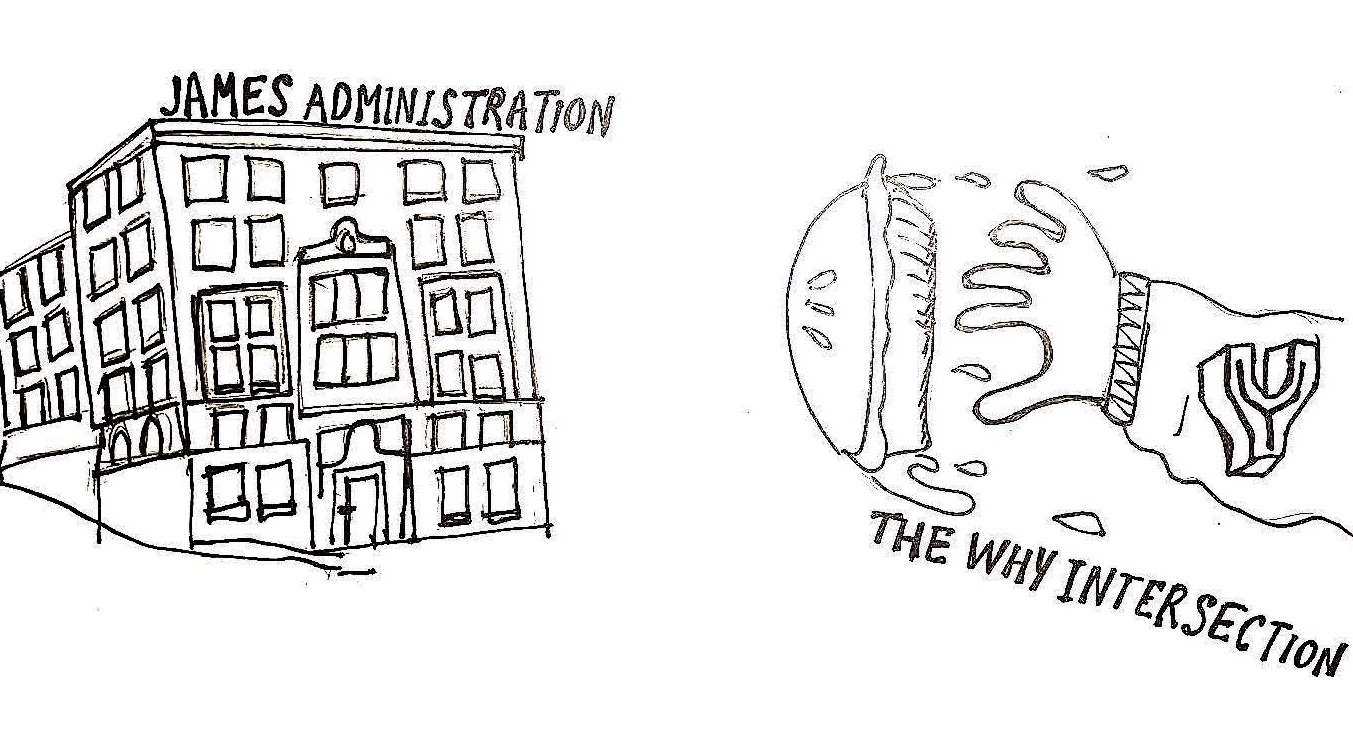 The McGill Daily sat down with Grace Bahler and Catherine Morrison, Executive Editors at The Why Intersection (whyintersection.com), to discuss their website and their opinions on the role of political satire. Bahler and Morrison started The Why Intersection in August 2018 and hope to provide a platform for students to discuss McGill, the administration, as well as issues on campus and in Montreal in a comedic and accessible way.

The McGill Daily (MD): Can you tell us a little about what The Why Intersection does?

Grace Bahler (GB): Essentially, it’s an online satirical magazine. When we created it, we envisioned it as a place where people could make fun of the administration, and just the ridiculousness of being at McGill or in Montreal.

Catherine Morrison (CM): It doesn’t have to be about McGill; we have some Concordia students and some students from Ottawa writing for us. It’s just a place for people to get their voices heard about anything that bothers them or anything they want to make fun of about being a student.

MD: So you started it because you saw the need for an outlet like this?

GB: Yeah, I was a fan of The McTavish Radish but I noticed they weren’t posting anymore. I thought it was an opportunity to create something, so we started messaging each other over the summer saying, “let’s do this!”

CM: Both of us already had a background in journalistic writing, but neither of us had really gotten into satire, even though it’s a huge interest for both of us. We couldn’t really find a place on campus where we could practice satirical writing, so we decided to start our own.

MD: What do you see as The Why Intersection’s role on campus and for students?

GB: I think it’s adding a much needed voice to the McGill campus for people who feel like they’re not being represented through traditional op-ed pieces or other kinds of reporting. Anyone can write for it, and it shows an entirely new perspective on things and people on campus.

CM: Even though other student publications do take people of all levels of experience, sometimes new writers feel like they don’t have a lot of control over their writing or that their writing isn’t appreciated. I know that when I started out, it was a little hard to break through the system, so I think this is a good way for people to start. We have a really direct editing style, so people’s articles don’t change too much. We accept almost all of the submissions we get, so it’s a really good way for people to get their voices heard and express themselves.

GB: And to think critically too, even about the small things on campus. It’s turning observational humour into a very structured headline. A lot of stand-up comedians and sketch writers write for sites like The Onion, Reductress, and The Beaverton, so it’s cool for people to have that on a university level. That way they’re ready to apply and submit pitches to bigger publications.

MD: What do you mean by “direct editing”?

CM: A lot of the time, you write something and then the editors take over and you don’t have much input anymore, which is totally fine and works really well for a lot of publications. But for us, writers will bring an idea to us, then we’ll come up with a headline together, and from there they’ll write their piece. And then we’ll go through the editing process with them. Me and Grace usually split up the articles, so it’s only one editor editing each piece, which I think makes writers a lot more comfortable and not like it’s overcrowded.

GB: And we try to be as non-hierarchical as possible. Everyone’s on the same page and they have as much control as we do over what we’re publishing.

CM: We’re the editors, but it’s not like we impose our own opinions over others.

GB: It’s really just a signature on an email at the end of the day! It’s also a good outlet for people interested in comedy writing. Staff writers are required to write three articles every two weeks; we just oversee everything to make sure they’re hitting deadlines and we give them feedback.

We wrote an article about the professor who was accused of sexual assault; we felt satire could also be a good way to address issues like this. Sometimes comedic relief can be really helpful in getting through things, for me personally as well.

MD: Opinions, or “hot takes,” that are actively harmful are often passed off as just jokes or satire. How do you navigate that in terms of submissions that are potentially harmful?

GB: We have had a few instances where people will submit something and it’s like, “that really doesn’t sound right.” I think it’s our role as editors to look at it and walk them through why it’s not okay to want to say that, and why we wouldn’t publish it. We really dive into the underlying meaning of the “joke” and maybe offer a different perspective they can take so that it’s not problematic anymore.

GB: If anything, we’re mean to the administration. But we would never want to hurt any students on campus.

MD: It’s really easy for people to use the excuse of “that’s just my opinion!” or “it was just a joke!”

GB: Yeah, The Cut recently published an article about Priyanka Chopra and Nick Jonas that was only up for a few hours. It was racist. Of course the writer shouldn’t have written that, but it’s the responsibility of the editors to step in and say “this isn’t okay. I want to make sure that what you’re putting out into the world is okay and doesn’t hurt anyone.” It’s a huge responsibility, especially with humour, because it can be really easy to cross lines.

MD: Do you feel a responsibility to comment on current social issues and try to dismantle some of them through comedy?

CM: We definitely address current issues. A good example of that was the article we wrote about the professor who was accused of sexual assault; we felt satire could also be a good way to address issues like this. Sometimes comedic relief can be really helpful in getting through things, for me personally as well. It’s really important for us to help people do that too; sometimes writing it out in a satirical style can be a really good way to address issues and cope with them.

GB: Just like serious journalism can work to dismantle things from white supremacy to aspects of the patriarchy, I feel like satire can play its part if done correctly.

CM: And it can sometimes take a more personal voice too, which can be helpful.

GB: And there’s just so much to make fun of at McGill. And I like making fun of myself too.

MD: Is there anything else you want to add about politically-aware satire and the role of The Why Intersection in that?

GB: We definitely think politically-aware satire is really important, and I look at it as a way for marginalized people to take the spotlight and run with the humour and have full control over what’s being said. That’s really important to us because it could be a way for voices to be heard that aren’t being heard through other kinds of journalism.

MD: How do you make sure that your content remains accessible to students, as comedy can often be an exclusive and elitist space in terms of content, types of jokes, etc.?

GB: We try to emphasize that The Why Intersection is a platform for and by students without any university oversight. It’s completely independent.

CM: And we really try welcoming writers from any level of experience, especially if they have none! We view the site as a way to gain experience, and there are no boundaries in writing for us. For types of jokes and content, our writing staff and contributors make up who we are and what we publish, so it’s super important that we include viewpoints that aren’t necessarily prevalent in the pop comedy scene. We want our platform to be theirs.

The Why Intersection has been a great way for us to think critically about the small things on campus. It’s turning observational humour into a very structured headline.
– Grace Bahler

MD: What direction do you want to take the website in the future?

GB: We have big projects planned for this semester. We’re definitely going to dive into video production. We would also like to produce a variety show with sketch, improv, stand-up, really anything.

CM: I think a lot of our writers are really interested in those areas of comedy, so it’d be really interesting to let everyone have an opportunity to explore that as well. One of our big goals is to help people prepare for their future, especially people who want to go into comedy, so this is a good space for them to practice that in a comfortable way. It’s not competitive or anything; it’s just a fun way to practice it.

GB: It’s to get experience, because it can be really scary to try areas of comedy in front of complete strangers, especially because the comedy scene can be filled with a lot of older people. It’s terrifying as a university student to do that. I want to see this website really take off – the writers are amazing, Catherine’s amazing. It’s been so much fun just working on it, and I know if people keep putting in work, it can soar.

MD: What should someone do if they want to write for you?

GB: They can email us at thewhyintersection@gmail.com. They can also join “The Why Intersection contribz and writerz” group on Facebook. We post weekly pitch sheets on there.

MD: Can people pitch their own ideas to you?

GB: Yeah, we never pitch our ideas to them. Everyone writes their own. If they have a topic they want to tackle, they can message us on Facebook, and we’ll work through potential headlines together. But at the end of the day they’re the ones coming up with ideas.

MD: What has been your favourite piece that you’ve published or written?

CM: That’s my favourite too. That’s definitely my style of writing. My goal is to be a Reductress writer. I feel like I take on a lot of women issues that no one wants to talk about. My favourite article that I wrote was around Halloween. I was in my political science class and trying to figure out what I was going to wear to a Halloween party, and I wrote “Woman Uses Period Blood for Halloween Costume.” I wrote it all during my class, and I edited in a picture of this girl wearing a bloody costume.

GB: There are some wacky, weird ones, and some that follow the “satire formula,” so it’s kind of all over the board. I wrote “McGill to Salt Sidewalks with Students’ Tears” a couple of weeks ago. I liked that one. We also have the John Milton opinion column. It’s the ghost of John Milton; I write that one for him. It’s just a funny way to yell at students for being annoying. The “Lifestyle” section is definitely my favourite one, cause it’s kind of like Reductress.

GB: One of my favourite ones ever was also “SNL to Air on Mondays Pre-Recorded.” I thought that was so funny! And “Four Ways to Catch a Dick at Activities Night.” I loved that one. You can also tell which writers write which pieces because everyone has a very unique voice and it’s been really cool to see them grow into that.