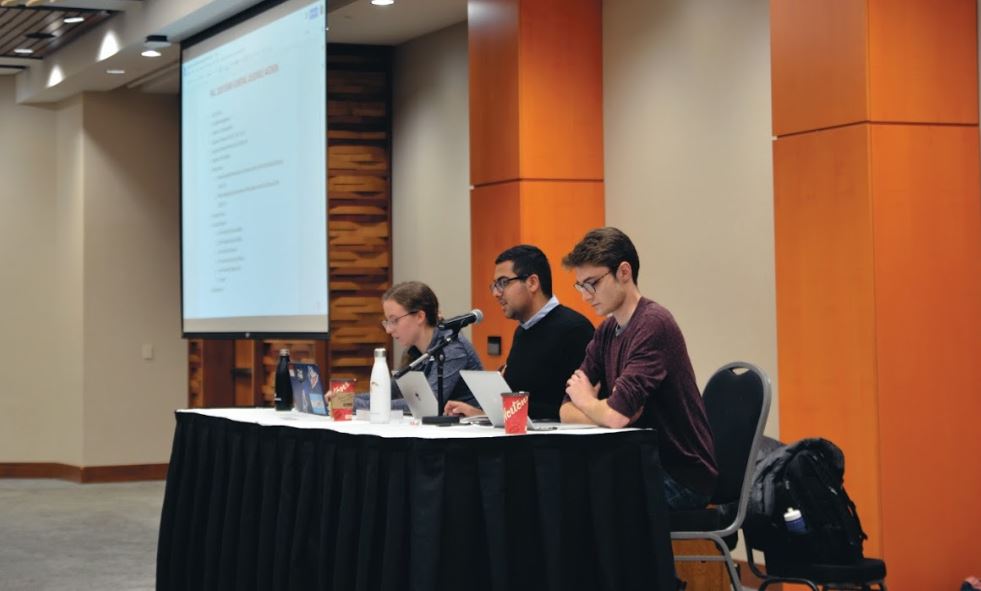 On October 29, about 50 students gathered in the New Residence Ballroom for the Fall 2018 General Assembly (GA). Because the quorum of 350 people was not reached, the General Assembly became a consultative forum. Any motions approved at the GA are now recommendations awaiting ratification at the November 1 Legislative Council.

The consultative forum passed the nomination of Members at Large for the Board of Directors and the Auditor for the Fiscal Year of 2019 for Legislative Council to consider. Executives faced questions about spending incurred by the aftermath of SSMU’s Halloween party at MacDonald Campus. Following students vomiting and trashing the buses on the way to the event, the bus company decided to not provide return trips. There is a clause in the bus company’s contract allowing them to refuse service if their buses are damaged. SSMU then told students to take cabs or Ubers, and that they would be reimbursed by SSMU for the trip. The cost of reimbursement was estimated by SSMU executives at the GA to be around $10,000. VP Internal Matthew MacLaughlin justified the cost by arguing that they could not let everyone pay for the misbehavior of some.
Current SSMU President, Tre Mansdoerfer, also presented a “blacklist” initiative which would bar students who have demonstrated harmful behaviour from participating at SSMU events.

During the question period, questions were raised regarding the newly deregulated international tuition for international students. VP University Affairs, Jacob Shapiro, responded that SSMU advocated for international tuitions not to be raised for current students, but that they would be raised incrementally for future students.
SSMU executives reported on their first semester, and on the new division of tasks since the resignation of former VP External Marina Cupido.
All their individual reports are available at ssmu.ca/ governance/general-assembly/ general-assembly-2018-2019.