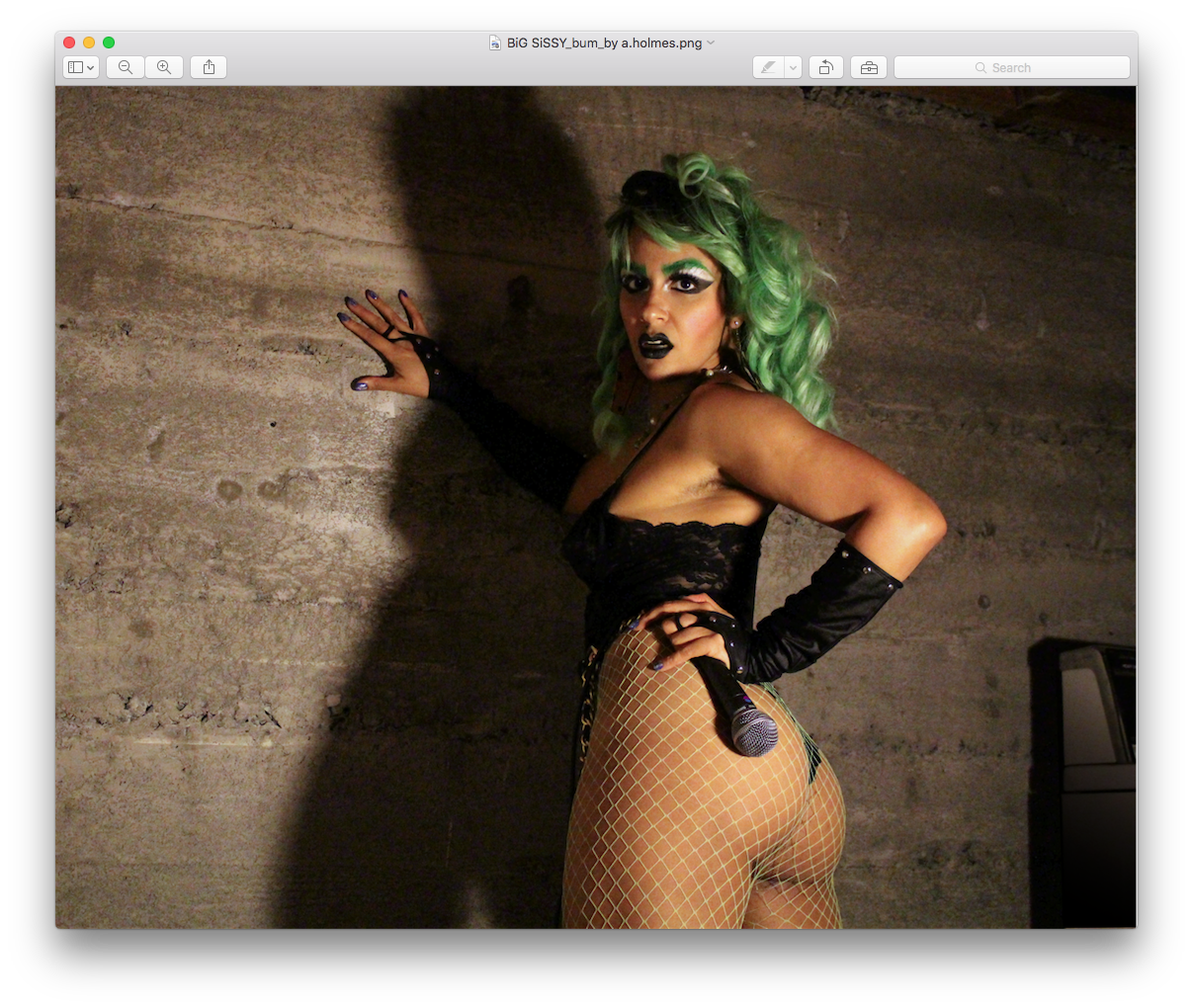 Athena Holmes (they/them) is a performing artist with two personas: Ms. Holmes, a roots, blues and jazz singer-songwriter, and BiG SiSSY, a drag performer from another planet. BiG SiSSY is from Black Star Planet, and her show is an Afrofuturist rock-opera. The McGill Daily sat down with Athena to chat about personas, performance, race, gender, black supremacy, and healing.

The McGill Daily (MD): Were your projects born at the same time, or one after the other? Were there any events in your artistic career or life that inspired your personas?

Athena Holmes (AH): They were not born at the same time. Ms. Holmes is my singer-songwriter project which I’ve been doing since I started playing music. [Ms Holmes] is for my own songs and ideas, or if I get a commission to write, I’ll write under that name. BiG SiSSY… I’m not sure what the catalyst for that starting was. I had seen some performances where people were doing things that made me really uncomfortable. I had to ask myself, “why does this make you uncomfortable? Is there actually anything wrong with what this person is doing? Why do you think they should be doing it differently?” I had to question my own judgments about what I thought was permissible on stage, or what I thought was the right way to act. I wanted an outlet where I could push my own boundaries as a performer in terms of what I thought was “okay” or “going too far,” and push myself outside of my comfort zone. As an artist, I try to push myself outside of my boundaries in life in general, but [BiG SiSSY] is sort of a safe environment where I can experiment and see what comes out.

MD: So, would you say that BiG SiSSY is yourself or an alter ego?

AH: It is an alter ego, but it is definitely a lot of me. I asked my friends who have seen BiG SiSSY, “what astrological sign do you think BiG SiSSY is?” and they were like, “well, obviously a Scorpio,” and I’m a Scorpio, too.

MD: How would an encounter between BiG SiSSY and Ms. Holmes unfold? Would they ever meet? If so, how?

AH: They do meet! They’re both in me!

MD: What would they say to each other?

AH: No! I’m still down to say the things that I say through BiG SiSSY in my other projects, but I would just say it in a more polite way.

“There is a bit of dissociation that happens when I look out into the crowd, looking specifically for black faces, and I don’t see them.” – Athena Holmes

On Race, Gender and Performance

MD: What is the relationship between your gender and your personas, or between identity and performance?

AH: As somebody who’s been raised or perceived as female and as being “pretty,” I’ve often felt like I was performing my gender. Equally, being a singer with a fairly clean-toned voice, I’ve been performing an idealized version of myself for mostly white audiences. Whenever people find out I’m a musician, they would remark, “oh, you sing jazz, right?” I know that’s what you want, I know you want me up on stage, in an evening gown, singing jazz… That’s how you want me. And I’ve never been interested in acting the way people wanted to perceive me.

I also wanted to perform as BiG SiSSY to understand gender better and to turn it into a source of freedom, as it didn’t use to be. I felt like society has told me, “you have these feminine traits that we find sexy, and you should show them off.” So, with BiG SiSSY, I just go at it at full force: my ass is hanging, and everything is on display – my hair is long, I’m hyper-feminized, and hypersexual. In a way, I do like to present my gender like that, but only when I want to. When I do it as BiG SiSSY, I’m in control and it also feels like a bit of a “fuck you, you want me to look pretty — well, how’s this?” But when I uphold these feminine stereotypes, it’s not for you; it’s not for the male gaze, because usually by the end of it people are slightly grossed out, which is nice.

MD: Do you recall any performance where you felt like your message was perceived the wrong way, or people weren’t understanding what you were trying to convey?

AH: As BiG SiSSY, I always feel great after the shows. I did do a show recently where I performed ‘Black Supremacist’ [a segment in BiG SiSSY’s performance], and I looked around and there were no Black people. The audience was very supportive of the performance, but I was kind of like, “what? What is this now?” Black folks have long been considered or used as entertainment for white folks. When I perform for mostly white audiences, it’s challenging, because I can’t help but feel the weight of that. Even though I’m doing the work for me, it’s a complicated dynamic.

“I like to present my gender [the way people expect me to], but only when I want to. When I do it as BiG SiSSY, I’m in control and it also feels like a bit of a “fuck you, you want me to look pretty — well, how’s this?” But when I uphold these feminine stereotypes, it’s not for you; it’s not for the male gaze, because usually by the end of it people are slightly grossed out, which is nice.” – Athena Holmes 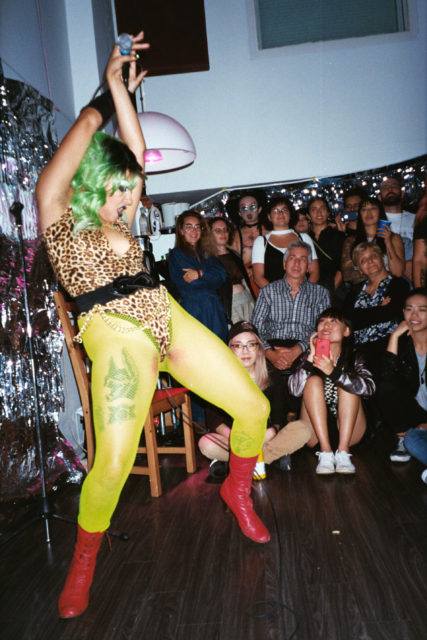 I also remember doing one performance where I had this video playing in the background of a Black preacher exorcizing a white woman. The sound of their voices was quite violent — she was speaking in tongues and everything. I wanted it to be representing an exorcism of the white devil specifically. Then, it cut to a song by Sister Souljah, and I went down on my knee with my fist up and I had somebody pass a hat, so that everybody could give me money.

MD: What would a Black supremacist society look like?

AH: I wouldn’t want it to look anything like a white supremacist society. In my utopic vision, it wouldn’t be a system of domination, even though Blackness would be ‘reigning supreme,’ so to speak. I feel like it would be more like an acknowledgement and a celebration of Blackness, and people not being afraid of it and instead actually embracing it and putting themselves outside of their comfort zone as a means of learning. There would be so much warmth and community, and more respect for children and elders. I feel like there would be a lot of laughing too, a lot of laughing at white people if they were mad about something, because then their power would’ve been stripped.

“I’ve often felt like I was performing my gender and performing an idealized version of myself for mostly white audiences for a long time.” – Athena Holmes

MD: What do you dream of?

AH: I think I dream of healing a lot. Because I think, again, under the white supremacist capitalist society that we live in, there is so much suffering, and a lot of it is unnecessary. As the oldest child in my family, I always wanted to bring people together to have real conversations and to initiate healing. I’m sure that to some extent, this bleeds into my performances too, in the way that I engage with audiences and how I invoke certain emotions that I think should be brought up. Hopefully, it’s a step towards healing. With BiG SiSSY, I don’t necessarily try to say anything in any kind of pretty, flowery way. I think it can be really cathartic to not have to be eloquent and to say exactly what you’re feeling, and especially to be able to do so in a public space.

The interview has been edited for clarity. 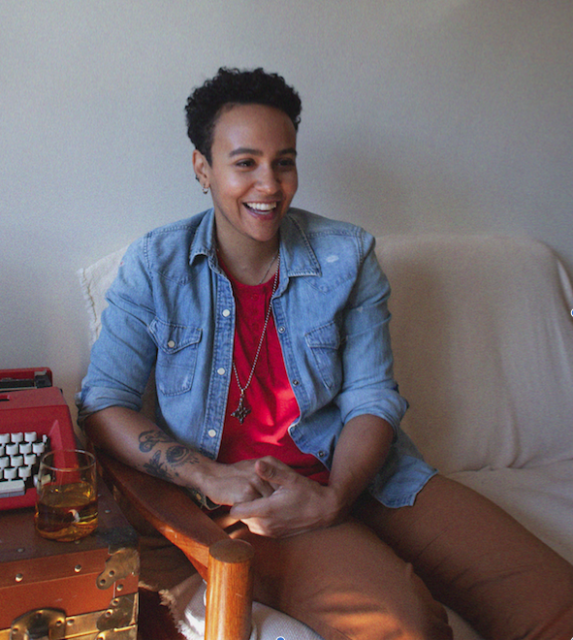