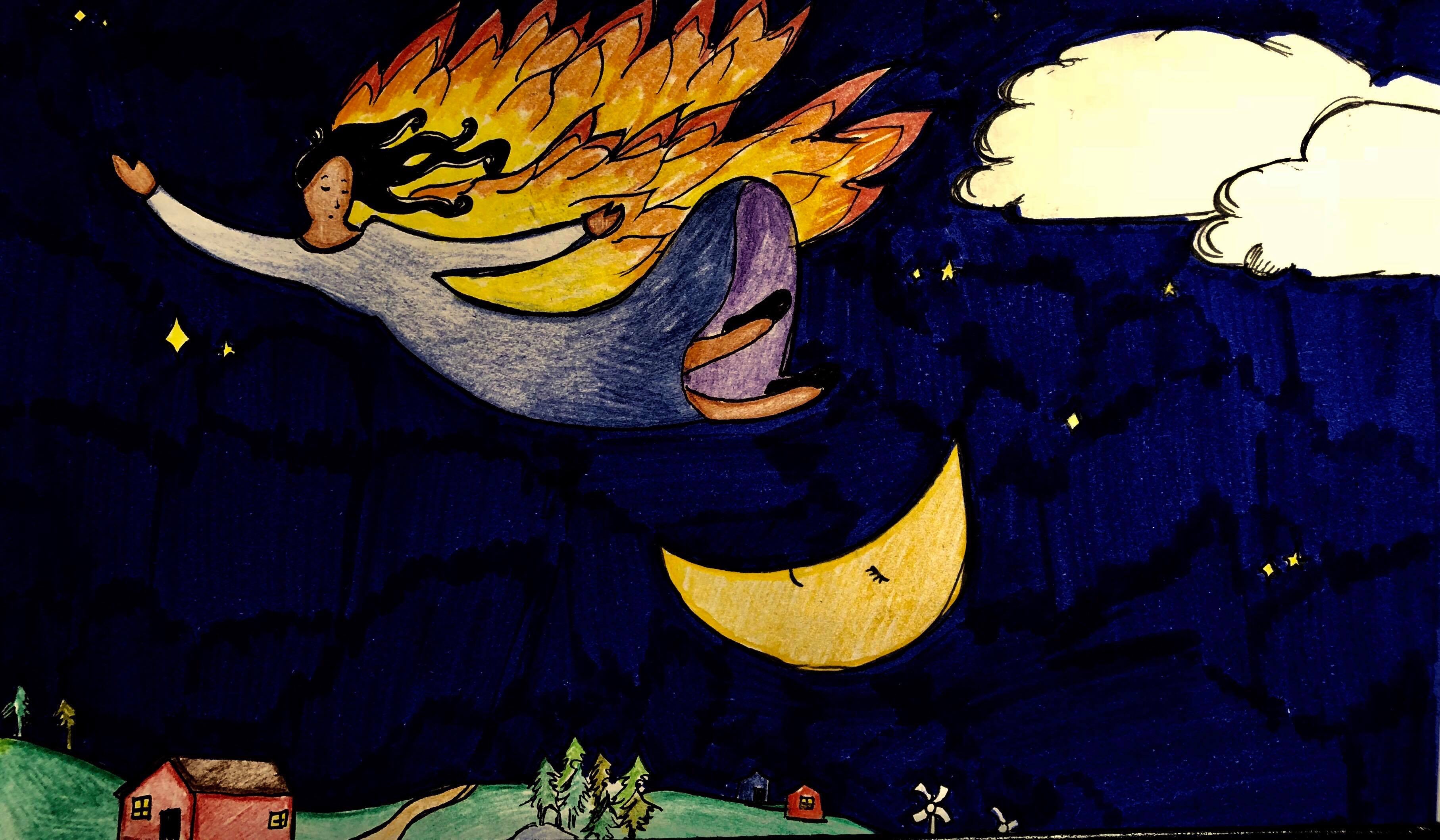 Thus Speaks Mother Simorq, a collection of sixteen short stories, is Azadeh Azad’s latest release. A sociologist, psychotherapist, art therapist, and self-proclaimed feminist based in Montreal, Azad lends her Iranian-Canadian identity and experiences to the stories she tells in her anthology.

I had the chance to interview her prior to the release of her book, and the conversation easily moved between discussions of Thus Speaks Mother Simorq, Iranian folklore, art therapy, and modern feminism. The conversation was in equal parts admiration of the perseverance of women and questions about her work as a feminist author and artist. The stories she shared situate her as an outspoken, self-assured Middle-Eastern woman, navigating her way through North American society.

Simorq, a mythical bird in Persian folklore who often exists as either male, female, or sexually ambiguous, is entirely feminized in Azad’s version of the tale. She is an all-seeing and all-knowing entity that appears throughout the stories of other women in the collection, to guide or to share her wisdom. Azad’s decision to make Simorq explicitly female subverts the common presumption that a mythical, sexually indistinct bird-person should be male.

No act of defiance is too small or too radical to be meaningful, and though never explicit in its call for action, these stories of female strength are a constant reminder of the need for feminism in big and small situations alike.

In addition to falling back on Iranian folklore, the book weaves aspects of magical realism into the stories of the 16 different women and their experiences of the patriarchy. Many of these stories, set between Iran and modern day Montreal, are authentic illustrations of the different aspects of womanhood. Azad tells tales of female resilience, female imperfection, and female bonds. In her depictions of female emotions, Azad celebrates the power of vulnerability and the importance of self-expression. In the second story from the collection, Safa of the Spring, the title character becomes so overwhelmed watching an emotional scene play out in front of her that every cell in her body begins to shed tears until all that is left in her place is her “fountain of tears.” When asked about whether the choice not to conceal negative emotions throughout the book was a conscious move, Azad responded, “I just wrote it that way to show the depth of her sorrow. That was my only goal. [The tendency to hide our emotions] applies only to Western societies; expressing emotions too intensely is not viewed as good here, but in the Middle East, outbursts, especially crying, are very normal.” 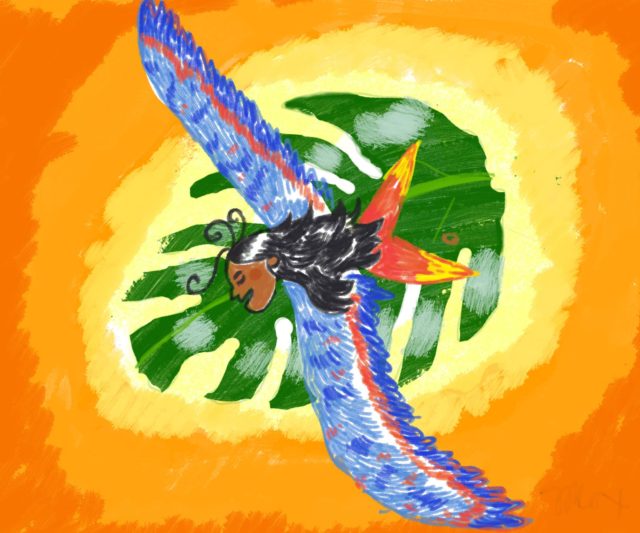 The sixteen short stories are filled with unwavering messages of female empowerment, and while some are more explicit than others, the book believes in the power of every patriarchy-defying move women make. These moves range from a wife walking away from her husband after a fight in Her father’s portrait, to a woman dressing up as a man from 20th century Tehran and fully integrating into male social circles only to narrowly avoid arrest through a combination of luck and careful strategy in Outside of the Box. No act of defiance is too small or too radical to be meaningful, and though never explicit in its call for action, these stories of female strength are a constant reminder of the need for feminism in big and small situations alike.

At times, Azad’s stories are deliberately provocative, and when asked about which story she enjoyed writing the most, she cited the final tale — a modern and controversial take on the story of Siavosh, a figure from Persian mythology. She explained that “Iranians are very sensitive to their mythical heroes. You can’t say anything against Rostam. He was a male chauvinist, a mythical national hero of Iran. He and Siavosh are very misogynistic; they are women-killers. I enjoyed showing them as they were. Especially Siavosh, as he shows signs of [mental illness] and exhibits schizophrenic behavior in Ferdowsi’s The Book of Kings. So, I made him a schizophrenic in this story. Many Iranians won’t like it when they read it. And that’s okay with me.”

As the conversation moved from Thus Speaks Mother Simorq to feminism and life as a woman, Azad proudly announced that she was a feminist, saying, “I have always been a feminist and I still am. What I have seen and felt since I was very young is the basis of my feminism. My feminism didn’t come from reading books, it came from my observation of my environment.” This prompted a conversation about the differences between Western and Middle Eastern feminism. She debunked the cliché of Middle Eastern women being more submissive and more oppressed than Western women, explaining that Middle Eastern women “are, and have to be, stronger” than Western women. For her, men envy the authority women have in the household as it represents a threat to their power and perceived superiority outside of home. Azad said that the individual efforts women take to shift traditional gender roles are a source of collective female power, ranging from political to personal subversions of these views.

Azad expressed her conviction that portrayals of female strength are crucial, as they dismiss the idea that female characters only fall into categories of “good” or “evil.” 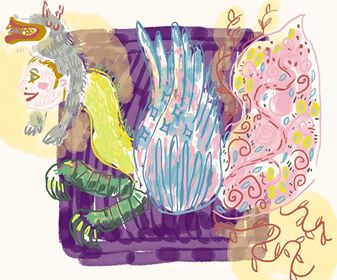 She went on to explain that the reason she felt it was important to write this book was not to declare the superiority of one sex over the other, but to bring light to the collective struggles and strengths of women around the world, all of whom are ultimately fighting the same struggle but in different ways.

Her feminism, as she explained, is not bound to literature. Azad is also a painter, and has worked on art that is “beautiful, but at the same time says something.” There are many shapes with which she expresses her activism in art, ranging from images of domesticated brown women to work that is more overtly political and which directly subverts the patriarchal expectations of Middle Eastern women. An example of the latter depicts an Afghan woman sitting on a hill, using her burqa as a picnic blanket while wearing Western clothes. Azad expressed her conviction that portrayals of female strength are crucial, as they dismiss the idea that female characters only fall into categories of “good” or “evil.”

My discussion with Azad highlighted that vulnerability isn’t inherently bad: emotional nakedness can be a source of strength for women and for all people. I asked the writer what advice she would give women navigating modern society. Her reply was a confident affirmation of the power of self-love as the basis for all other relationships. Azad also stressed the power of female solidarity in allowing women to persevere through patriarchal social barriers to succeed. Azad’s words, both in conversation and in Thus Speaks Mother Simorq, were welcome reminders of the importance of female empowerment and resilience in our collective stories.