Whose violence is acceptable?

On the biased perception of violence 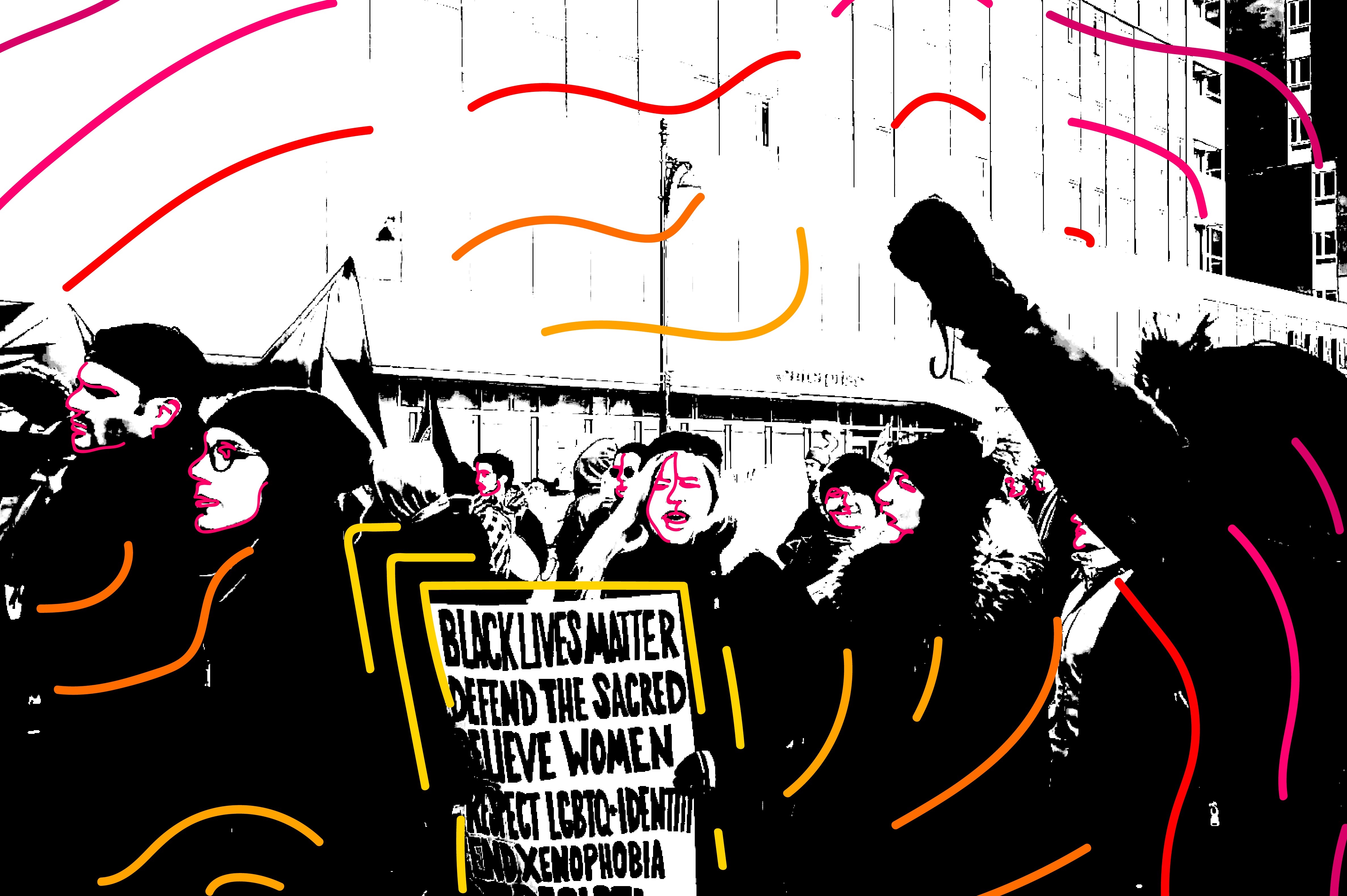 Last Thursday, tens of thousands of unions and public sector workers flooded the streets of Paris. As a response to Macron’s new labour reform laws and belt-tightening plans, workers in the public sector, such as train drivers, teachers, nurses, and air traffic controllers have accused him of “seeking to dismantle the state sector.” Similar protests took place in over 180 cities across France, with more than 400,000 people mobilizing to express their dissent. The protests were mainly peaceful and nonviolent, with only minor scuffles with police officers on the outskirts of Paris and in some small cities. In these areas, police arrived in full riot gear, firing water cannons and tear gas to disperse the protesters. The relatively nonviolent protesters are already being labelled in the media as violent and chaotic, with reports stating that the police officers’ actions were necessary. Yet reports from the ground continue to refute this fact.

In the reporting that has been conducted over the past year, descriptions of these protests and countermovements continue to be presented as incontestable accounts of the reality of what actually happened on the scene. Reports of violence are never missing from these articles. But there are questions to be asked: Who decides what is violent and what is not? Who creates the boundaries between acceptable and unacceptable violence?

Missing and murdered Indigenous women are neglected by Justin Trudeau and the Canadian government in the Canadian government’s reporting of these lost lives as merely policy concerns. Reports of Indigenous protests responding to gross injustices, such as these, are eager to highlight even minor events as “turning violent.” But what about violent protest is unjustifiable when the negligence of the government is deemed necessary and acceptable?

Across the border, we see more examples of the dichotomizing that occurs between violent and nonviolent forms of protest. Trump’s decision to take action against the Syrian state in April was supposedly due to the release of images and videos showing Syrians being attacked by chemical weapons, allegedly deployed by the Syrian government. These attacks by the Syrian government on their citizens have since been denied and proven to lack concrete evidence. These images supposedly “moved” Trump to approve missile strikes, with Justin Trudeau and Hillary Clinton both wholeheartedly backing his decision. In this situation, the violence in Syria was deemed unacceptable. Yet Black and Brown protesters across the country, both in and out of prison systems, are being pepper-sprayed, attacked, and killed by the police, but the government does nothing — simply because this violence is labelled as acceptable. This violence is necessary and justified. While reports of the Syrian missile strike are bipartisanly defended, retaliation against police officers is considered both unacceptable and an “attack on democracy.”

As writer Devyn Springer describes: “the concept of ‘violence’ is constructed at a young age to be something always done unto the US and never perpetuated by the US. The US would not paint itself as an aggressor in any instance, presenting subjects like slavery, colonialism, and foreign regime changes through a lens of benevolence rather than the actual violence they represent.” The same description can be applied to many Global North countries: violence is often described as a “necessary evil” if it furthers the interests of the “empire,” but is wholly unacceptable when it questions the authority of the state or its processes.

During Obama’s presidency, drone warfare used in predominantly Black and Brown countries reached a record high. Yet people claim to yearn for the “good old days” when Obama was President. It is rare that someone points out in mainstream media that he was violent, just not in the way that’s usually vilified. His use of drone strikes killed thousands of innocent people overseas, yet drone strikes are critiqued far less than, for example, a powerful and important protest, which led to nothing but property damage, such as broken windows. Why was Obama’s use of violence excusable? Why was it necessary? Why do we continue to justify and even glorify it? Invoking the concept of “national security” is a thinly veiled cover for “furthering the empire.”

Obama’s military action in Muslim countries was also instrumental in creating a reductive, narrow-minded definition of “terrorism.” The current mainstream image of terrorism is almost indistinguishable from Muslim extremism, and uses Islam as a scapegoat and catch-all for this type of violence. The incorrect designation of the term “terrorism” as a catch-all for a specific group’s actions perpetuates these purported acts of “terrorism” enacted by the Global North. Interference, often unnecessarily, by the Global North often relies on this image of Islam as the one true source of terrorism. This then excuses any terrorism that the state itself might participate in: “when nearly 90 per cent of drone strikes in places like Somalia and Yemen don’t hit their target, injuring civilians, at what point do we understand it as a terrorist act?” In this case, terrorism should be viewed as more than the reductionist mainstream media depiction of Muslim extremism; but rather, as any internal or external action.

Capitalizing on the former reductionist, parochial version of terrorism allows Canadian and American governments to continue supporting and engaging in what might otherwise be considered terrorist acts without having to face criticism or questions. The state justifies its own international (military) and domestic (police) terrorism as necessary to fight the version of terrorism they’ve helped create – one rooted in reductionist bias.

The J20 protests at Trump’s inauguration resulted in a record number of arrests and charges. Attorneys and activists both claim that no one expected a prosecutorial response so extreme, nor charges so unprecedented. Almost every arrestee was individually given their respective set of charges, to the point where 200 people were charged with the breaking of one bank window. The protesters were accused of “looking to incite violent riots,” among other questionable claims. Despite the hundreds of people killed overseas and locally by the state and state actors, the damaging to private property was the “violent and illegal” crime. Again, “violence” is applied selectively, chosen only when it threatens the regime. Many of the detainees from that day are still looking at a possible 60 years in prison.

Even relying or calling upon liberal conceptions of human and “legal” rights is limiting. The defense of the discussion should not be limited to what the state deems human or civil rights, as the state itself is founded on institutions of racist subjugation. Just because breaking a bank window during a protest is deemed “unjustifiable,” while drone strikes on innocent civilians in the Global South is “acceptable” and “legal,” this does not mean we should automatically assume one has greater legitimacy than the other.

The good protester/bad protester dichotomy is similarly flawed. This binary implies that once a “good” (read: lawful) protester crosses some arbitrary line into the “bad” category, the state can (and should) commit violence against them. The violence of the protester (no matter what motive or intentionality) is unacceptable to them; and the violence the state inflicts upon that protester is therefore justified. In an article for the Huffington Post, Indian author Arundhati Roy warns us against swapping the grand pursuit of justice for the far smaller demand of human rights. She writes: “Too often, these rights become the goal itself… Human rights takes the history out of justice.”

When Canada and America deploy their “fight for justice” overseas and domestically, is it rarely completely nonviolent. Governments are often very vocal about their terroristic military and police action and celebrate it as necessary and “acceptable” violence. Yet any even mildly violent movements within the country, against the state government, are quick to be labeled as egregious and reprehensible. Why do we unquestioningly accept the discourse around these protest movements? When do we recognize violent insurrection as an appropriate and measured response? Why do we continue to assume the government will listen to us? When do we realize that the government’s violence is more unacceptable than anyone else’s?