Building robots: from scraps to treasures 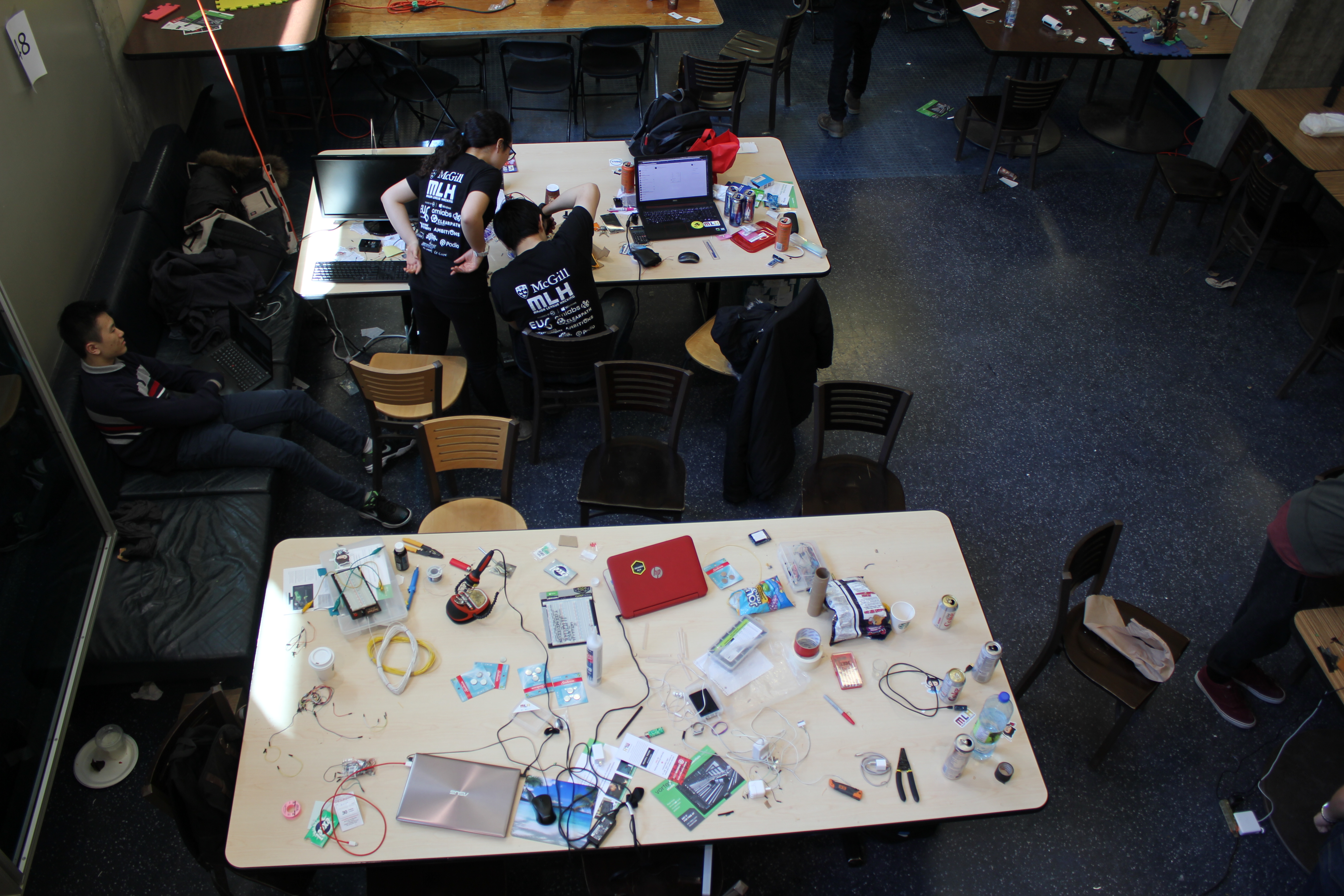 Bravely ignoring the impending doom of finals season, robotics enthusiasts gathered in the Trottier building on March 25 and 26 for the second installment of Robohacks, a 24-hour long event that attracted students from as far as Cornell University to pursue their homebrew robotics dreams. From Saturday morning to Sunday late afternoon, energy drink-fueled tinkerers wandered the halls of Trottier exchanging ideas, building robots, and experimenting with hard-to-obtain hardware.

Sponsored in part by Major League Hacking, the authority in large-scale college hackathon organizing, the event was staged around the theme of space and space-related technology. With a mix of McGill professors, industry delegates, and Canadian Space Agency representatives as judges, motivation to work through the night was easy to find.

A few days after the event, The Daily sat down with Sabrina Zhu, Shammamah Hossain, Molly Shen and Jeremy Mallette, four members of the Robohacks organizing team, to chat about the history of Robohacks and its impact in the community.

An inclusive hackathon
Organized for the first time in 2016 with a shoestring budget, Robohacks is the brainchild of a handful of McGill Robotics members who not only had a passion for the projects their design teams were working on, but also eagerly wanted to communicate their love for robotics to others. From less than 150 attendees last year, Robohacks grew into a sizeable event that received around six hundred applications for around three hundred spots. This growth is not solely due to the resounding success of the first iteration of the hackathon, but is also a tribute to the organizing team’s year-round promotional initiatives, which included targeted outreach to a handful of Montreal CEGEPs and schools.

While the Robohacks outreach effort does promote the event, its main objective is not simply to bring people to the competition. Shen explained that the bulk of their work is showing people that “building robots really isn’t that complicated and that anyone can do it.” This philosophy of inclusivity stems from McGill Robotics’ core principles of giving prospective members a chance by working on a “trial project” meant to showcase not their ability to build a functional robot but their determination to see their idea through to completion.

With that in mind, racking up more “hackathon glory” won’t help you get the sought-after acceptance email: Hossain and Zhu explained that Robohacks deliberately prioritizes those who are passionate but have had limited exposure rather than those who are most likely to build spectacular machines that will woo the judges. This way, applicants who may have less of a chance in other more competitive events fare better.
While it falls under the broader “hackathon” label, Robohacks is significantly different from other events of the genre. As a robotics-centred competition, participants are tasked with building a robot, however simple it may be. Beginners are not left to their own devices either: the presence of McGill Robotics members, mentors, and industry representatives on site provides invaluable advice and support to those who have questions. “The important part is not to know how to do it, it’s to want to do it,” commented Shen.

A space for experimentation
Building robots requires raw materials, from bits of cardboard and duct tape to electronic components and soldering kits. Cost has always been hobby electronics’ major barrier of entry. However, the Arduino and Raspberry Pi development boards, affordable microcomputers as big as a deck of cards, certainly lowered the bar and made elaborate hobby electronics more accessible, but a significant amount of money is still necessary to get proper projects off the ground.

Events like Robohacks are a good occasion to experiment without any egregious expense. Participants were given anything from ultrasonic sensors to microcontrollers to build their dream machines, which left imagination and time as the only limiting factors to creation.

According to Mallette, the “hardware room,” where participants could borrow components, use power tools and try out 3D printers to produce the custom parts they needed was extensively stocked. “I could probably pay for two years of [tuition] with all of that,” he commented. “That’s my favourite part of the competition: it gives these resources to a bunch of people who would otherwise never get a chance to use things like the Oculus Rift and the Amazon Echo [editor’s note: a virtual reality headset and voice-activated “smart speaker,” respectively] and experiment with them.”

From the exhaustion and hype arose robots that accomplish feats like mimic the way spiders walk, track satellites travelling tens of kilometres above ground, and wander around waving their robot arms at attendees. By the end of the weekend, those who stuck around all had something to show for it, whether it was a semi-functional project for the judges, or a newfound friendship built at 2 a.m. the night before.

Hackathons done right
As Sunday afternoon came to an end, the Trottier building was restored to its former state and no trace of what had transpired during the weekend, save for a few stray jumper cables, was left behind. Despite not being the only hackathon in town, Robohacks did something other events often fail to do: it prioritized community and inclusivity, and embodied the spirit of collaboration and education that was originally at the core of most hackathons. It also didn’t fall for invasive corporate sponsorship that pegs participants against each other in the race for the grand prize.

As the hackathon scene becomes larger and larger, it’s important to highlight events that aren’t about brands or awards, but that prioritize having fun with technology and introducing new people to the club. Robohacks is certainly one of such events.